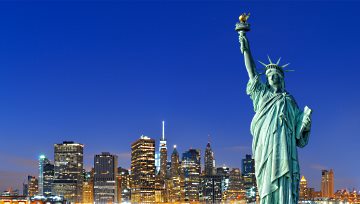 - Today marks the start of the Jackson Hole Economic Symposium, but tomorrow is when interest really ramps up as we’re getting speeches from Janet Yellen (10 AM ET) and Mario Draghi (3 PM ET).

- The U.S. Dollar hasn’t set a fresh low since August 2nd, and this would be the longest that the Greenback has been without setting a new low since April.

- If you’re looking for a bigger-picture forecast around the U.S. Dollar, check out our USD Forecast for Q3.

A sense of calm remains across global markets (exception being the cryptocurrency that goes by the name of ‘Ripple’), as today marks the start of the Jackson Hole Economic Symposium. Tomorrow is when matters really get interesting, as we’re going to hear from both Fed Chair Janet Yellen and ECB President Mario Draghi. While the theme of the event is ‘Fostering a Dynamic Global Economy’, the bigger question will revolve around the prospect of quantitative tightening. As the Fed has now pushed three rate hikes through in the past nine months, they’re now looking to begin reducing the balance sheet that had ballooned to over $4.5 Trillion during their multiple rounds of QE. In Europe, investors are pricing-in the very realistic prospect that the ECB will start to slow down their own stimulus program; and for the first time in over nine years we will have a world that might not being funded by liquidity programs from one of the world’s two largest economies. So while there will likely be much glad-handing and numerous press events, there are some very real questions on investors’ minds as we go into this widely-watched event.

One area of intense interest as we go into Jackson Hole is whether the U.S. Dollar is in the process of carving out a longer-term bottom. DXY set a fresh low on the second trading day of the month, but since then has been unable to break-lower. This would be the longest that the U.S. Dollar has went without making a new low since March/April. This isn’t quite a bullish scenario yet, as sellers remain vigilant around resistance and the past week has brought in a series of lower-highs. But the simple fact that the Dollar has stopped making new lows, at least temporarily, highlights the potential for a return of bullish price action as we near the really big fundamental driver of Jackson Hole.

While the U.S. Dollar has been in the midst of an aggressive sell-off since April, USD/JPY has built into a rather consistent range. Support has shown around 108.20-108.85, while resistance has remained around 114.50. Given the pair’s prior proclivity to trend, pretty much on the basis of risk aversion/tolerance, traders can go into Jackson Hole looking for a range-break to lead into a directional move. If support gives way, themes of USD-weakness will likely remain attractive, and this is something that traders can apply to another pair where a weak Dollar is matched up with a strong currency, such as the Euro, as we discuss below. But if we do see the Dollar actually confirm a bottom around Jackson Hole, USD/JPY could be an interesting way to play a bigger picture reversal in USD.

EUR/USD with a Vigilant Defense of Support

The pair that will likely be at the front of currency traders’ minds as we go into Jackson Hole is EUR/USD. EUR/USD is the most popular currency pair in the world, and there isn’t even really a close second place competitor. The pair represents the world’s two largest economies, and for the past nine years each has been sponsored by some form of Central Bank liquidity. This has led to quite the rollercoaster; when the ECB announced their QE program in 2014, this led to a significant run of weakness as markets attempted to front-run the ECB. But after setting support in the first week of that program actually starting, the pair oscillated in a range with a downside bias for the better part of two years. As growth and inflation began to show with a greater degree of consistency in Europe as we came into the New Year, bulls started to return to the single currency, and this has led to the opposite scenario of what happened in 2014, when markets priced-in European QE before it ever even started. As we walk into Jackson Hole, traders are trying to read to read the tea leaves to gauge when exactly the ECB might make this announcement. Mario Draghi speaks tomorrow, and he could possibly mention something there, but more likely we’re looking at the ECB meeting in the first week of September (two weeks from today) for any such proclamation.

Euro bulls remain active. We discussed a key support zone in the pair earlier in the month, and at this point, that support zone remains respected. If we do get any confirmation of the ECB’s plans to begin tightening policy, this could bring on another fresh high as the pair moves up to the 1.2000 level. But – if Mario Draghi does what he’s been doing for the past four-plus months, inserting dovish language and denying that the ECB is looking at tapering just yet, this could bring on a break of support in EUR/USD that can open the door to longer-term bullish continuation strategies. Below, we look at two support zones below the current area that could be utilized for such an approach.