Dollar Falls on U.S. CPI Miss: Next Week is Big for the Risk Trade

- The U.S. Dollar moved-down to a fresh weekly low after another soft U.S. CPI report.

- The potential for risk aversion continues to show across the FX market, and the Japanese Yen could be a prime candidate for playing either a continuation or a reversal of this theme.

The Dollar is heading-lower again as we move towards the close of this week’s trading. The driver for this bearish move has been another item of soft U.S. data, as inflation numbers came-in below expectations with headline CPI for the month of July coming in at 1.7% versus the expected 1.8%. And as our own Christopher Vecchio noted earlier this morning, this disappointment in CPI comes just weeks after the Fed raised concerns around lackluster inflation.

DXY spent much of the week clinging to the bullish move started at last Friday’s NFP report. While bulls were unable to run away to fresh highs, support continued to show above this week’s higher-low, giving the illusion of a potentially bullish move in the Dollar. But as we said to open this week, traders would likely want to be patient if looking for a continued move of USD-strength; as the Greenback has been smashed throughout 2017 for a variety of reasons, few of which look ready to abate. Soft U.S. data has been one of those factors, as the slowdown in the U.S. economy after this group of recent rate hikes is putting the Fed in a more defensive position. If we combine this with the prospect of balance sheet reduction, which the Fed has alluded to numerous times, and we may not be seeing any rate hikes out of the U.S. anytime soon. 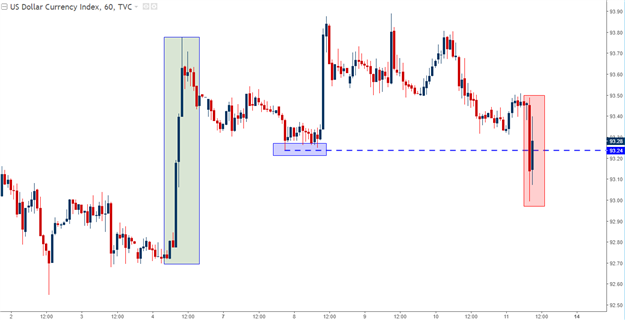 As we noted yesterday, risk aversion has begun to show in the FX market, and given the price action response, it would appear that concerns around the U.S. stand-off with North Korea over the country’s nuclear ambitions is not going unnoticed by markets. The S&P 500 started a bearish reversal on Tuesday afternoon, and that syncs up with the ‘fire and fury’ tweet from U.S. President, Donald Trump. That risk aversion has continued to show in many key asset classes, and stocks spent much of the remainder of the week driving-lower. We are seeing a bounce after this most recent CPI miss, but the big question is whether or not bulls will respond to this dip; or whether they’ll take a back seat while the situation around North Korea continues to develop.

This move has also shown across the FX market, specifically in the Japanese Yen as investors have bought JPY under the apparent drive of risk aversion. USD/JPY and the S&P 500 have been tracking fairly well over the past week as risk aversion has started to spread. On the chart below, we’re adding USD/JPY as an overlay to this week’s price action in the S&P 500. 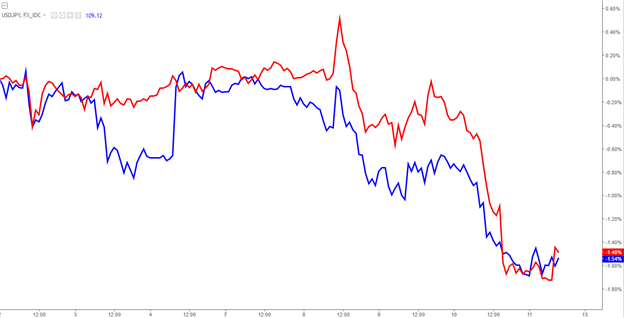 Next week brings on a series of key data points; and in the week after that, we have the Jackson Hole Economic Symposium. Mr. Mario Draghi is supposed to make an appearance at that summit, and this is just two weeks ahead of a key ECB meeting in which markets have started to anticipate some type of announcement that may signal the bank’s exit strategy from their massive QE program. Market’s ‘spidey sense’ will be on high alert, looking for any potential clues that Mr. Draghi may be willing to offer.

Next week starts off quickly with the release of preliminary GDP numbers for the second quarter out of Japan on Sunday night. As we looked at above in USD/JPY, the Yen has seen a fair amount of strength this week as investors have tightened-up risk outlays over the past week, and this has sent USD/JPY below a number of key support levels.

After this morning’s rush of USD-weakness on the back of that CPI report, USD/JPY moved-down to set a fresh four-month low. At this point, buyers have responded to that fresh-low, but as price action remains subdued below the key level around 110.00, traders would likely want to keep the potential for a continuation of risk aversion as theme of interest. 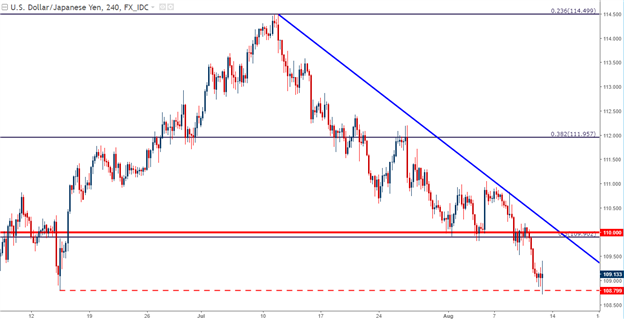 On Tuesday of next week, we get German GDP numbers for Q2, and this is followed by Euro-Zone GDP numbers on Wednesday. This will likely be a highly-pertinent print for Euro price action, as markets are continuing to bid the single currency-higher under the apparent presumption that the ECB will move away from stimulus in the near-future. On Thursday, we get meeting minutes from the ECB’s July rate decision, and any clues contained in here signaling the potential exit from QE will likely be a significant market driver for the Euro into week-end.

EUR/USD spent much of this week cauterizing support at a confluent zone that runs from 1.1685 up to 1.1736. Each of these levels are longer-term Fibonacci retracements, and after prices began to pullback after last week’s NFP report, buyers have responded to this zone. Price action posed a quick move up to a fresh swing-high after this morning’s CPI report, but at this stage, bulls have been unable to continue to drive the move. This alludes to the potential for continued grind in the pair, as an overbought Euro and an oversold U.S. Dollar each face a bit of pullback in those prior themes. 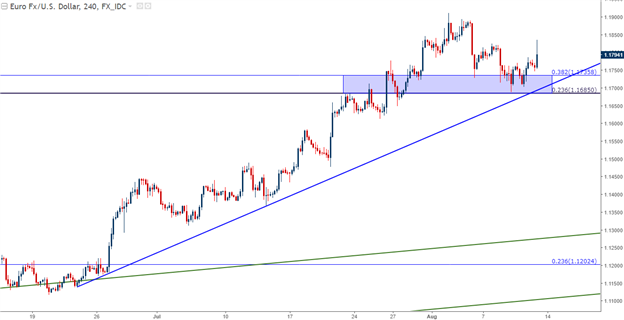 Also of relevance on next week’s calendar is British inflation. The British Pound has been rather weak after last week’s Super Thursday at the Bank of England. After previously posing a bullish move on the back of stronger inflation numbers in June, the Pound saw weakness after last week’s BoE meeting seemed to eradicate the possibility of a longer-term hawkish shift at the BoE. Next week’s inflation print is the first after that BoE meeting, and if we see continued erosion in inflation in the U.K., this would remove even more pressure from the bank having to look at near-term rate hikes in the effort of tempering those higher prices. 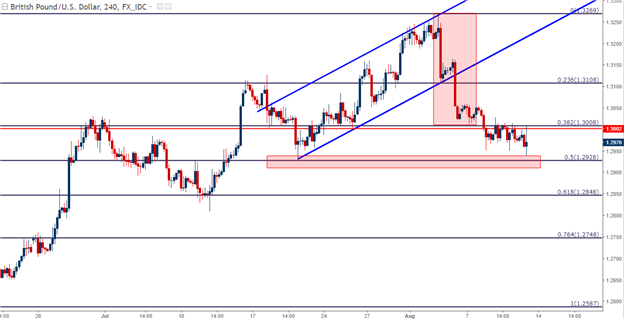 As we discussed yesterday, the Yen appears to be the push-point around this recent theme of risk aversion. If we see risk aversion continue to price-in to the market, we’ll likely see a continuation of Yen-strength as traders and markets further unwind carry trades. This potentially strong Yen could be paired up with a weaker British Pound in a short-side GBP/JPY setup. On the other hand, if risk aversion abates and Yen weakness begins to show again as cooler heads prevail, pairing that weak Yen up with what’s been a really strong Euro could allow for an extension of the pair’s topside move.