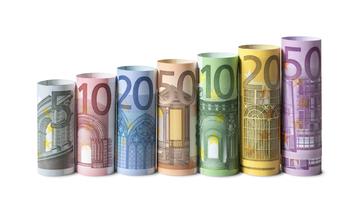 - Central Bank rate decisions were held out of Japan and Europe over the past 24 hours. Both banks attempted to take a dovish outlook to markets. One appeared to work while the other, so far, has not.

- While the BoJ decreased inflation forecasts, a dovish series of comments from Mario Draghi was unable to bring the Euro-lower. Bulls pounced on a support test ahead of the press conference.

Yesterday we looked at the high probability of the European Central Bank taking a dovish outlook to markets at today’s rate decision and press conference. This very much fit the pattern of how the bank has communicated with markets throughout this year, as the ECB rate decisions in April and again in June saw a rather dovish outlook despite the rising growth and inflation figures that had been seen in the bloc.

At today’s meeting, Mr. Draghi echoed the prior comment that the bank stands ready to increase the size and duration of asset purchases, while also saying that measures of underlying inflation remain low and that a ‘very substantial’ degree of accommodation is still needed in the euro area. This is all very dovish, especially for an economy that’s been showing continuing signs of improvement. As the icing on top, Mr. Draghi also said that tapering QE has not yet been discussed…

But as we had asked in yesterday’s article – the bigger question is whether or not this would ‘work’ in bringing the value of the Euro-lower. In April and then again in June, we saw a bit of weakness develop in the Euro after those dovish pleas from Mario Draghi. But buyers came-in at support around each instance, and within weeks the Euro was flying-higher again. At this morning’s meeting, the Euro put in a test of support around 1.1480 before Mr. Draghi took the podium, at which point bulls took over to re-drive prices back towards prior highs. Bulls were rather active, showing that few in markets were believing that the ECB is going to remain as dovish as they appear.

EUR/USD had put in two days of retracement after setting a fresh 2017 highs around 1.1580. Support showed-up 100 pips lower, and as Mr. Draghi began speaking – the pair began to rip-higher, highlighting that despite Mr. Draghi’s dovish pleas, markets are expecting the ECB to get ‘less loose’ at future policy decisions. 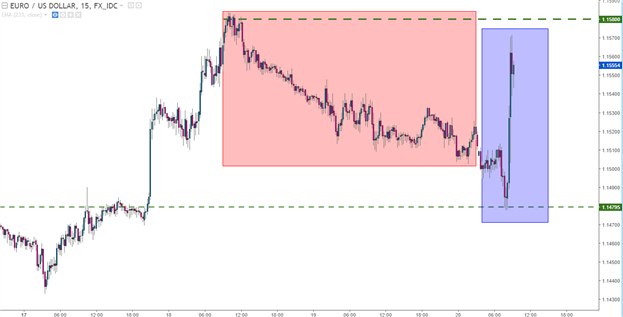 From a bigger picture perspective, the 2017 bullish trend in the Euro looks set to continue. We’re nearing some interesting potential resistance levels at 1.1615 and 1.1714, with the former of those serving as the final profit target in our prior Analyst Pick. On the weekly chart below, we’re looking at EUR/USD’s 2017 bullish trend making a fast approach towards both one and two year highs.

IG Client Sentiment remains stretched in EUR/USD, as 2.89 traders are short for every one long (as of this writing). Given retail sentiment’s contrarian nature, this is bullish for the pair. 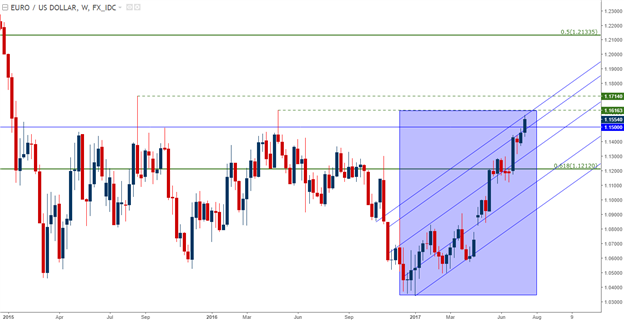 At the Bank of Japan rate decision in the overnight session, no changes were made to monetary policy and the bank decreased forward-looking inflation forecasts while increasing expectations for growth. The lower expectations for inflation mean that the BoJ is even further away from the 2% target that’s become so elusive, even in light of the continued improvement that’s taking place within the economy. At this point, the BoJ is not expecting to see 2% inflation until FY2019, which means 2020 given that the Japanese fiscal year begins in April; and this can allow the bank to remain rather dovish in the immediate future as inflation ticks-higher in Europe and the U.K. while remaining subdued in Japan.

The net impact to the Yen was one of weakness, and USD/JPY caught a bid to rise to the top of the support zone that we’ve been following, running from the price of 111.61-112.40. Within this zone are three different long-term Fibonacci levels that have helped to set support and resistance in the pair on multiple occasions over the past year-and-a-half. On the hourly chart below, we’re looking at USD/JPY testing the bottom-end of that zone around 111.61, highlighted in blue; and then running to the top of the zone around 112.40, highlighted in red. 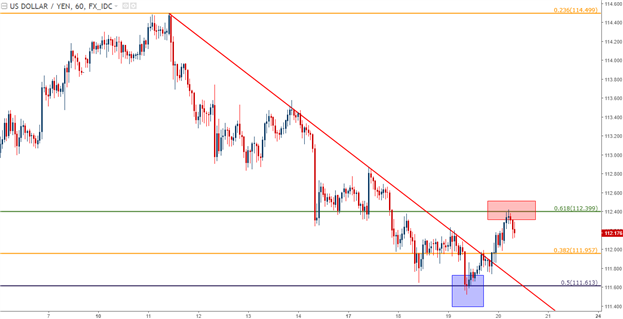 Is the Bullish Move in USD/JPY on the Way Back?

From mid-June into early July, Yen weakness was one of the most predominant themes across FX markets. USD/JPY ran all the way from below 108.80 up to 114.49, which happens to be the 23.6% Fibonacci retracement of the post-Election move in the pair.

But over the past week, that bullish trend has been retracing, and yesterday saw the 50% marker of that most recent bullish move show-up as support around 111.65; and after last night’s BoJ meeting, the pair has moved-up to test the 38.2% retracement level of that same move. This gives the appearance that bullish continuation strategies could be an available option for traders, and these levels can be usable for near-term entry scenarios. 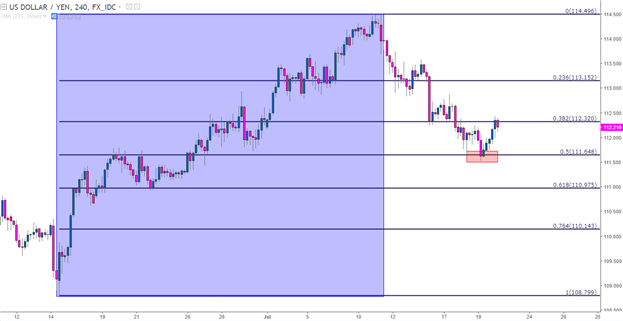 For traders looking to take on bullish exposure, the low that came-in around that support inflection can be used for stop placement. For those that would prefer a bit more confirmation of continuation potential, awaiting a topside break of the 112.32-112.40 area can help; after which traders can look to treat ‘old resistance as new support’ in the effort of catching the higher-low.