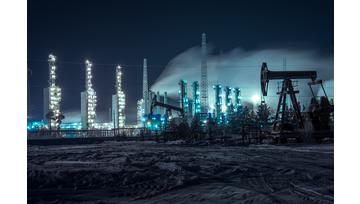 - Dollar strength continues to show, and with a slew of Fed-speakers on tap, there a plethora of potential drivers for markets to grasp on to.

Not more than a month ago, we discussed the OPEC deal that saw an extension of production cuts for another nine months. Normally, a deal that constrains supply should help bring prices higher, but that simply hasn’t happened. As that deal was announced, Oil prices fell; and this led to the ‘Buy the Rumor, Sell the News’ takeaway as investors had bid prices higher leading into the announcement, only to abandon the trade after the news came out.

Since that deal was announced, bids have been fleeting as sellers have remained in control. On the chart below, we look at the rather brisk down-trend that’s developed over the past month in WTI Oil prices.

The past month of falling prices has brought WTI down to an interesting area of support around 42.89; as this is the 76.4% Fibonacci retracement of the 19-year move, taking the low in December of 1998 up to the high of July, 2008. On the chart below, we’re also applying a trend-line that was established from 1998-2001 that still appears to hold relevance today, as this had helped to catch resistance in May before the selling took-over while also capturing the lows of the Financial Collapse in 2009.

On the hourly chart below, we’re zeroing-in on potential areas of resistance to look at down-side continuation. While an example of support such as we have now can often be used for a bullish reversal thesis, the veracity with which Oil prices have been dropping should, at the very least, bring caution to the bullish stance. Instead of using this support area to buy, traders can use this to stem the lows, near-term, in order to find an area of resistance with which stops can be placed on the other side.

Haldane Appears to Contradict Carney: Are We Seeing Dissension at the Bank of England?

Yesterday saw BoE Governor Mark Carney essentially rule out the prospect of near-term rate hikes. And this was like a dousing of cold water on the hopes triggered from last week’s BoE rate decision, when the bank voted 5-3 to hold rates flat with three voters dissenting in favor of rate hikes. In this morning’s speech, Mr. Haldane indicated that he may be ready to vote for a rate hike in the second half of the year, and in response the British Pound is running-higher, giving credence to the idea that what we’re seeing is a short-squeeze.

This isn’t the first time that Mr. Haldane has made the headlines this year. In January, Mr. Haldane, the Chief Economist at the Bank of England, issued a mea culpa around the BoE’s stance around Brexit as the pronounced slow-down that the bank was expecting simply did not materialize. Mr. Haldane had said that the economics profession was in ‘some degree of crisis’ after the 2008 collapse and then Brexit; remarking that the economics profession had their ‘Michael Fish moment’ around these events.

The most interesting line from Mr. Haldane’s January speech was the following quote: ‘I’m not someone who would say that all that’s been done in the past is terrible. It’s just that the models we had were rather narrow and fragile. The problem came when the world was tipped upside down and those models were ill-equipped to making sense of behaviors that were deeply irrational.’

This leads to a series of questions: Does the BoE have new models? Has the bank found a way to adjust their previous models to account for a ‘world tipped upside down’? Or, perhaps, investor behaviors are no longer deeply irrational? Whatever the answer is, the situation around the British Pound, the U.K. and Brexit are all very opaque as Brexit discussions get underway this week. GBP is pushing higher after Mr. Haldane’s comments earlier in the morning have offset the weakness driven by Mr. Carney’s comments yesterday.

The bigger question is whether sellers will use this bump-higher to position into short positions, and on the chart below we’re looking at two potential areas to watch for resistance to develop below the ‘post-Election’ swing-high of 1.2829. Key here is actually waiting for resistance to form if either of these levels comes into play. Given the near-term strength that we’re seeing, a direct fade of this move can be a challenging way to attempt to gain short exposure.

The Dollar ran-up to a fresh monthly high yesterday and from a price action perspective, appears to be building a bullish base as we’ve seen a near-term sequence of higher-highs and higher-lows. The bigger question is whether we’ll see buyers jump-in to offer support at a ‘higher-low’ after this fresh June high printed yesterday, which could further the thesis of bullish continuation in the Greenback.