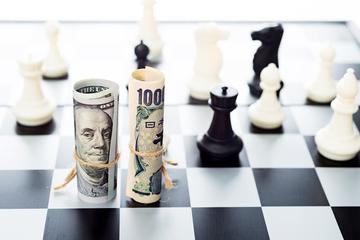 - The Dollar remains relatively strong after last week’s FOMC rate decision, but perhaps more interesting have been recent pushes of weakness in both the British Pound and the Japanese Yen.

- The Euro remains resilient after the ECB rate decision two weeks ago, and this could be usable to traders looking at intermediate-term setups or swing trades, as we outline below.

The U.S. Dollar may be near a turning point. While price action in DXY continues above the 97.50 level that we outlined yesterday, bulls appear unenthused as we’ve seen a lack of follow-thru demand as resistance faces deeper tests. But this strength appears to be asymmetric, as some major pairings are showing more of this recent theme than others. Below, we look at the majors in order to determine which markets may be primed for a continuation of USD-strength, and which may be more interesting for ‘fade’ setups in the Greenback.

I’ll be discussing these setups in-depth in my webinar later this afternoon. Each Tuesday, we host a ‘Trading the Majors’ webinar at DailyFX, and if you’d like to sign up for that, please click on the link below to register.

The Euro has been rather resilient after an ECB rate decision earlier in the month saw the bank take a very dovish stance. This syncs very well with a similar scenario in latter April, after the topside breakout from the first round of French elections. In April, much as we saw in June, Mario Draghi attempted to talk-down the prospect of stimulus exit in an apparent attempt to quell strength in the Euro. And while a bit of weakness did show in April, and again in June after these repeated please, buyers showed-up near support to hold the lows. That support in April led to another top-side breakout as price action jumped out of the bullish channel. Will the post-ECB support iteration after the June meeting lead into the same?

This could be one of the more attractive areas to fade this recent bout of USD-strength. IG Client Sentiment is currently showing a read of -2.05, and this is a bullish factor. 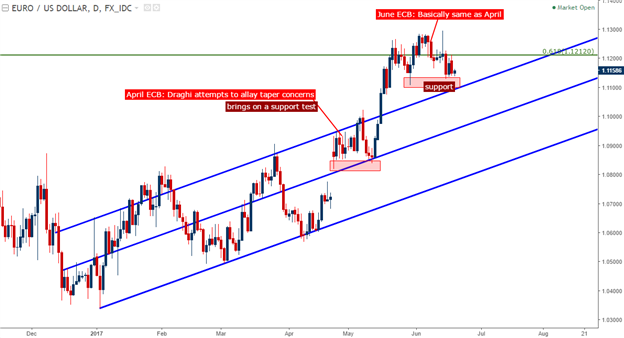 On the 4-hour chart below, we get a bit more in-depth with the move in order to focus on near-term support. Currently we’re seeing a response to near-term support from last week around 1.1140; but a bit deeper we have a couple of additional support swings that can be usable at 1.1107 and 1.1074. 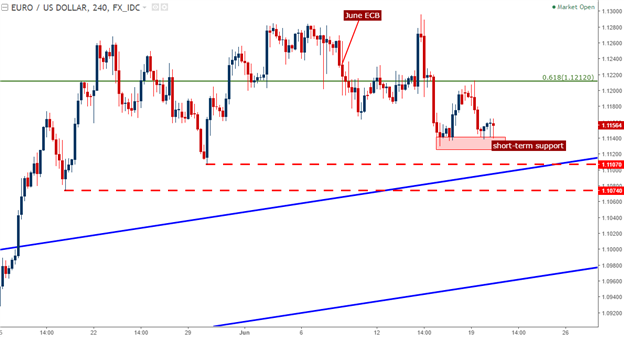 The British Pound, on the other hand, appears to be attractive for a continuation of USD-strength as a variety of bearish factors have recently hit the currency. It appears that we have a mesh of fundamental and technical situation as a variety of negative factors have popped-up for the U.K. economy and traders have correspondingly offered Sterling-lower.

We discussed this theme in-depth in our earlier article, The British Pound Breakdown. The gist of the current scenario is that after a brief respite of strength that started in mid-April, it appears that the bears are back after U.K. elections earlier in the month and a Bank of England rate decision last week. While that rate decision saw three votes for a rate hike, the most since 2011, this is likely a ‘transitory’ theme, as we discussed in this week’s forecast for the British Pound.

Earlier this morning, BoE Governor Mark Carney reiterated his dovish stance, saying now is not the time for a rate hike, and GBP has continued to sell-off in the wake of those comments, leaving Cable in a rather bearish state.

With GBP/USD so near current support, traders will need to do a bit of work to negotiate bearish exposure. We discussed two manners of doing so in this morning’s article, and given the continued persistence of sellers, traders would likely want to wait for some element of resistance to show before taking on bearish exposure. 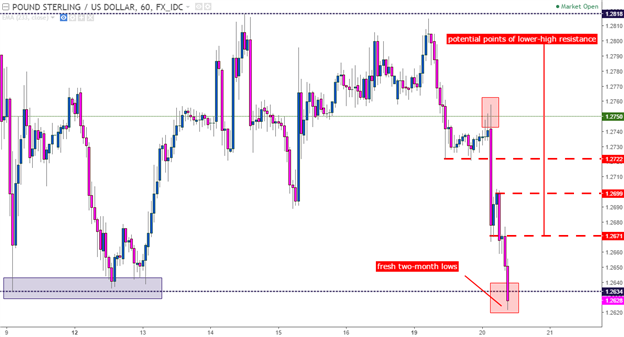 In my opinion, this could be one of the more attractive ways to trade for a continuation of USD-strength. Yen weakness appears to be back as a primary theme after last week’s BoJ meeting. In USD/JPY, we’ve just moved-up to test a huge zone of prior support/resistance that runs from 111.61 up to 112.40. The bottom of this zone had helped to carve the highs in USD/JPY earlier in June, but this morning has seen a test above that level as bulls have remained rather active. On the Daily chart below, we’re dialing in on this zone to denote its relevance to recent USD/JPY price action. 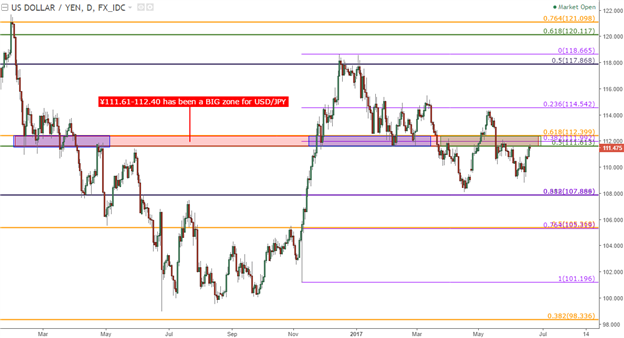 Given that we’ve just revisited what has been a huge zone of prior resistance for USD/JPY, traders can look for a retracement in order to buy a ‘higher-low’ the recent move. On the hourly chart below, we’re dialing in on this recent gust of strength, and we’ve added a series of support points to watch. 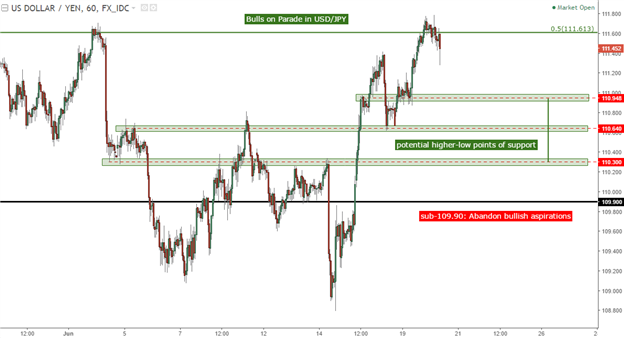 To Use the Above Market Dynamics Whilst Avoiding USD

For those that would rather focus-in on a theme while avoiding a US Dollar that’s going through its own wave of change, traders can steer attention to Euro-cross pairs.

EUR/GBP could be particularly compelling for playing a continuation of GBP-weakness as Brexit discussions have begun this week. The level of .8720 is particularly interesting, as this is a Fibonacci retracement level that was previously resistance, now showing as support. Long EUR/GBP would offer the ability to trade the bullish Euro theme on anticipation of a ‘less loose’ ECB while also focusing on a continuation of GBP-weakness as the country goes into what are expected to be acrimonious negotiations around Brexit. 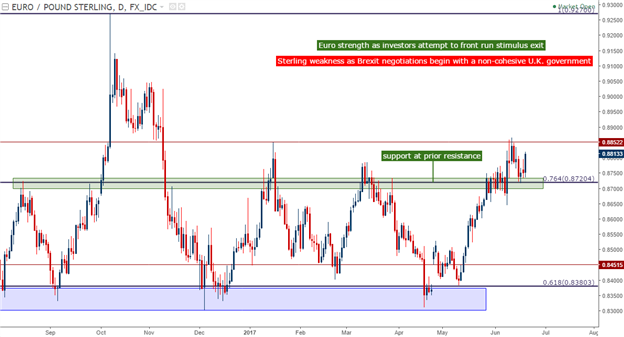 From a similar vein, EUR/JPY could offer an interesting top-side setup as Yen weakness has shown more prominently since last week’s BoJ meeting. Yesterday saw a topside breakout of a bull flag formation that’s been active over the past few weeks. 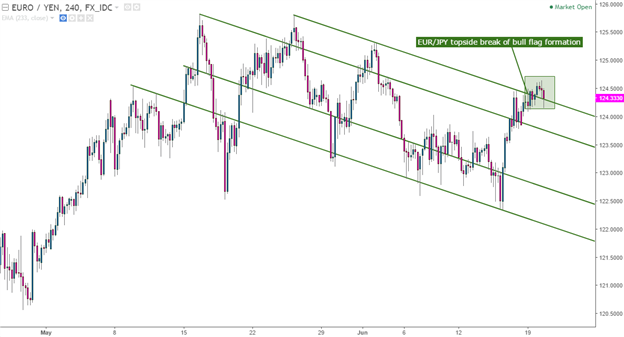 Price action has gotten a bit messy since resistance began to show on the top of that channel, so this setup may require some room to work. On the hourly chart below, we get a bit more in-depth to look at support levels that can be usable for stop placement and topside reentry. 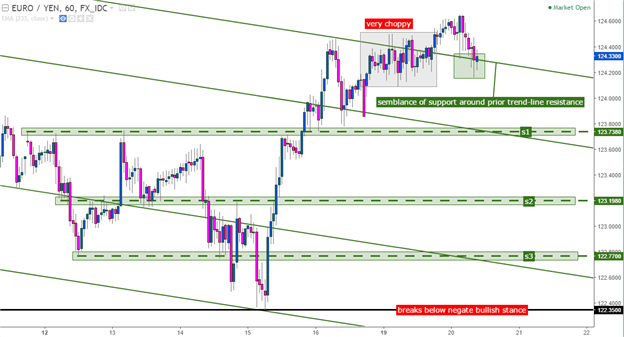