FOMC: With Today's Hike Priced-In, This Meeting is About the Balance Sheet

- Today brings an interest rate decision from the Federal Reserve and a hike is widely-expected.

- The Fed has remained persistently-hawkish throughout 2017, yet the U.S. Dollar and Treasury Yields have been moving-lower with a hastening in the move around March. What changed?

Today at 2PM, the Federal Reserve will conclude their two-day meeting with the announcement of their interest rate decision. It’s widely expected that we’ll see the Fed adjust rates higher today, moving to a target of 1-1.25%; and this has been so expected for so long that we’ll probably see more drama if the bank doesn’t hike. But perhaps more pressing than today’s widely-expected interest rate hike is what the Fed says about their plans for the balance sheet and how many more rate hikes the bank might be looking at before the end of the year.

Coming into 2017, the ‘reflation trade’ was driving through global markets with bond yields moving higher in tandem with stock prices, even as expectations were building for even higher rates; which was, in turn, driving the U.S. Dollar-higher. The prevailing thought after the Presidential Election was that oncoming fiscal stimulus and tax cuts could offset the tighter borrowing conditions posed by a continuation of rate hikes that was afforded by this friendlier operating environment.

But as we turned the page into 2017, matters began to change…

The U.S. Dollar set a fresh 14-year high just two weeks after the Fed’s December rate hike, and has so far spent all of 2017 channeling-lower. The Greenback posed a quick run of strength from early-February leading into the Fed’s March rate decision: But after the bank hiked rates in March, the U.S. Dollar put in another bearish reversal, and has since continued to move-lower. 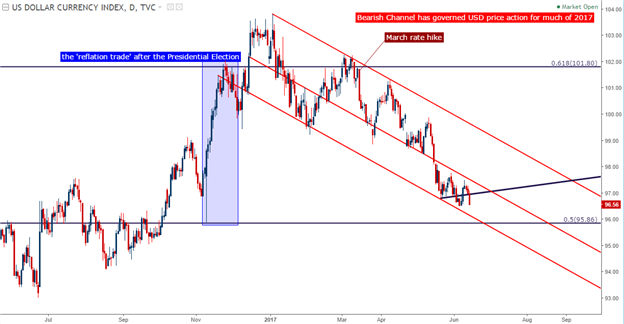 This reversal isn’t relegated solely to currencies: We’ve seen this take place in bonds, as well. On the chart below, we’re looking at the reversal in the 10-year, which hastened around the March rate decision. We’ve also identified the ‘taper tantrum’ of 2013, as this will be relevant later in the article. 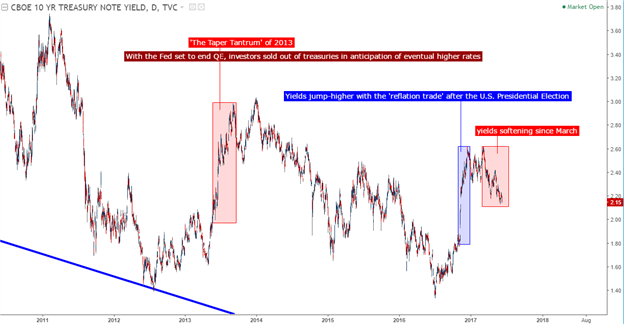 What makes the two above reversals interesting is the fact that the Fed’s stance has been rather consistent throughout this period. The Fed has been persistently hawkish and looking to normalize policy: This has not changed. The only matter that has changed is the apparent opinion of the Fed’s take on the balance sheet, and this theme began to gain prominence around the Fed’s rate hike in March of this year.

This is somewhat of the elephant in the room for the Fed right now because nobody knows really how this will work. There are no historical models from which we can build models nor are there any relevant examples from which we can draw inferences. The Fed traditionally carried smaller sums with operations generally relegated to short-dated securities: But when the Financial Collapse hit, and when interest rates were pegged to the theoretical floor – the Fed needed to find another way to drive liquidity into markets, and buying bonds was a novel way of doing so. Buying bonds, and flushing cash into the financial system was one way that the Fed could continue to push low rates by keeping demand (prices) for bonds high.

The Federal Reserve accumulated $4.5 Trillion worth of bonds after multiple rounds of QE, and at least at this point, have been carrying that portfolio while also starting to ‘normalize’ rate policy. There have been a litany of questions ever since the Fed started buying bonds about what the bank might do when the time came to normalize policy. QE, in essence, flushed capital markets with fresh cash; but what might happen when that cash is removed from the marketplace? While an academic vantage point might proffer that this could lead to higher rates, what we saw in 2013 is that markets aren’t inclined to wait around for higher rates before they look to sell-out of bonds. The simple signaling that higher rates are on the horizon could be enough to create panic.

This concern was so pronounced that in 2013, as the Fed was nearing the end of their QE-cycle, investors started to anticipate tighter policy conditions before the Fed even discussed the prospect of higher rates. Fearing that the Fed would begin hiking and tightening policy as soon as QE concluded caused investors to sell-out of bonds in anticipation of higher yields and lower prices. This has what has come to be known as the ‘taper tantrum’, and this very much is on the minds of Central Bankers around-the-world as banks look to move-away from massive stimulus outlays.

This fear was allayed as the Fed gave multiple assurances that rate hikes were not necessarily right around-the-corner. A year and a half later, the Fed was finally ready for that first rate hike, and in December of 2015, that’s what happened. But just weeks after that rate hike brought a fresh round of risk aversion, and we had to wait another year for the second hike in December of 2016. With the backdrop of the ‘reflation’ trade keeping markets ebullient, the Fed had felt confident enough to begin discussing what their plans are around the balance sheet, and this is the apparent factor of change.

From Mr. Powell’s plan, it would appear that the Fed is going to begin to look at selling bonds after rates have been ‘normalized’, and this definition of ‘normalized’ appears to include one more hike in 2017 after today’s expected move. But perhaps more worrying is the fact that the Fed is going to look to tighten the money supply with constant open market operations rather than by going the traditional route of raising interest rates.

Higher rates are what generally drives capital flows into a currency and an economy; but if the Fed is tightening the money supply by selling bonds and extracting cash rather than by increasing rates – there is a very valid case for continued U.S. Dollar weakness, even as the Fed looks to normalize policy.

Yesterday, we looked at a two-part setup designed to work with USD volatility around today’s interest rate decision. For those looking at USD-weakness scenarios, a long EUR/USD setup could be attractive. If, however, the Fed is able to inspire some element of strength in the Greenback today, long USD/JPY could be an attractive venue as interest rate dynamics reinvigorate the bullish trend in the pair. 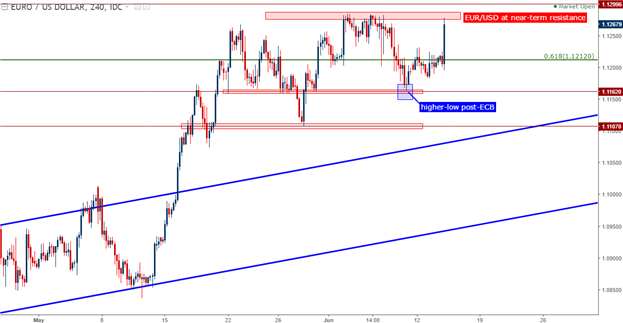