- So far this year has seen continued improvement in economic data around-the-world, even as the Fed has moved further-on with their strategy of rate normalization after years of accommodation.

- Despite the fact that we’re on the heels of what’s expected to be the second rate hike of 2017, or the third rate move in the past seven months – USD price action has been bearish for most of this period. This likely has more to do with what’s going on outside the U.S. than what’s taking place in the U.S.

Tomorrow brings the June rate decision from the Federal Reserve, and markets are widely-expecting another interest rate hike as the Fed further attempts to normalize policy after years of stimulus and accommodation. This would be the second rate hike in 2017 and the third in the past seven months; but perhaps surprisingly, the U.S. Dollar is down quite a bit since that December rate move. USD set a fresh 14-year high just two weeks after that December rate hike, but since that high came-in, the Greenback is down by -6.6% - and this is for an economy that’s continued to show signs of recovery while the representative Central Bank has been openly discussing the prospect of tighter policy and normalization of rates. 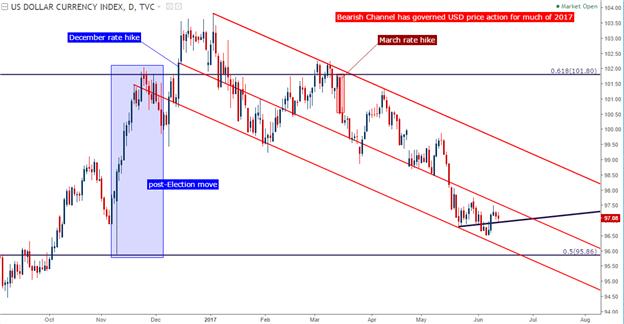 Many have been befuddled by the Dollar’s move in 2017, a year which was very much looking like the harbinger of the ‘reflation trade’. Both stocks and bond yields were moving-higher in the wake of the Presidential election, driven by a number of factors revolving around the prospect of fiscal stimulus and tax cuts combined with the continued rate normalization from the Fed. But as we moved deeper into 2017, global economic dynamics began to change: Signs of recovery began to take further-hold in Europe, leading to the idea that the ECB may be exiting from their own stimulus program sooner rather than later; and in Japan, worries have begun to show that the BoJ may be nearing the end of their own stimulus program. As these fears have populated around foreign-exchange markets, bigger-picture, longer-term themes have seen reversals.

And as strength has started to show after years of weakness in the Euro and the Japanese Yen, investors have sold out of a historically expensive U.S. Dollar in the apparent attempt to get in-front of potential stimulus exits from Europe and Japan. Just last week, we saw ECB President Mario Draghi take what could be considered an extremely-dovish stance when the bank cut inflation forecasts for the next three years despite the fact that inflation has been rising for most of 2017. But even with this dovish outlay from the ECB, the Euro merely moved down to test support; and since that meeting, we’ve seen buyers continue to show-up to cauterize the lows. 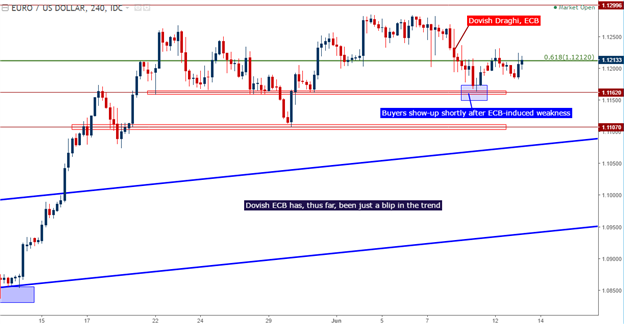 The Bank of Japan Meets on Friday Morning (Thursday Evening in the U.S.)

On the heels of that Fed rate decision we have the Bank of Japan on Thursday evening, or Friday morning in Asia and Europe. As mentioned above, the Japanese Yen has been rather strong for much of 2017, even as the Bank has continued to pledge a passive stance towards continued stimulus, giving the appearance that they’re in no hurry to taper or unwind QE. A comment from BoJ Governor, Haruhiko Kuroda in the middle of May seemed to grab market’s attention as he said that he was ‘quite sure’ that the bank could smoothly withdraw from stimulus when the appropriate time came.

Since then, price action in the Yen hasn’t really been the same. While it appeared as though investors were selling Yen into the early part of May in anticipation of even more dovishness from the BoJ, right around the time that comment came-in to markets, Yen strength started to show as a rather pervasive theme; with USD/JPY falling back into the descending channel that’s been relevant for most of 2017 in the pair.

As we near this next rate decision from the BoJ, USD/JPY is sitting at a key decision point around the 110.00 psychological level, which is just 9.8 pips above the 50% retracement of the ‘post-Election’ move in the pair. 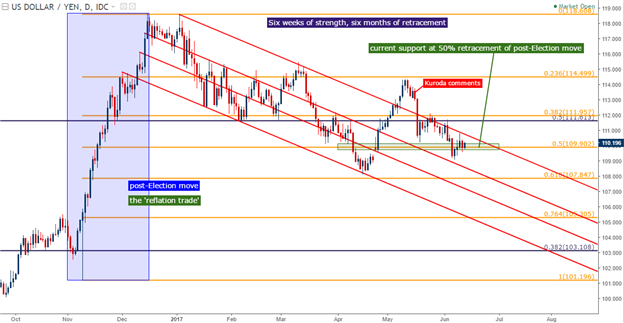 This comment preceded a bearish reversal in USD/JPY with price action moving back into the descending channel formation that’s held most of the pair’s movement this year. As of this morning, we’re seeing support at the 50% retracement of the post-Election move, and this is a big decision level for the pair.

Cable Bounce – But Will the BoE be more-hawkish?

The British Pound is seeing strength thus far on the day, driven by a stronger than expected inflation print. This has been somewhat of the ‘elephant in the room’ for the Bank of England, at least up until recently, as the ‘sharp repricing’ in the value of the British Pound around Brexit had continued to feed into stronger inflationary forces. This led to the idea that the BoE may need to hike rates by the end of the year to temper those higher prices. This idea was soundly rebuked at recent BoE meeting as the bank, led by Mr. Mark Carney, continued to display a dovish, passive stance towards inflation. At the most recent BoE meeting, Mr. Carney said that British inflation may run as high as 3 points by the end of the year. This morning saw May print at an annualized 2.9%, so we’re already pretty close to the high water-mark that the BoE was looking at their Super Thursday batch of announcements in May. This has brought a dash of strength into Cable, after two tests of support at 1.2634 failed to drive-lower.

The bigger question is how last week’s election might impact the BoE’s stance: One of the bigger risks identified by the bank before unloading a bazooka of stimulus in the wake of the referendum last year was the brutal uncertainty that came with the situation. The Bank of England wanted to counter that uncertainty with dovish accommodation. Last week’s election has brought on even more uncertainty around Brexit, so logically this could put the BoE in an even-more passive position; but given this morning’s higher-than-expected inflation, there is a very valid reason for the bank to get a bit more hawkish towards inflation. 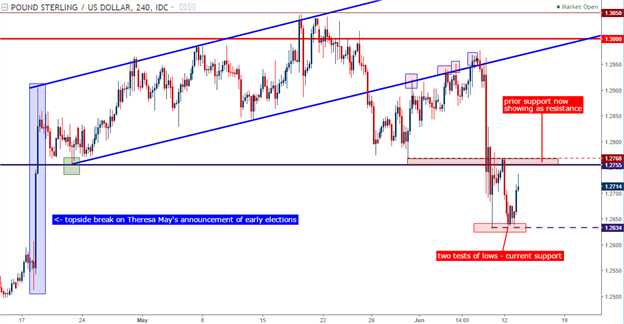