- This week is full of drivers with the expected highlights of Central Bank announcements out of the U.S., the U.K. and Japan. A rate hike is widely expected out of the Federal Reserve, but what might the bank say about the balance sheet along with their rate hike plans for the remainder of the year?

- Equities posed a mid-day sell-off on Friday, led by technology stocks, and that weakness has continued on a global scale to begin this week.

The Federal Reserve is widely expected to raise interest rates at their two-day meeting concluding on Wednesday of this week. This rate hike has been ‘baked in’ for some time now, but as we near the expected move, markets appear to be convulsing a bit, with equity weakness starting to show around mid-day in the U.S. session on Friday.

The big mover on Friday was tech as Nasdaq stocks went through some rather severe selling going into last week’s close. We did see a bit of buyer support off of the lows, but on the open of the new week, that weakness has carried over to Asia and has begun to show in Europe. This move in the Nasdaq 100 comes after a rather strong showing after the Presidential election in the United States last November. After setting an election night low of 4560, the Nasdaq 100 has rallied up to a high point on Friday morning of 5897. That’s a 29.3% return in just a little over seven months as we’ve moved deeper into a rising rate environment. 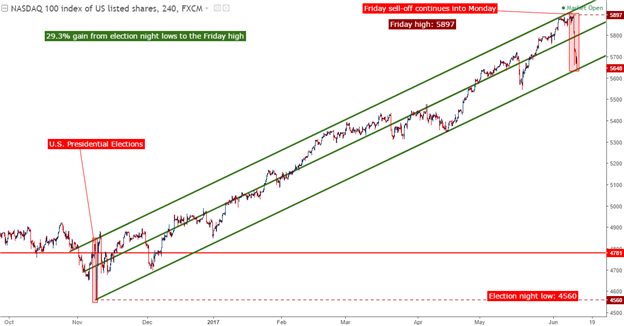 To open this week, we’ve seen that equity weakness expand on a global basis. On the chart below, we’re looking at a recent support break in the Nikkei as the index crossed back-below the vaulted 20k level. 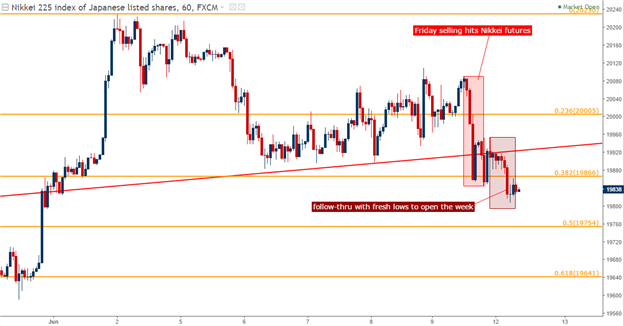 And on the below chart, we’re looking at the move lower in the German DAX; after the index failed again to break through a zone of resistance around 12,850 on Friday. 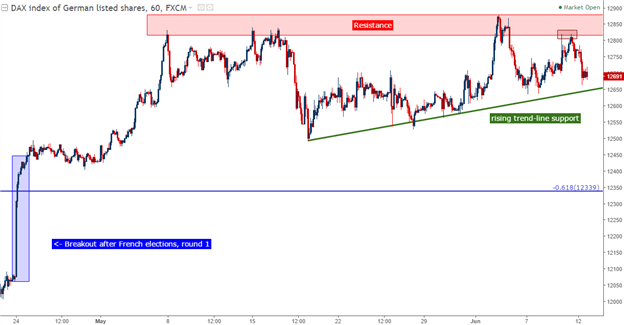 Ahead of U.K. elections last week, we took a ‘big picture’ look at price action in GBP/USD, with specific focus on the psychological level of 1.2750. This zone on the chart had helped to set resistance during the six-month range after the October flash-crash; and after the topside breakout on the heels of PM Theresa May’s announcement of early elections, this zone of prior resistance became support as bulls drove Cable-higher.

But after the shocking results of last week’s vote, Sterling has broken-below support and that previously bullish case doesn’t look all that strong anymore as investors now have to contend with a series of new questions around what was already an uncertain situation (Brexit). On Friday, we looked at this key area of previous support becoming a new area to watch for resistance, and shortly after this week’s open, that’s what happened as sellers re-engaged around 1.2750. 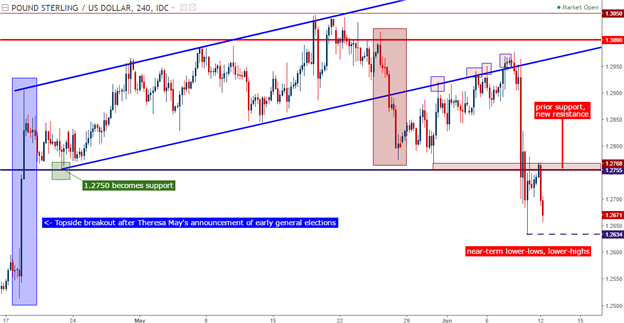 The Bank of England has been rather clear in their dovish stance since even before Brexit. Around the referendum itself, the bank remained extremely dovish after launching a ‘bazooka’ of stimulus; and as recently as last month at the BoE’s ‘Super Thursday’, the MPC retained an extremely cautious approach around future expectations for inflation.

Will this Thursday see another dovish tilt from the BoE as the U.K. economy moves head-first into another batch of uncertainty around Brexit?

Can the BoJ Turn the Tide on Yen Strength?

Japanese Yen weakness was one of the more attractive themes after the Presidential election, and this was likely because the prospect of a continuation of Japanese QE seemed rather certain. After decades of deflation, and after more than $4 Trillion was added to the BoJ’s balance sheet after the initiation of ‘Abe nomics’ in 2012, it wasn’t likely that the BoJ would walk away from stimulus without being rather certain that inflation had started to build.

At the Bank of Japan’s last rate decision in April, we heard move dovish posturing as the BoJ attempted to allay taper/QE unwind concerns. This helped USD/JPY climb above a key zone of resistance that runs from 111.61-112.40, giving the appearance that bulls were back in control of the pair as price action ran-above the descending channel that had showed through the first part of the year.

But around mid-May, BoJ Governor Haruhiko Kuroda offered comments that may have brought a bit of skepticism to the prospect of continued QE out of Japan. Governor Kuroda said that he was ‘quite sure’ that the Bank of Japan could ‘smoothly withdraw’ from its massive stimulus outlay when the appropriate time came. A Central Banker talking about exiting stimulus is obviously a Central Banker that’s thought about it, at least a little, and this was met with a noticeable bout of Yen strength as USD/JPY broke down. 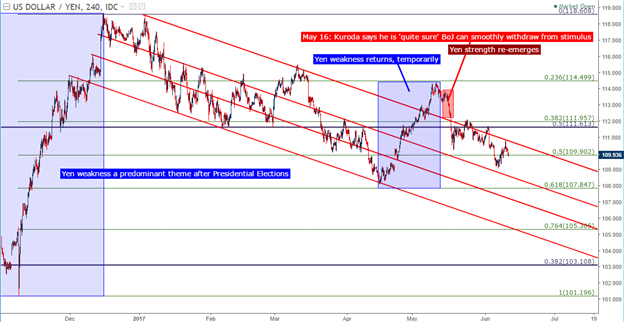 As we walk into the Bank of Japan’s interest rate decision on Thursday, USD/JPY is working with a key area of support around 109.90-110.00. The level at 109.90 is the 50% retracement of the ‘election move’ in the pair, and 110.00 is a major psychological level. If we do see a return of the risk-on trade, this could be an interesting level to watch for a solidification of that theme. If buyers are able to hold support around current levels and above the prior ‘swing-low’ around 109.36, the door can be opened for topside plays heading into this week’s Bank of Japan rate decision. 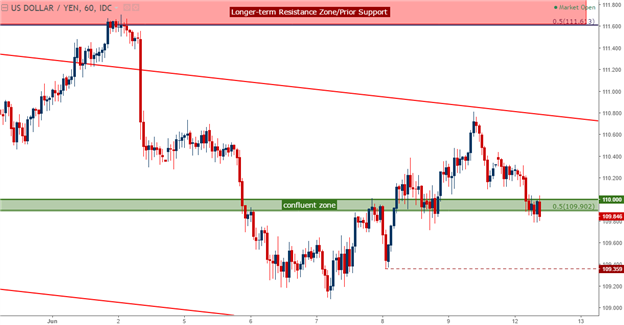