- This morning’s ECB rate decision saw a dovish outlay from the bank, bringing a dose of weakness to the Euro which has, at least at this point, ben met with buyer support in EUR/USD.

- Today is far from over: James Comey testimony begins at 10AM ET, and U.K. voters are going to the polls throughout the day, with exit polls expected to begin coming-in at 10PM BST (5PM ET).

We are almost through the first of today’s three major drivers, with this morning’s European Central Bank rate decision bringing no major surprises. As was widely expected, no rates were moved and ECB President Mario Draghi took a rather dovish stance, showing little motivation to discuss the prospect of stimulus exit. Also, as yesterday’s leak foretold, inflation projections were cut-lower for the next three years with 2017 inflation projections being nudged down to 1.5% from March’s prior number of 1.7%. Inflation projections for 2018 were cut by a fairly large margin, moving down to 1.3% from a prior 1.6%; and even 2019 was moved-lower to 1.6% from a prior 1.7%.

The more dovish aspects of this morning’s meeting came from the Q&A, where Mario Draghi was directly asked if the ECB discussed the prospect of policy normalization to which he replied: ‘No.’ Draghi also went on to say that the ECB could increase the size or duration of QE while also retaining the ability to further cut interest rates. This seems to contradict the statement for the rate decision which had removed the language saying that the ECB could cut rates further.

All in all, this was a fairly dovish outlay for a Central Bank that is seeing improvements in growth, inflation and employment throughout the bloc. As we discussed in the fundamental forecast for the Euro for this week, there is a clear case of divergence taking place within economics in the Eurozone. There is a growing chorus within the bloc that would like to see the ECB move away from easy money policies while growth is showing; but, at least at this point, Mario Draghi and the ECB at-large appears unmoved.

Markets, on the other hand, appear to be positioning for an inevitable exit from stimulus. Despite this morning’s dovish outlay, many Euro pairs simply moved down to support before buyers returned. This is still very early, and matters can still change; but the fact that bulls have been defensive around support even in light of a dovish outlay from the ECB is deductively bullish for longer-term trend continuation. On the hourly chart below, we can see buyers responding to a test of support around the 1.1200 area: 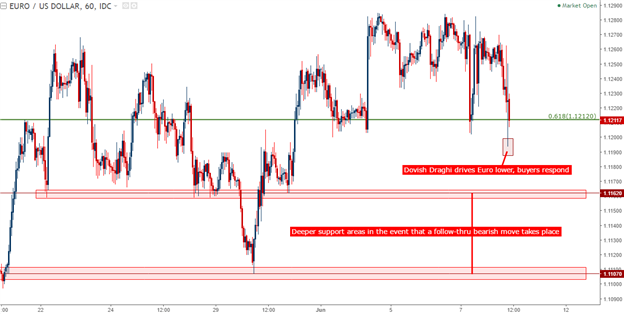 The remainder of today still carries considerable headline risk, as the James Comey testimony is set to begin in Washington at 10AM ET; and throughout the day voters will be heading to the polls in this round of U.K. general elections. Results are expected to begin showing around 10PM BST, after polls close; and this can keep markets rather volatile in the overnight session, particularly if there is a stronger Labour showing than what is being expected. So, considerable drivers remain and the potential for volatility remains high going into tomorrow morning.