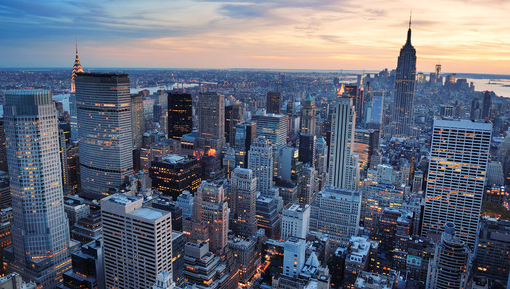 - Safe-haven flows are showing on the morning as markets like Gold and the Japanese Yen are seeing strong moves.

- This is likely driven by investors ‘tightening-up’ risk ahead of a large outlay of risk events on Thursday. We look at each of those events below.

On Thursday of this week, we get a series of highly-watched events, each of which has some element of macro-economic implication. It appears that markets have already begun positioning-in ahead of time as safe-haven markets like the Japanese Yen and Gold have seen rather significant capital flows. Below, we look at each of the three ‘big’ items on the docket for this Thursday.

The European Central Bank hosts a widely-watched rate decision on Thursday morning as the world attempts to get a pulse on just how close the bank might be to walking away from stimulus. Numerous voices in Germany have already opined on the matter, and would like to see stimulus come to an end sooner rather than later. On the other hand, recent comments from ECB President, Mario Draghi, seem to indicate a much more passive approach than what would be wanted in Germany, and this just further highlights the bifurcation taking place with growth in the European economy.

Markets appear to be seemingly attempting to get ahead of any inevitable stimulus-exit announcement, as the Euro has remained well-bid since the last ECB meeting in which Mario Draghi directly said that the bank had not discussed exiting stimulus. This statement helped to bring EUR/USD down to support; but buyers responded rather quickly to hold the lows, and after remaining near support for a week, EUR/USD shot-higher by four big figures. Current price action remains near that area of resistance around 1.1250-1.1265 as we inch closer to the next European Central Bank meeting on Thursday morning. 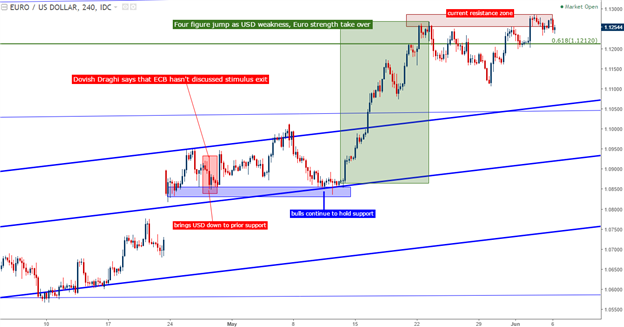 James Comey Testifies in front of the Senate Intelligence Committee: 10:00 AM ET

Later on Thursday, another potentially significant risk event is on the docket for 10:00 AM ET. This is when former FBI director, James Comey, will testify in front of the Senate Intelligence Committee. Given market reactions to some of the events around Mr. Comey of recent, we can surmise that this can carry macro overtones as Mr. Comey’s firing came-in just ahead of another leg of recent USD-weakness. 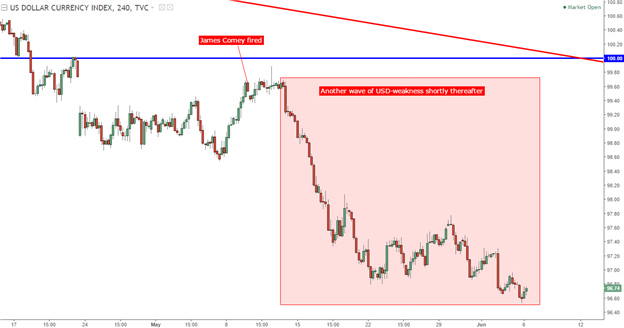 While the connection of an FBI Director to capital market flows might sound like a stretch, the possibility of such issues derailing the fiscal stimulus that markets have been wanting/looking for makes a lot of sense. If President Trump is dealing with administrative issues in the United States, that means that he’s probably not dealing with fiscal stimulus, and that’s a negative for both the U.S. Dollar and U.S. equities, at least with what we’ve seen markets reflect that thus far. No more than a week after Mr. Comey’s firing and we had a fairly aggressive pullback in U.S. Stocks, bringing many to question the sustainability of the now 8-year old bull market.

As indication of the events around Mr. Comey carrying a macro risk bearing, we’re looking at Gold prices below which have hastened their bullish ascent around this morning’s risk aversion. Mr. Comey’s firing coincides with the recent low in Gold prices, around the $1,214-level. Now, with prices almost $80 higher, it looks as though we’re very near a fresh seven-month high as the April swing looks vulnerable.

‘The Comey Low’ in Gold Prices 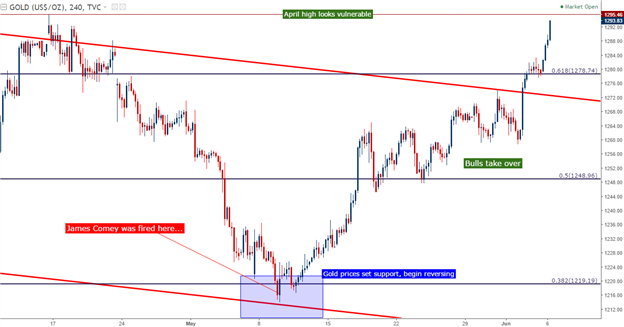 And throughout the day on Thursday, we have U.K. elections, and the potential for volatility in the British Pound here is extremely high. Given some of the reactions in currency markets to recent elections in the U.K., even before Brexit, referring to the 2015 round of general elections, and we can see a market that is on edge as voters go to polls yet again in a decision that has far-ranging implications on both socio-economic and political bases.

The one relationship that has appeared to show here is that a prospects of a stronger Tory majority have brought with it a stronger British Pound. The topside breakout in GBP took place around Theresa May’s announcement of early elections, and this invoked a leap of strength in Sterling that remained supported and well-bid up until last week. But last week brought a Yougov poll that showed waning support for conservatives, bringing to question whether Theresa May’s strategy of early general elections may or may not strengthen her party’s hand at the Brexit negotiation table with the EU: This brought with it GBP-weakness as Cable drove down to test deeper support levels, highlighting the relationship around price action themes in GBP with this upcoming vote. 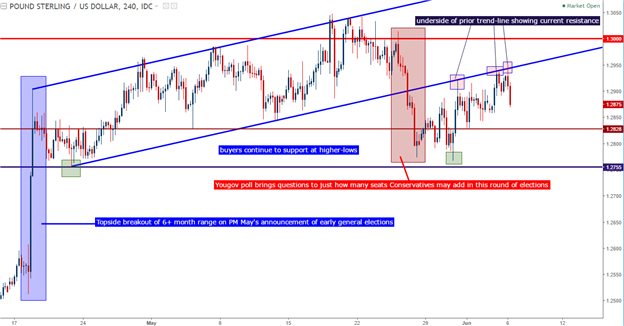 But as we mentioned last week, investors would likely not wait around to try to manage exposure around this outlay of risk: More likely, we’d see markets tightening-up before Thursday arrived, and already on the week, we’ve seen some significant moves of strength in safe-haven markets, indicating that investors are positioning for risk-aversion ahead of Thursday.

In USD/JPY, a major support level was just taken out with a minimum of drama, meaning that buyers were unable to provide much support as price action encountered a significant area on the chart. We’re referring to the ¥110.00 level of psychological support, and this can be an ideal area to watch for ‘lower-high’ resistance for bearish-continuation strategies: 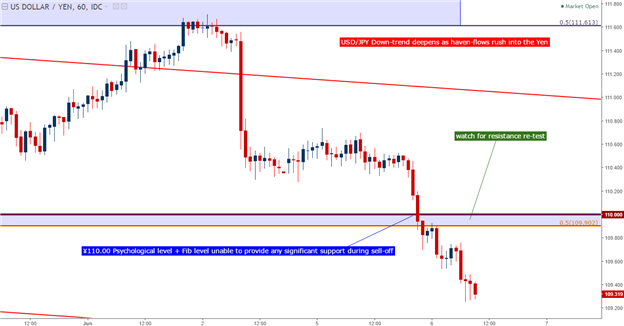