- The next two weeks present a number of market drivers, with this week’s focus likely revolving around the European Central Bank rate decision on Thursday, along with U.K. general elections taking place throughout the day.

- The week after next brings a key Federal Reserve rate decision in which markets are expecting a hike: But the bigger question for USD price action will likely be on what the Fed plans on doing around balance sheet reduction.

The next two weeks are going to bring a series of pertinent drivers to markets carrying both economic and political implications. Thursday of this week, June the 8th, is lining up to be particularly significant as we hear from the European Central Bank at what’s expected to be a widely-watched meeting in the morning. A little later in the morning, former FBI Director James Comey will testify in front of the Senate Intelligence Committee; and throughout the day on Thursday, the U.K. will be going to the polls for this round of general elections, where the world will be watching in order to gauge how Brexit negotiations with the EU might be conducted.

In the week after, we get a Federal Reserve meeting where the large expectation is for another rate hike from the Fed. But despite that seeming acceptance of another move of tightening on rates, the U.S. Dollar continues to fall, extending its 2017 down-trend that started pretty much at the turn of the New Year. And while many are attributing this drop to failures around fiscal policy, this weakness in the Greenback is likely a dream scenario for the Fed as they are given a bit more latitude to tighten policy without the worry of eliciting a trade-imbalance from a stronger currency.

More likely, what we’re seeing isn’t as much a case of the world down-grading the United States as it is the world up-grading Europe and Japan as growth has showed in those areas with more consistency than in prior periods. And while we’re not looking at rate hikes out of either the ECB or the BoJ just yet, it does appear that we’re at a point of growth where each bank would have a difficult time doling out another round of stimulus. Markets are always forward-looking, and this has at least something to do with the weakness in the Dollar this year, even as the Federal Reserve continues to further tighten policy.

This also puts even more pressure on this week’s ECB meeting as Mario Draghi tries to temper a stampede in markets attempting to get in front of any inevitable announcement to taper or unwind QE. Just as we saw in the summer of 2014, after the ECB announced that QE was coming but before they could ever buy a Euro worth of bonds (QE did not actually begin until March 2015), much of the bearish move in EUR/USD took place in the nine months before the ECB could actually begin buying bonds.

Right now, we’re seeing a bit of divergence in Europe as economies in Northern Europe are at a more mature stage of recovery and would like to start looking at exit strategies from QE. Just last week we heard from both Angela Merkel and Bundesbank President, Jans Weidmann, on the matter. Meanwhile, many countries in Southern Europe are at far-less advanced stages of recovery, and they’d likely want to see even more stimulus to ensure that growth remains on track, and this seems to be the central tenet of Mario Draghi’s stance, as he explained in front of Dutch Parliament earlier in May. We looked at this theme as we approach what is expected to be a widely-watched ECB meeting on Thursday in this week’s fundamental forecast for the Euro entitled, Euro Strength Despite Dovish Draghi: ECB Projections to Set the Tone.

The previous ECB meeting in April saw Mario Draghi take a dovish tone when he said that the ECB hadn’t even discussed exit strategies yet. This created a quick move-lower in EUR/USD that was met with support around the 1.0820-1.0850 area. After sitting around this support level for a week, demand took over and drove the pair-higher by four big figures. On the heels of the NFP-miss on Friday, EUR/USD drove up to another fresh six-month high. 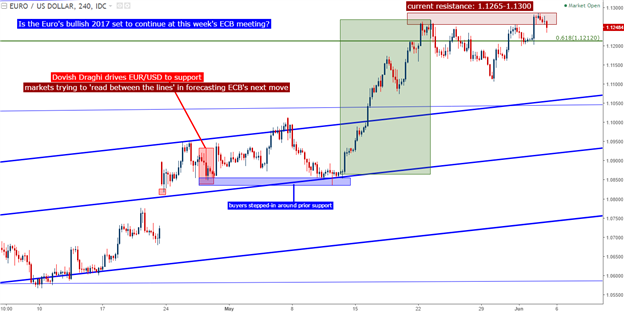 Thursday brings another round of elections out of the U.K., and this is a very delicate situation if trading anything around the British Pound. Given the volatility in recent polling numbers, including last week’s dip in GBP after a yougov poll indicated a waning Tory majority: We could be looking at an extremely volatile situation across markets.

The one relationship that has appeared to show, and which can certainly change around the election results, has been Sterling strength on the basis of a stronger Tory majority while Sterling weakness has shown around the prospects of a diminishing Tory margin.

The bullish breakout in GBP came-in as Theresa May announced the early election gambit in mid-April. In the weeks following, price action in Cable collected and congested as buyers continued to show support above the prior range in the pair, creating a bullish channel after that anchor point of support around 1.2755. But the Yougov poll two weeks ago threw fresh questions into whether or not the Tories would be able to walk away with a Super Majority, or whether they’ll need to form a coalition, which would likely weaken their hand at the Brexit negotiation table. As these results were making their way into markets, we saw a bearish break of that bullish channel, after which buyers stepped-in to offer support above that prior swing-low at 1.2755. 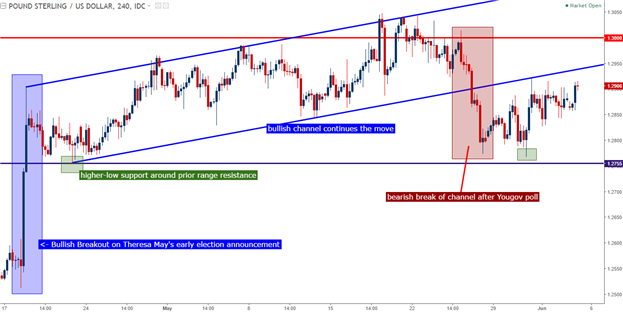 As we walk into this round of general elections, Cable is sitting very near the middle of that post-Breakout range; and based on the results this Thursday, the pair is set to put in a major move in one direction or the other.

FOMC is on June 14th

While there are quite a few other events that can be focused-on for this week, it’s the big even in the week following that will likely drive price action as traders attempt to position-in ahead of time. The Federal Reserve is widely expected to hike rates when they meet for their June rate decision the week after next. Even after Friday’s NFP-miss, odds for a hike at this meeting remained above 90%, and few market participants are harboring the expectation that the Fed may hold here. The bigger question will be the Fed’s take on balance sheet reduction. We saw that the Fed had talked about this at their last meeting when the minutes from that rate decision were released. The Fed had discussed using a consistent methodology to reduce the $4.5 Trillion balance sheet that had been acquired during the multiple rounds of stimulus, and this is de facto tightening without the bank having to hike rates.

But given that its higher rates that elicit capital flows, it would appear that the Fed may have a theoretical ceiling on how high they’re looking to guide rates before looking to tighten the money supply with balance sheet operations. This further exposes the potential for monetary divergence within global currencies; and this is what has likely been the ‘big’ driver of USD-weakness throughout the year. 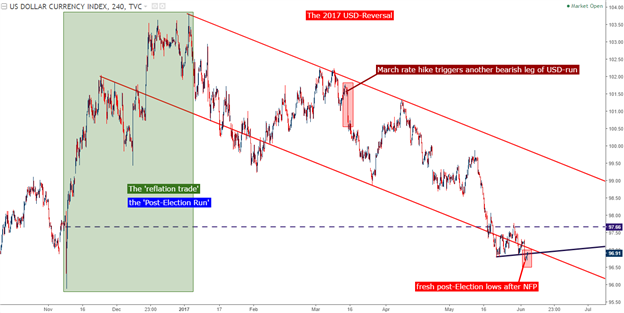