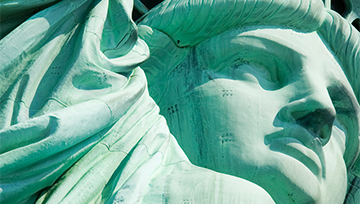 - Tomorrow brings another Non-Farm Payrolls report, and while a rate hike from the Fed in June is fairly baked-in at this point, the bigger question will be the longer-term ramifications on the topics of balance sheet reduction; and how this might impact trading partners in Europe, Japan and China.

- The U.S. Dollar had a very rough month of May, erasing the remainder of the ‘post-Election’ run in the currency. Below, we look at how these moves impacted majors markets in EUR/USD and USD/JPY.

Tomorrow morning brings another Non-Farm Payrolls report, and this will be the last jobs report that the Fed gets to look at before heading into their two-day meeting on June 13th and 14th. A hike is widely-expected at that meeting with odds currently over 90%, and it would likely take a big miss on the headline number tomorrow to elicit concerns that a hike may not take place. The expectation is for 180,000 jobs to have been added to American Non-Farm Payrolls in the month of May; but perhaps more pressing, and likely to be read between the lines, is just how strong the American economy appears to be in order for the Fed to start looking at balance sheet reduction. The prospect of balance sheet reduction was discussed at the most recent Fed meeting in early-May, and this was disclosed in the minutes from that meeting last week.

For its part, the U.S. Dollar had a rough month of May, extending the declines that have enveloped price action in the Greenback in 2017. At current levels, DXY has retraced the entirety of the post-Election spike, and the open price from Election Day (support) is now showing as near-term resistance. 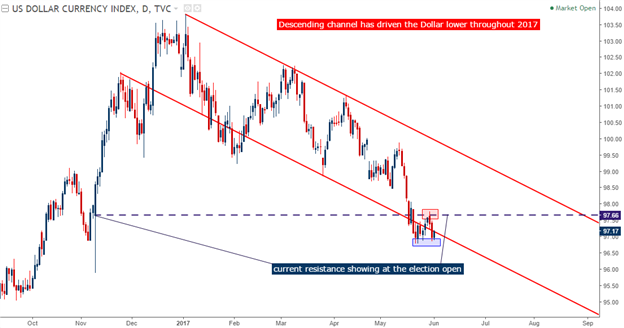 The declines in the Dollar really hastened throughout the month of May, and as you can see in the above image, this eventually led to a down-side break of the bearish channel that had governed a considerable portion of USD price action throughout the year.

But as prices broke down to set fresh six-month lows, buyers showed-up around 96.80-96.90 in DXY. And after multiple iterations of support over the past 1.5 weeks, price action had climbed up to a fresh weekly high earlier this week, until that resistance came-in around the election-open. But on a revisit of support in this range, buyers showed-up a bit earlier than they had previously, giving us a ‘higher-low’ to work with; and this may be indicating a near-term bottom in USD price action. 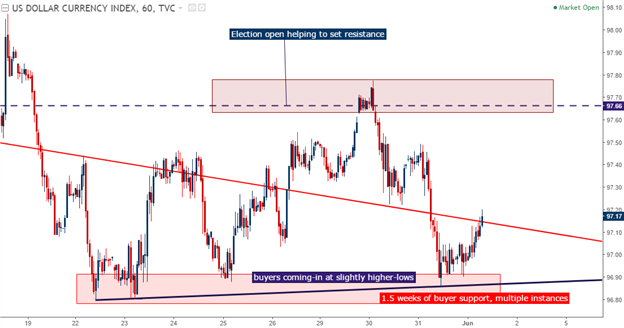 The bullish move in the Euro in May was one of the more noticeable events, as the single currency remained bid throughout most of the month and a significant topside breakout took place in EUR/USD after a support test at 1.0850. This created a bullish breakout of a bullish channel that’s governed much of the pair’s 2017 price action, and at this stage, EUR/USD continues to trade near resistance as we walk into Non-Farm Payrolls tomorrow. 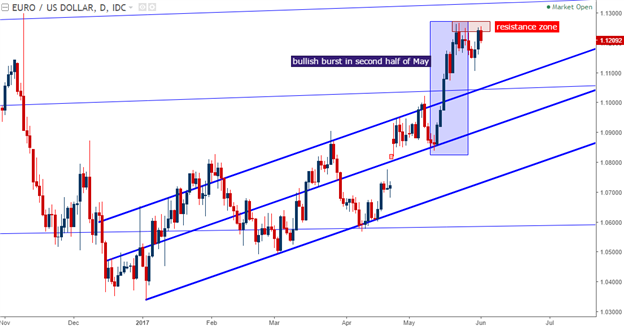 The area of interest in EUR/USD at the moment resides around the 1.1250 psychological level, as we’ve seen multiple instances of resistance play out there over the past week and a half. Last night produced another test of this zone: buyer demand dried up and sellers began to take over as the pair tilted-lower; so we may need a gust of strength tomorrow to finally be able to take out this area that’s produced 1.5 weeks of resistance to a previously strong trend. 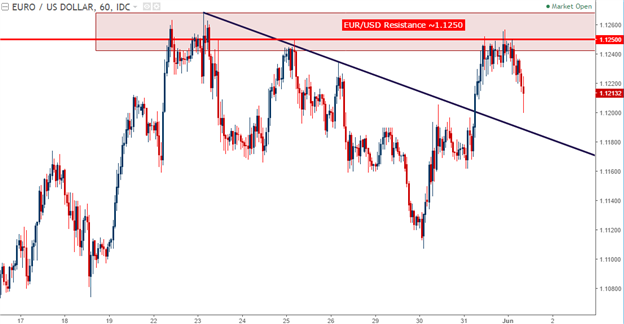 While the Euro rallied up to resistance in May, USD/JPY put in a stutter-step as the first half of the month looked as though the previous bullish trend was heading for another round of strength. But the reversal on May 11th drove the pair lower, and sellers controlled price action for much of the rest of the month. This reversal drove price action through a pivotal zone of support from 111.61-112.40, and after price action peeled underneath this level, sellers used it as resistance. 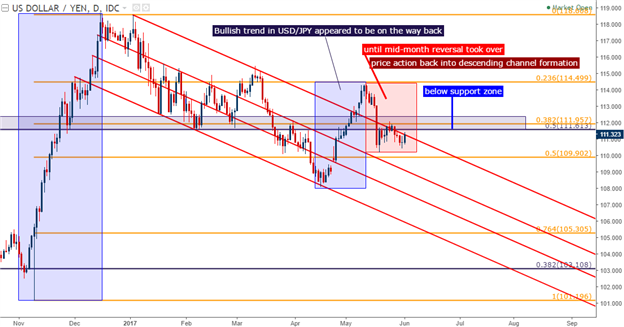 After prices dropped below this confluent support zone, buyers showed-up just a bit above the 110.00 psychological level, and a subsequent re-test of support showed buyers stepping-in at a slightly higher-low, indicating that we may be looking at a near-term bottom in USD/JPY. This area around 110.00 could be especially interesting, as just 10 pips below we have the 50% Fibonacci retracement of the ‘post-Election’ move in the pair. 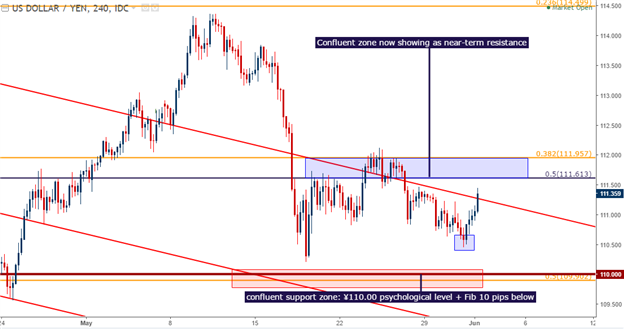 Should price action in USD/JPY break back-in to or through this zone of resistance, the door can be opened to bullish continuation plays that may have a bit of staying power as we near FOMC in mid-June.