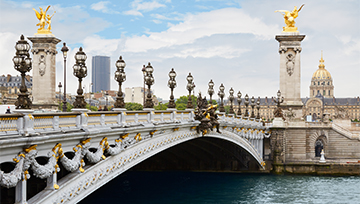 EUR/USD to Resistance, GBP/USD to Support: Drivers on the Horizon

- Next week (June 8th) is going to bring pivotal drivers to the fray in both Europe and the U.K., and we will likely see markets and traders attempting to ‘position-in’ beforehand.

- In Europe, the big question is whether the ECB and Draghi take on a more-hawkish tilt at next week’s meeting, while the questions in the U.K. are political in nature after a recent poll showed a waning Tory majority. Both of these events take place next Thursday, June the 8th.

To close last week, we looked at how this week’s inflation prints out of Europe would be that next piece of information that markets would be looking for in order to gauge just how close the European Central Bank might be to tapering stimulus. And while inflation prints from this morning and yesterday did little to bring fear around the European economy ‘overheating’, they certainly did not derail this recent theme of Euro strength. EUR/USD has broken above a down-ward sloping channel that built-in off of last week’s highs, and current price action in the pair is trading above a key Fibonacci level at 1.1212. 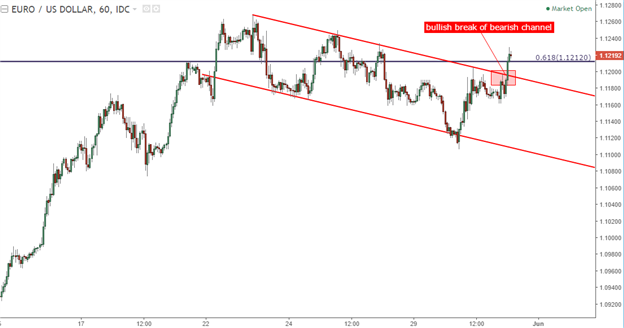 This Fibonacci level at 1.1212 has helped to set resistance, of some kind, in EUR/USD for 15 of the past 27 months. This level is the 61.8% Fibonacci retracement of the ‘lifetime move’ in EUR/USD, taking the low from the year 2000 up to the highs of 2008. There was but one instance over the past 27 months in which price action put in a monthly close beyond this level, in March of last year, after which the month of April found support on this zone before falling back-below in May (right around the time USD-strength came back as a dominant theme).

This can be an idea area to watch support form around today; after which this could become a very interesting area to watch for ‘higher-low’ support in the early portion of June. 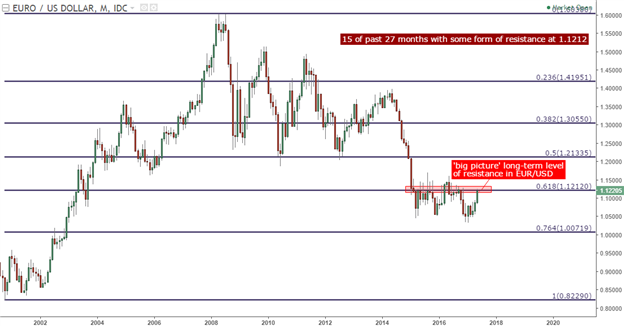 When Theresa May announced early general elections in April, the British Pound caught a major bid as GBP/USD broke out of its months-long range. And in the immediate weeks after, the British Pound was bullish, albeit tenuously, as buyers continued to show support above prior points of range resistance.

But after a fresh set of polls indicated that Theresa May’s conservative party may be losing seats in the upcoming elections, a fresh set of questions enveloped the currency as the potential for even more acrimony during Brexit negotiations has arisen. While the strategy of early general elections was previously thought to have solidified the Tory majority for PM May, it’s now looking like an erosion of majority may be in order; and this can weaken the U.K.’s hand during Brexit discussions, thereby bringing the potential for an even messier split between the EU and the U.K.

General elections are held next week in the U.K., on June the 8th, and we’re likely going be seeing messy price action in GBP-pairs leading into the vote. This morning’s test of prior lows around 1.2775 showed-up around a key area, as this ‘zone’ between 1.2750-1.2775 had helped to set resistance in the pair’s range after the ‘flash crash’ in October; and this zone had also helped to set ‘higher-low’ support after the Theresa-May induced breakout drove Cable to fresh seven-month highs. 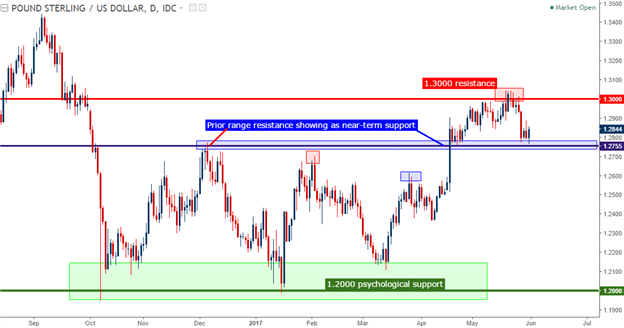 EUR/GBP has been range-bound for much of 2017, and a set of Fibonacci retracement levels taken from the August 2015 low up to the October 2016 high produces a set of workable levels; with the 76.4% retracement helping to set resistance for this year while the 61.8% retracement of that same move has been helping to set support. Should resistance hold below the prior swing-high at .8787, the door could be opened to short-side plays in EUR/GBP, with eyes on next week’s ECB meeting. 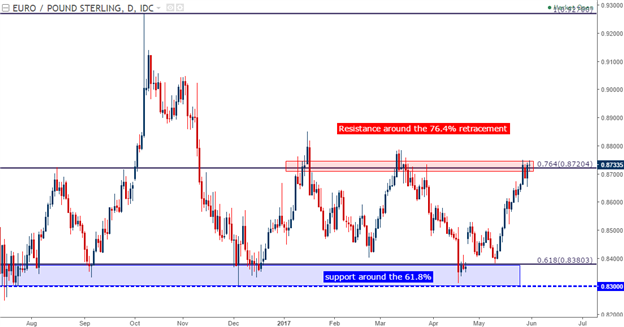