- This is a holiday-weekend for the U.S. with Memorial Day on Monday, and a G7 meeting over the weekend brings the potential for gap risk. Be careful of exposure going into the close today.

- Next week brings another series of relevant data points, and the bullish theme in the Euro will be in the spotlight as Euro-Zone and German inflation data are released in the first half of the week.

This week has brought a series of drivers to markets, and we’re not yet out of the woods as a G7 meeting will carry on through the weekend, and this opens the door to the potential for gap risk on exposure held going into today’s close. As always with such meetings, it’s impossible to tell what economic pain points might be flushed out, if at all, and this can raise the possibility of risk aversion or even another wave of ‘risk on’ around the conclusion of that meeting.

Monday is a holiday in the United States, but on Tuesday morning markets get right back to matters of importance as German CPI is released at 8 AM ET. More pivotal Euro data is released on Wednesday, and Thursday and Friday bring a couple of pieces of key U.S. data when we get ISM Manufacturing numbers and then Non-Farm Payrolls for the month of June.

Below, we look at three of the more interesting price action themes as we go into a key set of data points for next week.

Bullish Theme in Euro Moves into the Spotlight

As mentioned above, Tuesday morning opens with the release of German CPI data, and this has become somewhat of an issue in Europe as German CPI remains elevated with annualized inflation already at the ECB’s 2% target threshold. With inflation at the 2% target, many in Germany are looking forward to the end of QE and this, of course, is helping the bullish theme in the Euro as investors try to get in-front of any inevitable taper.

Wednesday brings more high-impact Euro data, as we get German employment numbers followed by Euro-Zone CPI and, again, each of these can be push points for that bullish theme being seen in the Euro.

Speaking of that bullish theme, we have seen a bit of congestion build after EUR/USD perched up to a new six-month-high at 1.1268. The lower-highs that have come-in after that top was set combined with the horizontal resistance around 1.1169 give us a short-term descending wedge formation in EUR/USD. 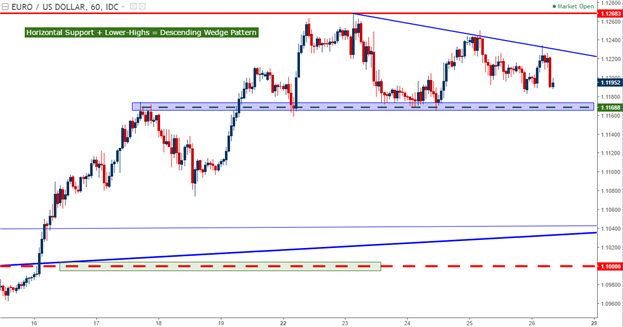 Has the U.S. Dollar Set a Low?

On the polar opposite end of that bullish move in the Euro is the bearish move in the U.S. Dollar. The Greenback has had a difficult time of recent, wrestling with a variety of issues. But as we move into a month in which markets are fully prepared for another interest rate adjustment from the Federal Reserve, we might finally find some motivation for bulls to return. The formation in DXY is still bearish as we remain below pre-election levels, and the descending channel that’s governed a large portion of USD price action in 2017 is still in-tact: 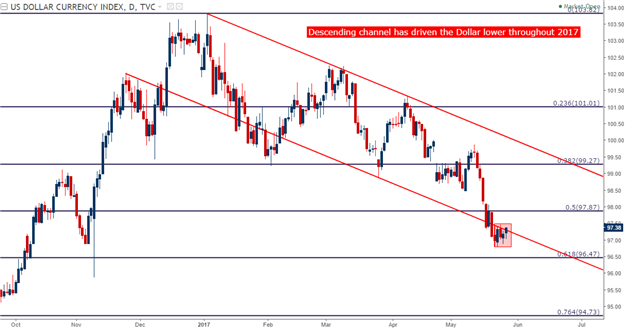 But after another fresh low was set on Monday of this week, traders have continued to come-in to offer support at slightly higher levels – giving the appearance that bears are waning as prices approach prior lows while bulls get a bit more aggressive on taking on exposure at current levels. 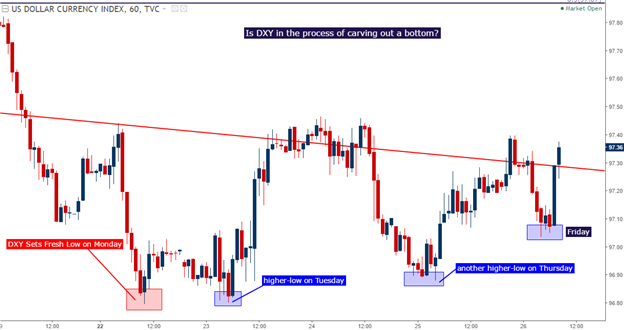 Are Oil Prices Going to Become a Macro Issue Again?

In the first part of 2016, not much was going right for markets. The Fed had just hiked rates for the first time in over nine years, and as markets opened up to the New Year of 2016, troubling declines in Chinese markets had gotten the world’s notice; and global equities took a swan dive for about six weeks until Janet Yellen’s Humphrey Hawkins testimony on February 11th of last year. That helped to mark a bottom in the ‘pain trade’ and for the next few months ‘risk on’ rallied like it was going out of style.

But at the center of this chaos was Oil. Oil prices had put in a troubling decline, dropping by as much as 76% when we hit that February 2016 low. This was driven by a combination of factors, key of which was the supply increases being driven by the ‘shale revolution’ in the United States. As rates stayed lower in the post-Financial Collapse environment while Oil prices stayed high, above $70/barrel, there was a lot of incentive for producers to figure out how to get more Oil out of the ground. But as Oil prices began to turn-lower, moving below break-even levels for many of these producers, some very major problems came to light given that many banks were levered-up on debt to Oil producers. If Oil prices had stayed low, there was a very real risk that many of these producers would face liquidity issues; and given that many major banks were extended to Oil producers, this had the potential to produce a contagion effect. 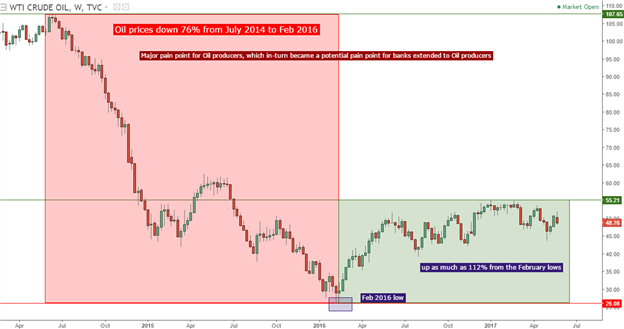 What makes this an issue of importance for next week is the reaction to yesterday’s extension of production cuts from OPEC. After a 9-month extension was announced, as was widely expected, Oil prices put in a bearish move that broke-below a key psychological support level at the $50-handle. After support at $50 gave way, we saw buyers step back-in around $48.25, but given the lower-high with trend-line resistance from yesterday combined with this break of $50 after yesterday’s extension of production cuts, and we’re seeing what could be the initial stages of bearish price action. 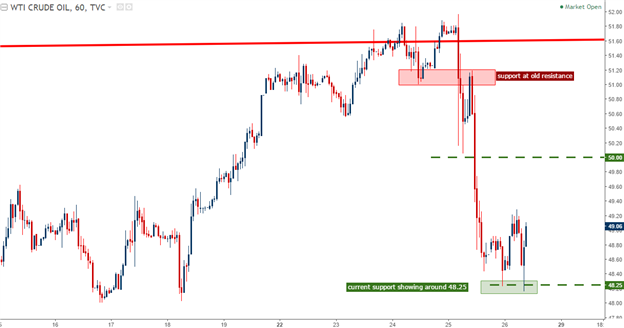 If we do see a continued sell-off in Oil, this could become a pain factor for the global economy that could become problematic. We’re not quite there yet given that we’re still in the initial stages of reaction after yesterday’s announcement, but if Oil prices don’t find support soon, this could become an issue for the continuation of ‘risk on themes’. Below, we look at four support levels of relevance in WTI. 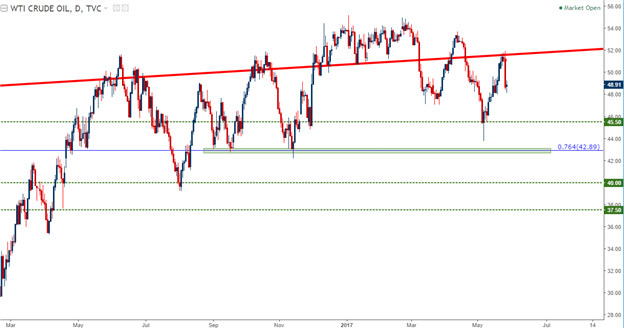