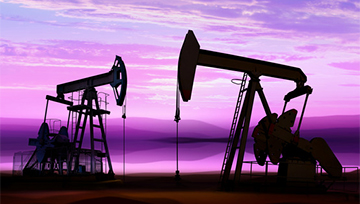 - A 9-month extension of production cuts initially agreed upon in November of 2016 was announced by OPEC this morning.

- Oil prices fell on the news, highlighting that a 9-month extension was already priced-in and the lack of any additional cuts or a longer extension disappointed Oil bulls.

At a widely watched OPEC meeting taking place in Vienna, initial news began to circulate of a 9-month extension of production cuts. These production cuts were previously agreed upon last year and helped to buoy the price of Oil after the massive declines in the second half of 2015 led into a troubling start to 2016. But after Oil prices bottomed around the $26-handle, rumors of OPEC action began to drive the bid and, eventually we had the announcement of the agreement between OPEC and non-OPEC Oil producers that was devised to help stem supply in order to drive prices higher. And it worked, sort of, considering that the bulk of the bullish move had already come-in well-ahead of that initial announcement last year.

But as the end date for those production cuts was set for the end of June, questions began to arise as to what might happen to Oil supplies and, in-turn, prices once the current deal expires. At this week’s OPEC meeting in Vienna, many expected some type of extension to be reached and the 9-month time frame was already well known, as Saudi Oil Minister Khalid Al-Falih openly discussed the prospect of a ‘9-month straight’ extension. When an OPEC delegate announced this morning that this was probably what was going to happen, Oil prices fell; giving a fairly clear example of ‘buy the rumor, sell the news’. 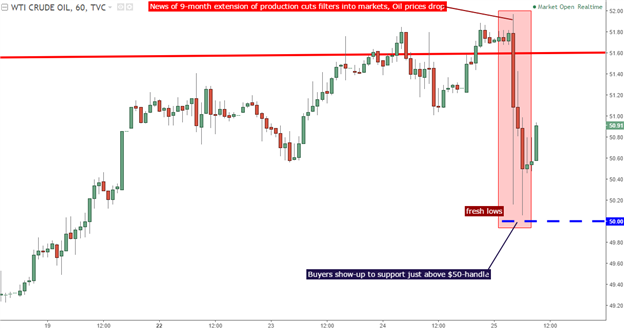 The bigger question at this point is whether an extension of the current production cuts will actually serve to keep Oil prices elevated. With crude trading at or around $50/barrel, shale production in the United States may continue to grow as producers are incentivized to continue operations while extraction is above break-even levels. And then another big question is the long-term price scope of Oil prices: While last year’s 100% rip off of the lows looks really attractive, the previous move of -76%, comprising a total loss of -$81.57. 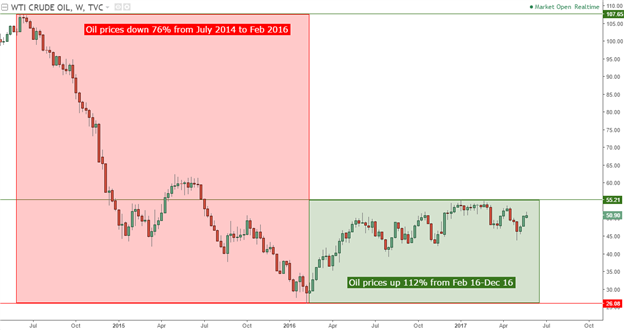 The argument can be made that this dramatic drop in Oil prices was largely driven by the additional supplies of U.S. shale and the expectation for continued growth in similar styles of production. The more shale production, the less R&D costs that need to be re-cooped, and the cheaper it becomes for shale extraction; and this is a potential game-changer for energy production that’s largely been reliant on OPEC.

A longer-term examination of Oil prices shows that the improvement in Oil prices seen last year is rather minimal in the bigger picture. From the below chart, we can also see an interesting trend-line that’s been tested for the better part of the last two years, with this trend-line projection offering numerous instances of intra-day support and resistance. 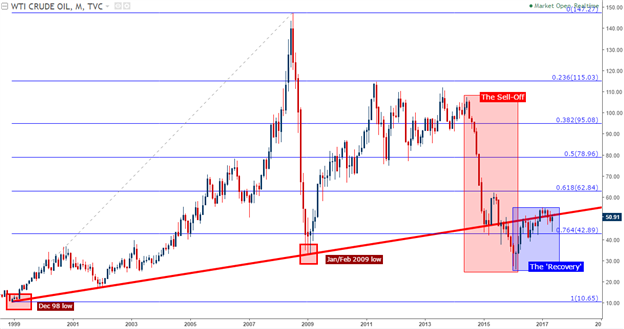 On the daily chart below, we’re looking at how price action over the past three days has found resistance at this trend-line projection, leading into this morning’s sell-off after news of an extension of production cuts made its way through markets. 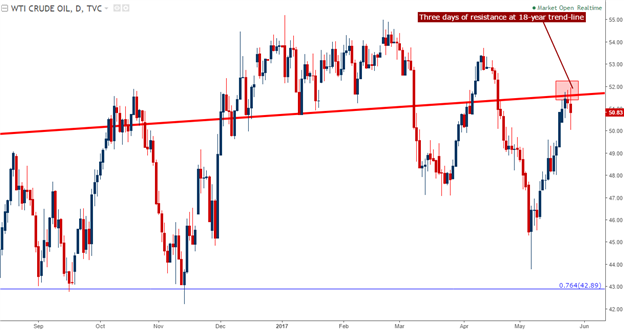