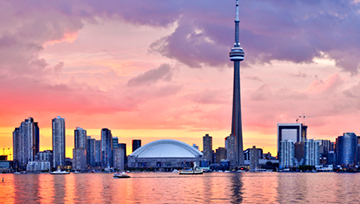 - The next two days will offer a series of interesting market drivers as we hear from Haruhiko Kuroda of the BoJ and Mario Draghi of the ECB, while also getting the May rate decision from the Bank of Canada and the release of minutes from the Federal Reserve’s meeting earlier in the month.

- Major markets in EUR/USD, USD/JPY and USD/CAD have been putting in interesting moves of late, and below we put those moves/setups in scope with the context of tomorrow’s calendar.

The remainder of today is relatively light on the data front for the U.S. session; but starting tonight, we hear, in some shape or fashion, from four major Central Banks. And given the context of what’s been going on with each of the four currencies represented by these Central Banks, any comments or innuendo can serve to hasten volatility in each market, helping to extend or reverse trends that have begun to show with a bit more prominence over the past few weeks. Below, we look into each situation.

The Japanese Yen put in a key reversal last week after some comments from BoJ Governor Haruhiko Kuroda caught many by surprise. Leading into those comments, the Yen had been extremely weak as the Bank of Japan had shown no motivation to look beyond their outsized stimulus program, giving the appearance that the BoJ would be comfortably sitting on this monetary accommodation for the immediate future. With inflation continuing to lag, there’s little reason to worry about the economy ‘over-heating’, and given the BoJ’s plight with trying to stoke inflationary pressures seemingly falling flat at every turn, it made sense to expect the Bank of Japan to be one of the looser Central Banks amongst developed economies.

And then last week, Governor Kuruda mentioned that he was ‘quite sure’ that the Bank of Japan could taper and eventually exit their stimulus program with a minimum of market drama, whenever the appropriate time came. He accompanied that statement with a pledge that the BoJ always has the room to expand monetary stimulus in order to hit the bank’s goal of 2% inflation; but markets seemingly only heard the first part of that statement as it was inferred to mean that Kuroda and the BoJ are already at least thinking about life after monetary stimulus.

In short order the Yen strengthened and broke back-above multiple resistance levels; and this has left prior up-trends in USD/JPY, GBP/JPY and EUR/JPY in a rather beleaguered state. 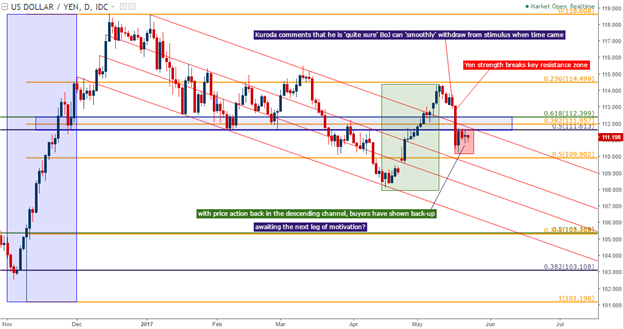 Will Governor Kuroda use tonight’s speech to help push the Yen back down? We’ve already seen some element of support developing in USD/JPY after last week’s fall below the key support zone from 111.61-112.40. Buyers showed-up just above the 110.00 psychological level in USD/JPY, but strength was unable to drive price action back into that key zone of prior support. 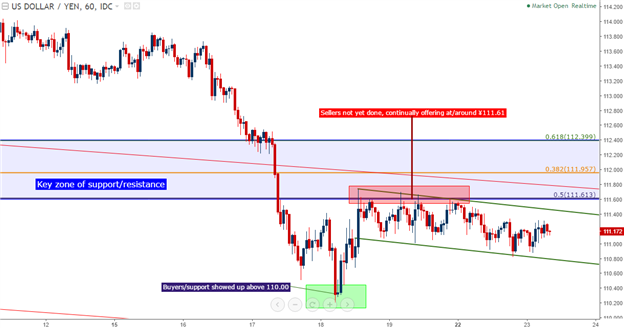 Dealing with a slightly more-developed form of the same issue that Governor Kuroda will be contending with is Mr. Draghi and the Euro. Mr. Draghi has been quite clear on numerous occasions that the European Central Bank is not yet talking, discussing, or even thinking about the prospect of exiting from their QE program. He even said as much as the most recent ECB rate decision, but this did little to quell market demand for the Euro in anticipation of an eventual QE-taper.

Not all parties or economic interests in Europe are happy with continued QE. As inflation continues to rise in portions of the bloc, other areas continue to lag in key areas like employment and wage growth. The entire continent of Europe does not appear to be on an even-keel of similar risks, and this is really beginning to show in expectations around monetary policy from the ECB.

At that previous ECB meeting on April 27th, Mr. Draghi did his best to temper Euro-strength by commenting that the bank hasn’t even discussed the prospect of exit strategies (from QE), and this should’ve helped to stop or at least slow that trends of Euro-strength. And it did, for about a day; but buyers showed back up at a key support level, and after EUR/USD held support for two weeks, buyers returned with gusto to bid Euro higher by four big figures in less than a couple of weeks. 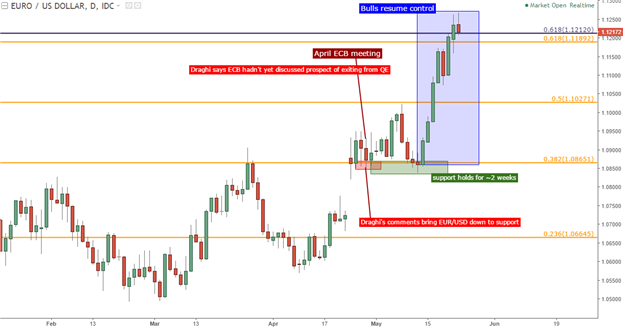 The recent onslaught of strength in EUR/USD has broken the pair above a key level at 1.1212. This is the 61.8% Fibonacci retracement of the ‘lifetime move’ in the EUR/USD pair, taking the low from the year 2000 up to the high in 2008. But perhaps more importantly, this has become a key support and resistance level ever since the pair fell-below 1.1500 in anticipation of ECB QE back in 2014. 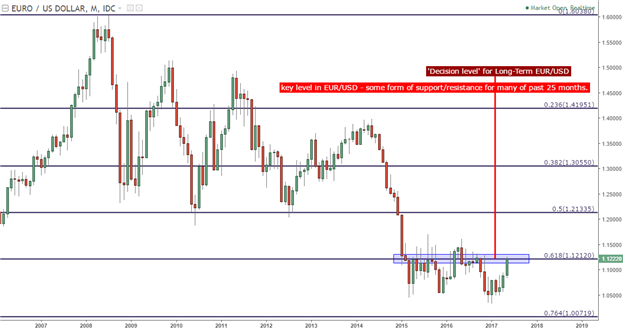 The Canadian economy has shown marked improvements since last year’s recovery in Oil prices; and to date, many metrics indicate an even more robust ‘recovery’ taking place in Canada as opposed to what’s being seen in the United States, where rates have already begun to rise.

But despite this improvement in the underlying data, the Bank of Canada has been notably dovish; with the BoC continually highlighting the risks or downsides within the Canadian economy even as data has been ticking-higher. This has helped to contribute to some brisk increases in real estate prices in urban areas like Toronto and Vancouver, and that has helped to stoke fears of ‘frothiness’ in home prices in these areas. Two weeks ago, Moody’s Investor Services downgraded six of the largest Canadian banks, largely driven by fears around this theme.

So, higher rates could probably help to stem some of those gains in real estate prices; but this would come at the danger of choking-off a young recovery that, frankly, is very connected to the price of Oil (which, itself, will come to issue around the OPEC’s meeting on Thursday). So, we probably aren’t going to hear or see the Bank of Canada do much here, but as we’ve seen from the above two scenarios, it takes just one off-beat comment to stoke market moods and behaviors. 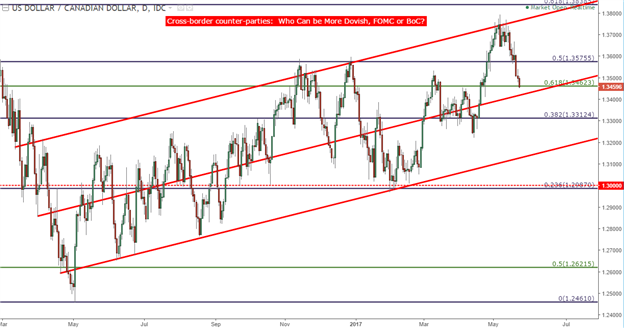 The U.S. Dollar has been a mess of recent, and this weakness in the Greenback is what has likely heightened the stakes in each of the above three scenarios as Dollar-weakness has meant Euro, Yen and CAD strength. The Federal Reserve is one of the few Central Banks from a developed economy actually looking to hike rates, but for the past five-and-a-half months, the Greenback just cannot catch a bid. As a matter of fact, it’s the backdrop around the Fed’s two prior rate hikes that have helped to set the bearish state in the U.S. Dollar; first with December’s hike helping to set the top in DXY around 103; and then with March’s rate hike triggering another wave of selling. 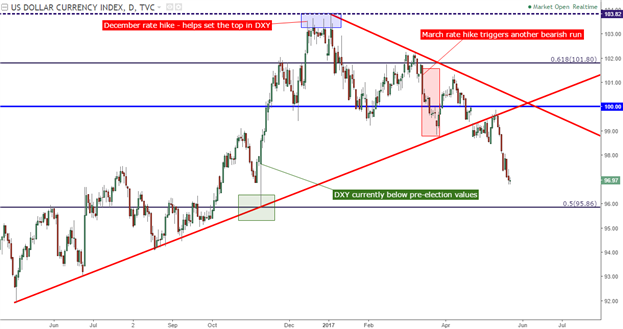 At that most recent Fed meeting earlier in May, the bank held a rather hawkish tone, remarking that they felt that a recent spate of weakness in data was ‘transitory’, which was largely inferred to mean that the bank was still on pace to continue with their plans of hiking rates a full three times in the calendar year of 2017. Markets are seemingly not buying this idea, as probabilities for a rate hike in June have continued to fall since that last meeting.

If the release of minutes from that Fed meeting indicate that the bank may be close or feel close to hiking rates, we may see some element of support show in the Greenback as market participants factor-in a higher probability of a rate move at the Fed’s next meeting on June 14th.