- Last week was relatively quiet on the data front while price action in many major markets put in key moves.

- This week sees a noticeable pickup in drivers as we hear from a litany of Central Bankers, FOMC Meeting Minutes are set to be released on Wednesday, a pivotal OPEC meeting is on Thursday, and the G7 meeting kicks off on Friday in Taormina, Italy.

Last week was relatively quiet on the data front. But price action, however, was not so quiet, as we saw some rather pivotal events take place in some very key markets. U.S. Stocks sold off on Tuesday, recovering a portion of their losses in the remainder of the week: Euro-strength has become rather pervasive, and last week also brought a quick burst of strength in the Japanese Yen that drove through multiple resistance levels.

This week brings on a plethora of drivers, many of which are subjective to some degree, and is capped off by the G7 meeting in Taormina, Italy on Friday, leading into the weekend. On Wednesday, we hear from the heads of the Bank of Japan and European Central Bank when Messrs. Kuroda and Draghi speak in Tokyo and Madrid, respectively. Later on Wednesday, we get a Bank of Canada rate decision, and after that we get meeting minutes from the most recent FOMC meeting held earlier in May. Thursday sees a key OPEC meeting in Vienna, followed by the release of UK GDP and U.S. Advanced Retail Sales for the month of April; and Friday closes with the start of that G7 meeting along with U.S. GDP and Durable Goods Orders.

This collection of drivers can serve to extend or reverse last week’s quick spike in volatility, particularly in the U.S Dollar. Below, we look at three of the more interesting price action events across global markets in order to ‘hone in’ on what might be the more key areas to be focusing on.

Of recent, we’ve seen a concerted effort from the European Central Bank to allay concerns of QE-taper. We heard Mario Draghi speak to this at the most recent ECB meeting, remarking that the bank hadn’t yet begun discussions around exit strategies; but judging by price action, markets aren’t necessarily buying that idea, as Mr. Draghi’s dovish assurances merely brought on a quick support test, and this was followed by three weeks of strength as EUR/USD has run from a post-ECB low of 1.0839 up to a fresh six-month high of 1.1246. 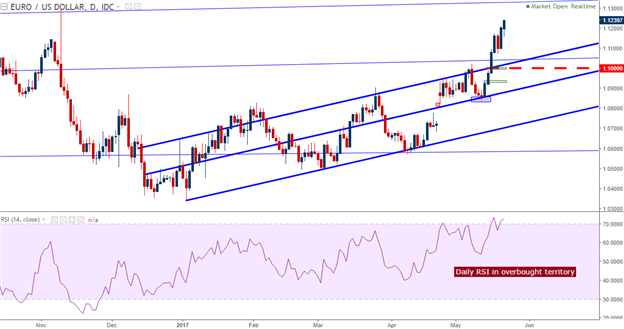 USD/JPY is Back in the Bearish Channel

The latter portion of April and the early portion of May saw the return of the USD/JPY bullish theme, as the pair broke out of the downward sloping channel that had governed price action since the open of the New Year. But the reversal on Tuesday and Wednesday broke below a key zone of support comprising the area from 111.61-112.40; and now we can see this ‘zone’ acting as near-term support by capping the highs over the past three trading days. 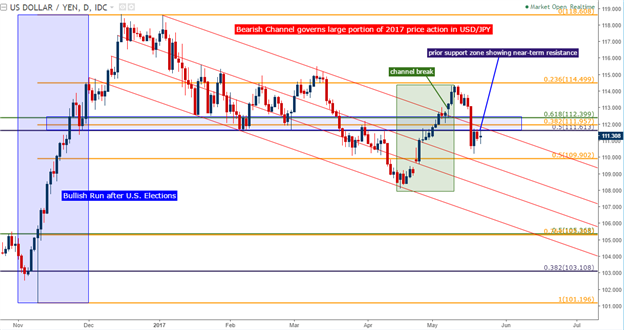 On the hourly chart of USD/JPY below, we can see how the bottom of this zone has continually been used to proffer near-term resistance. The swing-highs that have come-in off of that resistance level can be coupled with the short-term term ‘higher-lows’ that have shown up to give us a near-term symmetrical wedge pattern. 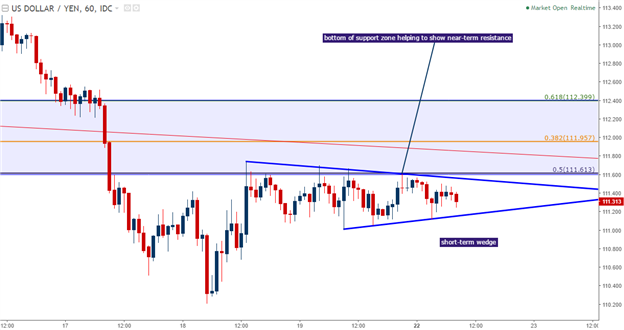 Another big level that came into play last week was 1.3000 in GBP/USD, which hadn’t been seen in the pair since the ‘flash crash’ in October of last year. This was another area that a dovish Central Bank was unable to ‘talk down’ a currency, after the Bank of England’s Super Thursday even earlier in May saw the Bank of England take on a familiarly passive tone. But, despite the passive tone, weakness in the currency was short-lived as buyers showed up around near-term support and, eventually, drove the pair above the vaulted psychological level at 1.3000. 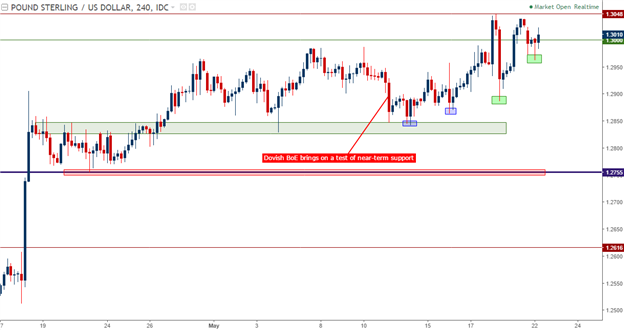