Are We on the Verge of Major Market Upheaval?

- While VIX is rising, many are calling for ‘big picture’ corrections; but evidence doesn’t yet suggest that this is anything more than ‘buy the dip’.

- While the pullback in the S&P has been relatively minor thus far, the sell-off in DXY has many worried. But is this a proper gauge for the U.S. Dollar given its extreme Euro-exposure? With the recent top-side move in the Euro as markets attempt to get in front of QE-taper, this additional Euro-strength (and DXY weakness) makes sense; but does this portend something larger ahead?

This may sound like an ironic title given the fact that the S&P re-tested its all-time-high just yesterday, but in the current environment of acrimony playing out in the political landscape across the United States, this is the type of context that we as traders get to deal with. The ‘Trump Trade’ took on a life of its own after the U.S. Presidential election, and as we remarked at the time, that exuberance likely let market participants get ahead of themselves as they factored in fiscal stimulus and tax cuts combined with an accommodating monetary backdrop. But four-and-a-half months after the turn of the New Year, we have no tax cuts, or even the prospect of such, as political in-fighting continues to dominate the headlines.

Already many are calling for a full-on reversal of the ‘risk on’ mood that dominated global markets in the wake of the Presidential election. And while this is certainly a possibility, with political bickering leading to an onslaught of selling in US assets; more likely we’re looking at a pullback. The elephant in the room is the Federal Reserve, and they do not have to hike or tighten policy in the immediate-term. Markets have already begun to whittle down expectations for near-term hikes from the Fed, with markets now expecting only one more hike this year (in June), while odds for a second hike in December have dropped below 50%.

On the chart below, we’re looking at the S&P 500 under some pressure so far on the morning: 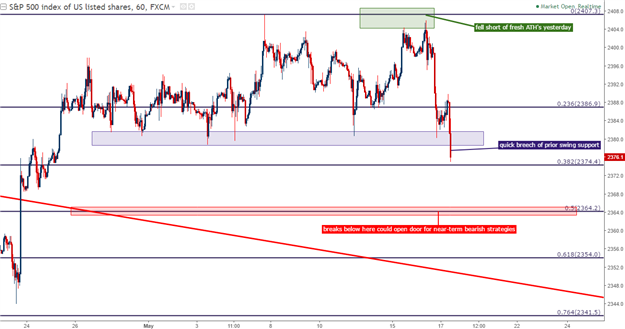 The troubling chart around U.S. markets at the moment is the U.S. Dollar; but even this has some element of opaqueness, as the common instrument to evaluate the U.S. Dollar, DXY, is heavily-allocated with Euro-currencies. So, DXY is more of an ‘inverse Euro’ than a true representation of the U.S. Dollar, as DXY has minimal allocations of exposure to Asia; which is a pretty large, and pertinent section of the global economy, particularly with the rise of China. First, we’re going to look at the ‘Euro-heavy’ Dollar component, and below that we’ll look at another instrument to get a slightly different look at matters. 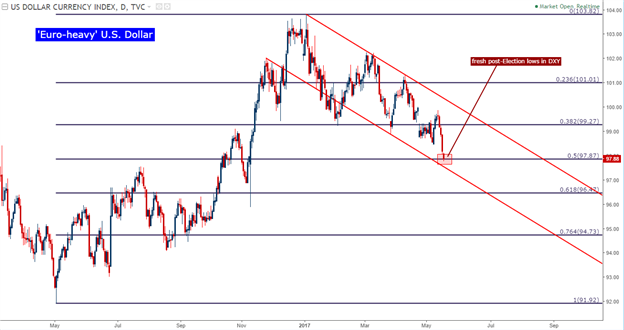 On the below chart, we’re looking at the ‘Dow Jones Dollar Index’, which has exposure to EUR/USD, GBP/USD, AUD/USD and USD/JPY (25% split on snapshot date of 1/1/2010), and we’ve added a Fibonacci retracement around the same move as above, taking the May 2016 low up to the January 3rd swing-high. 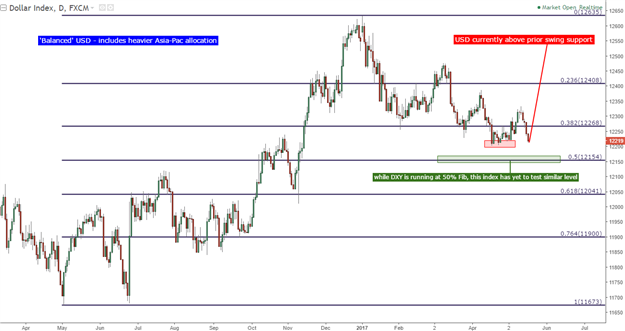 For those looking at areas to play reaction, we may have something brewing in USD/JPY as weakness in the Greenback has finally begun to show up against JPY, and this has brought price action down to a key zone of support. This zone of support runs from 111.61 up to 112.40, and price action is currently testing the bottom of this area.

Traders can look for support to develop above the prior swing-low at 110.84, and if this does take place, then bullish resumption plays could be in order. If no support, no trade. 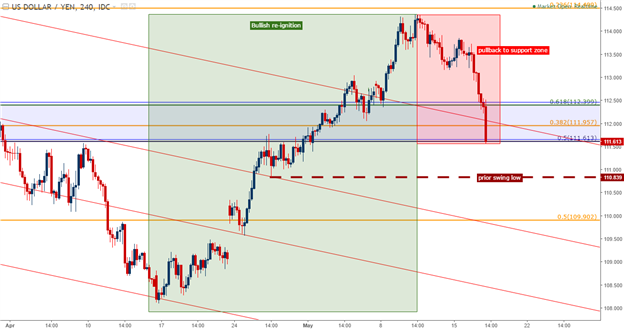