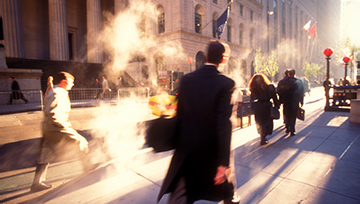 EUR/USD, GBP/USD at Support While USD/JPY Pulls Back

- Next week presents a relatively light data calendar, and this can be an opportune time for price action to show which trends may have continuation potential or which themes may remain active in the coming weeks.

- Below, we look at current support showing in EUR/USD and GBP/USD; and we look at a series of levels in USD/JPY that can be utilized for the goal of bullish trend continuation.

The past few weeks have brought a considerable number of drivers to the fray for Forex markets. One of the unifying themes from this recent risk outlay has been the fact that few Central Banks want to see strength in their currency. The European Central Bank has tried to talk down the prospect of QE-taper, as has the Bank of Japan; and yesterday we saw a very dovish Bank of England attempt to do the same. Meanwhile, the Federal Reserve remains persistently hawkish, but markets seem to not care or be moved by the prospect of faster rate hikes in the remainder of this year as the U.S. Dollar continues to dwindle near intermediate-term support.

Next week brings a light data calendar; and even Fed-speak is relatively light as we only hear from Charlie Evans, Patrick Harker, James Bullard and Loretta Mester. Not on the list are the major market movers of Janet Yellen, Stanley Fischer, William Dudley or John Williams. And given the activity from the prior few weeks, this relatively light week of drivers can be an opportune time for trends to confirm; highlighting which themes may be the most proactive for traders to follow in the coming weeks. Below, we look at three of the more interesting price action themes to come into question for next week.

Tug of War at Support in EUR/USD – Who Will Win?

Probably one of the more surprising factors for 2017 price action has been strength in the Euro. While the ECB has made no pledges towards ending their out-sized QE program, markets have begun to fear the inevitable; which is the tapering of the bank’s stimulus program as European data continues to show signs of improvement.

At the most recent European Central Bank meeting two weeks ago, ECB President Mario Draghi did his best to allay this concern by saying that the bank hasn’t even discussed the prospect of exit strategies yet. But even with this overt dovishiness, the Euro remained relatively strong. That ECB meeting merely elicited a test of support at 1.0850; and three weeks later, that level is still showing as intermediate-term support. On the chart below, we’re looking at the trend in EUR/USD that’s shown throughout 2017; and notice how price action is currently residing near the mid-line of the channel. 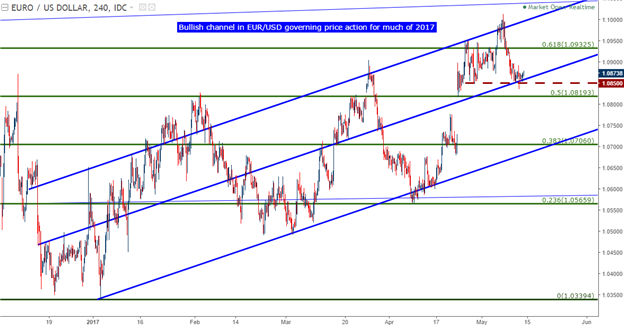 On the chart below, we’re getting a bit more granular with recent EUR/USD price action on the hourly chart. Notice how a quick test below 1.0850 earlier the week was quickly bought, and a bit lower on the chart at 1.0819 we have a key Fibonacci level that could be looked at as secondary support. 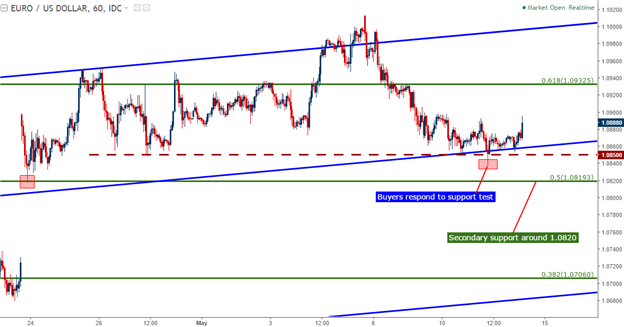 Is Cable (GBP/USD) Close to ‘Turning Over’?

This driver goes back almost a month, but the surprise announcement by Theresa May of early general elections in the U.K. elicited a topside breakout in GBP that, as of yet, has not retraced. In the weeks after that announcement, support continued to show above prior range resistance, but after yesterday’s Bank of England ‘Super Thursday’, prices have continued to test intermediate-term support zones.

The big question here is whether the downtrend in GBP has more room to run. After dwindling in the range near support for over six months after the ‘flash crash’ in the currency, this recent topside pop could have just gotten bears a bit more room to work with short-side setups. Conversely, if markets do anticipate a ‘less dovish’ outlay from the Bank of England in the coming months, which would likely need to be driven by British inflation numbers, this intermediate-term support can hold as bulls garner control of GBP price action. 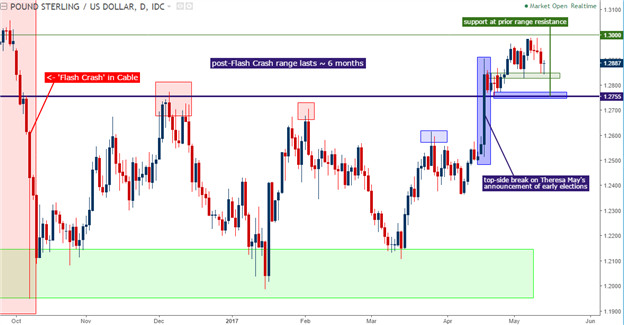 Will the Yen Find Resistance to Continue Running Lower?

One of the more pronounced trends after the U.S. Presidential election in November was the re-emergence of profound Yen weakness. This is very much based on the Central Bank paradigm of markets expecting the BoJ to be one of the ‘more dovish’ major CB’s; and given the decades’ long saga that the nation of Japan has had with deflation, it makes sense to look at the BoJ as one of the ‘more loose’ Central Banks.

But after that aggressive move in the six weeks after the election, USD/JPY spent much of the first four months of this year congesting-lower. Around mid-April, Yen weakness began to show again, and sellers continued to sell the currency as the up-trend in USD/JPY began to re-appear. On the chart below, we’re looking at the bull flag that had formed after the post-Election run, adding in the recent topside breakout. 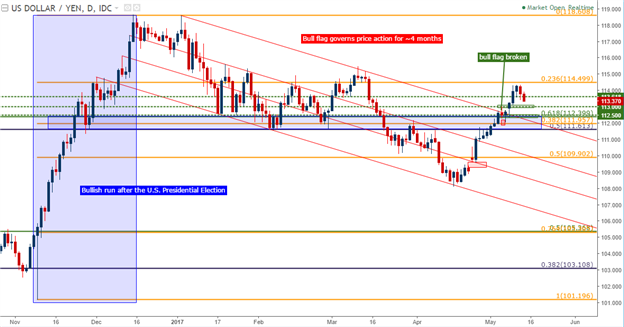 On the hourly chart below, we’re looking at potential support levels in USD/JPY in the effort of bullish continuation. 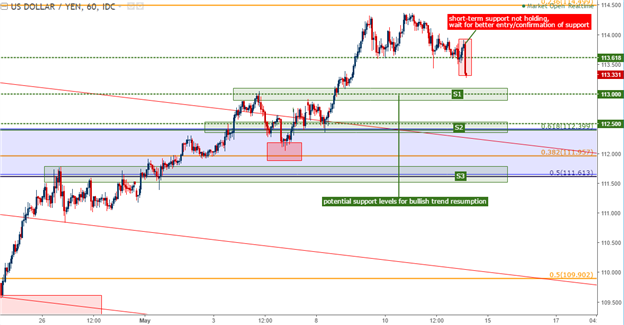