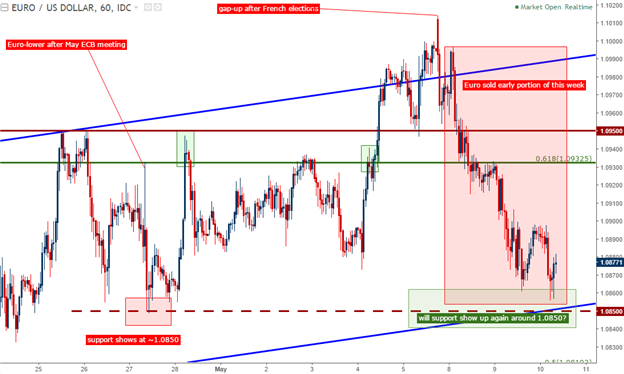 - The past few weeks have seen the development of some fairly-consistent trends in the FX-space with Euro strength and Japanese Yen weakness; both of which are seeing some degree of pullback on the morning.

- Below, we look at each market with a series of levels to investigate for trend-continuation strategies.

The Euro is under a bit of pressure this morning after comments from ECB President, Mario Draghi. At a speech in The Hague earlier today, Mr. Draghi re-iterated the need for accommodative monetary policy; and this comes as European economic data has shown continued signs of improvement. Mr. Draghi attempted to talk-down the prospect of QE-taper at the last ECB meeting by saying that the bank hadn’t yet discussed exit strategies from their current QE program, which is set to expire in December. Just after that ECB meeting, the Euro sold-off temporarily until bulls jumped back in to show support around the 1.0850 level.

On the Daily chart below, we’re looking at the longer-term formation in EUR/USD as the pair continues to trade in a bullish channel that’s developed since early-2015. This highlights just how strong Euro price action has been against the U.S. Dollar; and the fact that we may see a deeper retracement while the longer-term bullish nature remains intact.

Of particular interest is the level at 1.0820, as this is the 50% retracement of the post-Election move in EUR/USD. This is also below that prior support iteration at 1.0850; so if 1.0820 comes into play, that likely means quite a few long position stops getting taken out before support may show-up a bit deeper. If 1.0820 shows, this could be an attractive area to watch for ‘higher low’ support in the effort of top-side, bullish continuation entries. 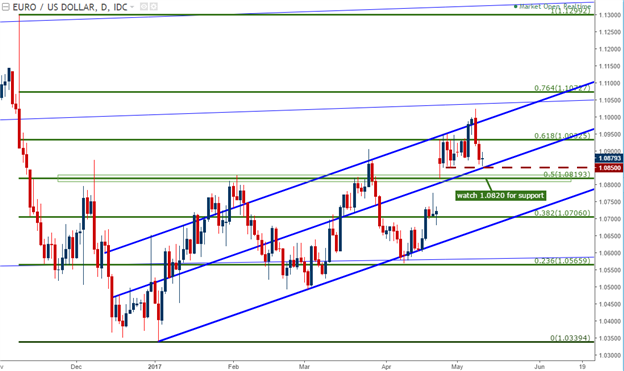 Another strong trend seeing some pullback on the day is the recent trend of Yen weakness. One of the big takeaways after the first round of French elections three weeks ago was the re-emergence of rampant Yen weakness. While the Euro remained relatively strong for the first couple of weeks after that election, the Yen moved into a very consistent trend of losses that’s continued, for the most part, up until this morning. On the Daily chart, we’re looking at this recent run of Yen weakness after USD/JPY spent most of 2017 digesting post-Election gains. 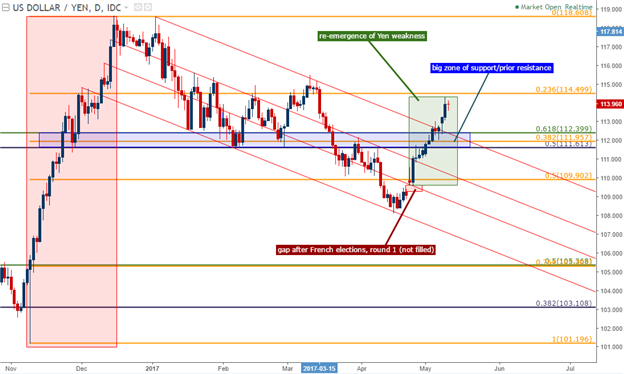 On the hourly chart below, we’re looking a bit more closely at this recent bullish move in USD/JPY; and notice how buyers have shown-up around the 113.50-level to offer a bit of support this morning, while a potential resistance level looms ahead at 114.50. So, the up-trend is overbought, but remaining supported; and this could be a situation where traders may want to see a deeper pullback before looking to add bullish exposure in USD/JPY or bearish exposure in the Japanese Yen. On the chart below, we look at three potential areas to watch for such an occurrence. 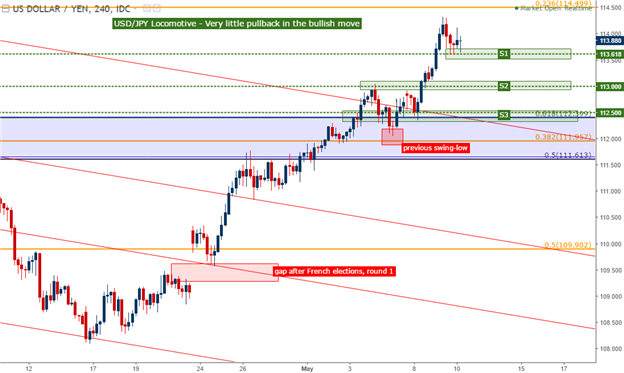