A Big Week for the Euro Awaits: Beware the Gap-Risk

- Next week presents heavy risk for the Euro, as pivotal elections in France (on Sunday) are followed by a key European Central Bank meeting on Thursday.

- French election results are expected to begin coming-in around 8PM in France, which is 2PM in New York. This is a few hours before market open, so we’re looking at considerable gap-risk for any asset attached to the Euro over this weekend.

On Sunday, we’ll begin to hear the results from the first round of French elections with polls beginning to report at around 8PM in Paris (2PM in New York). This is a few hours ahead of market open, so be extremely careful with gap risk over the weekend with any asset attached to the Euro. This can include metals such as Gold, as any uptick in geopolitical risk can bring with it macroeconomic implications.

But even after markets wade through the first round of French elections, a pivotal European Central Bank meeting is on the calendar for Thursday morning and many are looking for signs or clues that the ECB may be nearing readiness to start tapering QE. So, next week presents a heavy dose of potential for volatility around the European economy. Below, we look into three of the more interesting Euro-markets as we head into next week.

This will likely be the focal point on the Sunday open as markets and investors attempt to gauge risk around those French election results. The general perception is that if either Jean-Luc Melanchon or Marine Le Pen make it into the second round, the Euro will face some element of weakness on the basis of enhanced political risk in Europe. Both candidates present outlier views, one from the far right and the other from the far left; but with either taking a place in the second round, markets will likely remain unsettled in the near-term.

However, if we get a second round with Emmanuel Macron and Francois Fillon, we’re probably going to see a dash of Euro-strength as that political risk abates before we head into the ECB meeting later in the week, on Thursday morning.

EUR/USD is continuing to see some element of support around the 1.0700 figure, which is the 50% retracement of the move from the February lows up to the March highs; and there’s a bullish trend-line that can be found by connecting the low in January to the low in March (shown in red below). Given that we’re coming off of a very recent higher-high (3/27) and a very recent higher-low (4/10); and EUR/USD could have the makings of a bullish-move in its future. Key will be respect of that prior low set on April 10th around 1.0570.

Given this bullish structure, EUR/USD could be optimal for plays designed for Euro-strength. That backdrop of Euro strength would likely bring along a recess in risk aversion; which could further current themes of USD weakness. 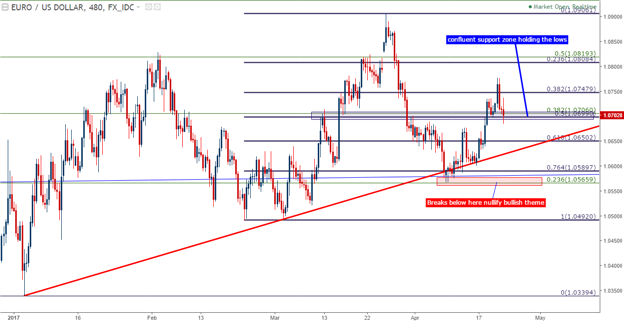 While EUR/USD has been putting in bullish price action, EUR/JPY has been showing the opposite. We discussed this pair at length yesterday in the article, ‘V-Shaped Rally into Resistance’, and we highlighted a key area around ¥117.50 that was showing a ‘lower-high’. This is a key area as this zone is the 50% marker of the major move in EUR/JPY comprising the low from last July up to the high set in December; but perhaps more proactively this level had helped to set support when EUR/JPY was in the midst of its massive price drop. This support level eventually succumbed to selling pressure, but when price was on its way back up, sellers re-emerged here to show another ‘lower-high’ off of resistance at old support.

For those looking at Euro-weakness plays, EUR/JPY could be attractive as this could coalesce a couple of themes together. Should either Melanchon or Le Pen make it into round two, we’ll likely see some element of risk aversion on an uptick in geopolitical risk. That would mean Euro weakness and, likely, some element of Yen strength. This could expose deeper support levels around ¥115.00 or, perhaps even as deep as ¥112.50. 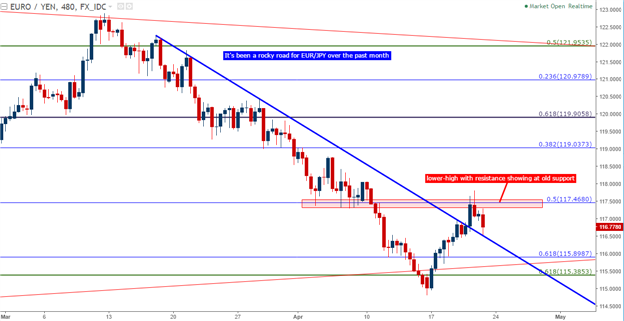 Another Euro-market of interest is EUR/GBP. After this week’s quick spike in GBP on the news of early British general elections, the pair ran down to a key zone of support that’s helped to hold the lows in the pair since just after last year’s Brexit referendum.

For those looking to take on bullish Euro exposure going into this week’s election, that support zone could be very interesting. 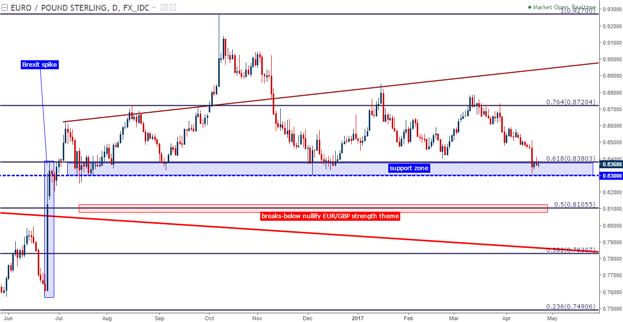