- A slow news environment has offered a respite in many financial trends. Today, we look at three of the more interesting setups from a price action perspective.

- The big event from this week was the surprise announcement of early elections in the U.K. We look at price action in GBP around this announcement, while also delving into longer-term themes in Oil and Gold prices.

One of the more noteworthy events thus far on the week was the surprise announcement from British PM, Theresa May, of early general elections. The move has largely been applauded by analysts as a cogent political move ahead of what’s expected to be a terse negotiation around Brexit; but for traders and investors the bigger question is whether Tuesday’s announcement is a legitimate ‘game-changer’ for the U.K. economy.

The British Pound burst-higher on Ms. May’s announcement, breaking above the range that’s denominated price action in the pair since the ‘flash crash’ in early-October. But as we warned as it was happening, the move was very new and traders would likely want to avoid chasing-higher until more confirmation was seen. Since then, we’ve seen prices pullback a bit to find support at that same level that had previously offered resistance – around 1.2775. In yesterday’s technical piece on GBP/USD, we looked at how traders could take a risk-focused approach towards continuation strategies in Cable.

On the chart below, we look at the updated price action in GBP/USD, with eyes on how one might be able to continue to plot top-side strategies up to the 1.3000-big figure. For those that do want to take on short-exposure in Cable, fading this recent move-higher – they’d likely want to wait for this higher-low around 1.2775 to give way before plotting the short-side of the move. 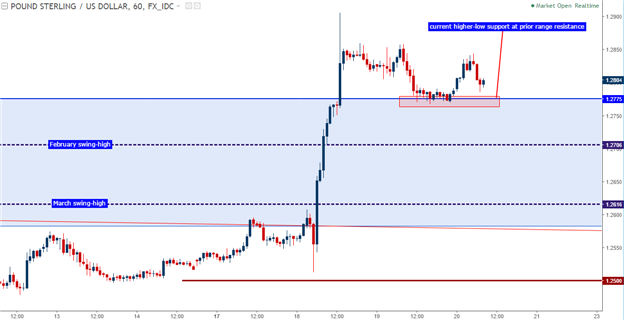 Oil prices have been swinging wildly of recent, and much of this has been driven by prognostications around OPEC and a continuation of last year’s OPEC/Non-OPEC deal. The current deal is set to end in June, but as of this morning reports that Saudi Arabia announced that Gulf-based Oil producers have reached an agreement on extending the deal.

So, this is still very early stage; and this likely isn’t the last twist to the story that we’ll hear regardless of whether or not an extension is agreed-upon; but for traders there is a very interesting technical observation taking place at the moment, and that’s the continued price action taking place around the 18-year trend-line in WTI. 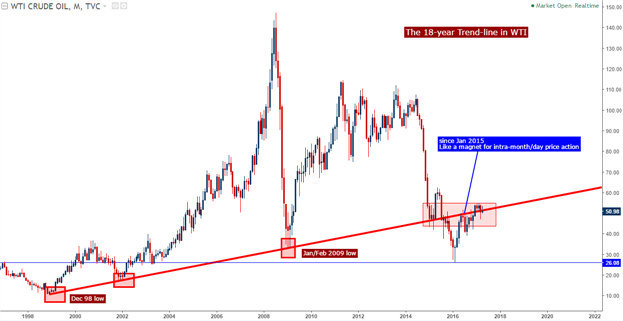 This multi-year trend-line is relevant to near-term price action because this is what’s currently helping to show resistance. For those looking at short-size exposure in WTI, this can be helpful for stop placement attached to continuation strategies targeting $50 or lower. 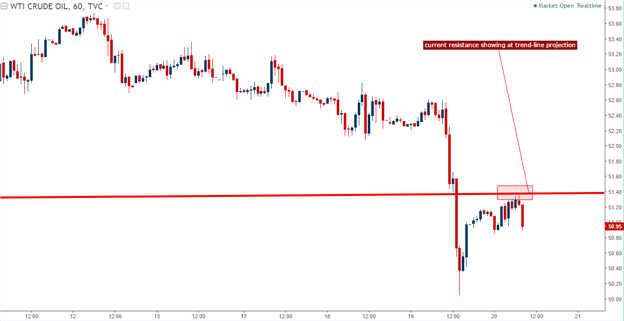 Another commodity market seeing considerable volatility of recent has been Gold. As geopolitical tensions heated up over the past couple of weeks, Gold prices put in even more extension of the ‘rate hike rally’ that started after the March Fed meeting. We looked at the technical setup in Gold on Tuesday just after prices had run into the down-ward sloping trend-line that can be found by connecting the July-high to the election-spike. As we advised, traders would likely want to wait before chasing the move-higher, and since then we’ve seen a bit of softness develop on intra-day charts. First, we look at the Daily chart to get the ‘bigger picture’ view of what’s been going on in the Gold market: 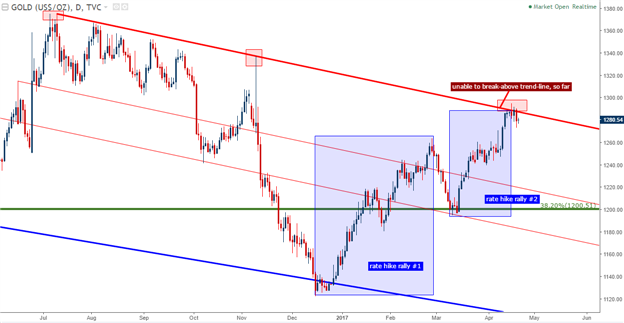 By drawing a Fibonacci retracement on that major move examined above, taking the July 2016 high down to the December 2017 low; we can find a series of levels that could be usable on an intra-day basis. We’re currently testing the 38.2% retracement of that move around $1,279.29. Traders would likely want to treat this level with caution given the numerous tests that we’ve seen of recent without the ability for buyers to have pushed prices-higher. But a bit-lower, we have a very interesting price action swing around $1,261 and around the psychological level of $1,250, we have the 50% Fibonacci retracement of that most recent major move. Each of these could become usable for top-side continuation approaches. 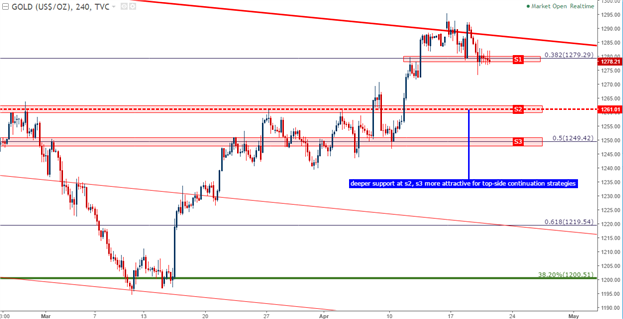