- The British Pound is sharply-higher on the day after the surprise announcement from British PM, Theresa May that the country will hold snap general elections on June the 8th of this year.

- This has sent Cable into a resistance zone that’s held the highs in the pair since the ‘flash crash’ in early-October. Does this morning’s announcement have the potential to turn this from a short-squeeze into a legitimate bullish trend?

The big news on the morning highlights yet another geopolitical pressure point as British PM, Theresa May, announced that she is calling for early general elections in the U.K. with a vote to be held on June the 8th. Given Prime Minister May’s considerable advantage seen in polling numbers, this can be seen as a potential strategy to garner political control through Brexit negotiations, as few actually expect her to be up-seated.

But if recent history has proven anything, political polls should be taken with a grain of salt as actual election results speak far louder and electorates are difficult to predict. The immediate impact to the British Pound on this morning’s surprise announcement was a gust of strength into a resistance zone that’s held the highs on the pair since the currency’s ‘flash crash’ in early-October. Many have been attributing this Sterling strength to the political move of PM May, and this may be the case although it would be far too early to definitely say. More likely, this morning’s shocking announcement presented yet another risk factor for Sterling traders, and this could further encourage closing of short positions.

To be sure – many bullish moves begin as short squeezes; first with shorts closing positions as fear of a move-higher begins to gain traction, and then as the move advances that sentiment can shift from short to long as traders chase the move-higher. For traders that are looking to trade a move-higher, looking for a bit of additional confirmation via price action could be an attractive way of proceeding further by watching for potential ‘higher-low’ support around the 1.2580 area. This could be attractive as this area had offered a couple of prior instances of short-term resistance; and should the six-month high at 1.2775 get taken-out, the door can be opened for bullish momentum strategies as Cable would be in the process of making ‘higher highs’ and ‘higher lows’. For now, traders would likely want to be cautious of chasing this move-higher. 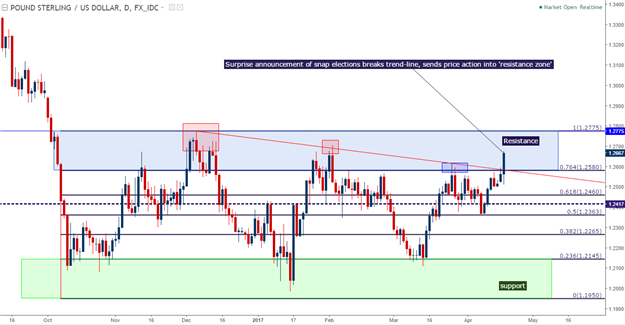