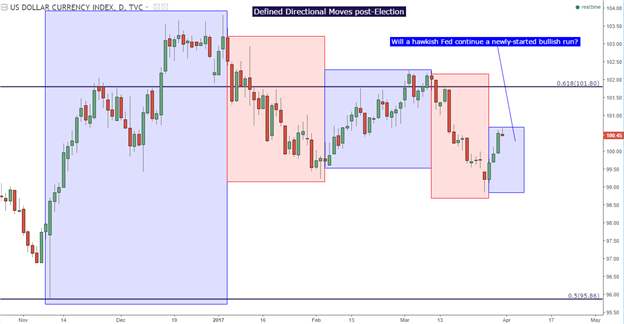 - Today marks the end of the first quarter, and below, we look at three of the more interesting price actionthemes for Q2.

- Q1 brought us even higher all-time-highs in stock prices along with a rate hike that few were expecting until two weeks before; and next quarter will likely be drive by just how hawkish the Fed might be at their June rate decision.

Monday marks the first day of the second quarter, and as we close the books on Q1 there are quite a few themes of considerable interest. Below, we look at three of the more interesting situations in the FX-world for next quarter.

Just How Hawkish is the Fed?

The first quarter saw quite a bit of change in this department as the first two months saw little expectation for a hike in March, as odds for a hike were hovering around 30-40% as we came into the month. But then the Fed got to work, and a series of Fed speeches in the first week of March helped to propel those odds-higher, along with the U.S. Dollar, as traders braced for a rate hike.

But when the Fed did hike rates for only the 3rd time in 10 years, the U.S. Dollar sold-off with aggression; and continued-lower until the last few days of the month; at which point the Fed has appeared to get to work again in the various interviews and commentaries that they’re sharing with the general public. This week saw no fewer than 13 Fed speeches already; and we have more on the docket for today on this last day of Q1. But of particular note is the tonality of those speeches as the Fed’s been rather apparent in attempting to transmit a hawkish-outlook to markets: We heard Mr. Eric Rosengren of the Boston Fed mention the idea of four rate hikes in 2017, which would be even more-hawkish than the Fed’s own expectations as we came into this year. The net impact of this week’s Fed-speak has been re-ignition of the bullish theme in USD, as seen below:

The big question around this theme for Q2 is whether or not the Fed hikes in June. Currently, markets are giving an approximate 59% chance for a rate hike in June (via CME FedWatch); and as the bank gets more vociferous around the topic of ‘two to three more’ rate hikes, we’ll likely see these odds continue to firm-up around a potential move in June. On the chart below, we’re looking at the shorter-term setup in the Greenback in the effort of plotting near-term bullish continuation setups. 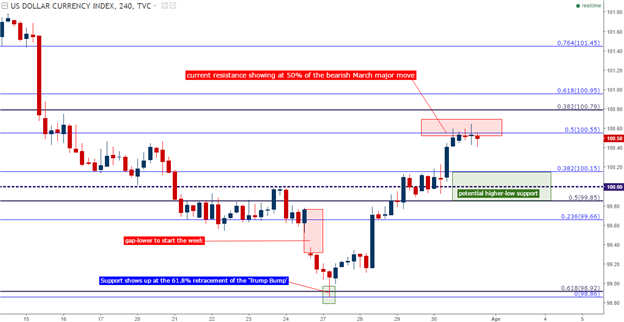 Will the Cable Range Finally Give Way?

The Range in GBP/USD is now almost six months old. And despite the fact that the Pound has continued to dwindle around 30-year lows for almost half-a-year now, bears have been unable to create any significant drive below the psychological level of 1.2000.

But one area that has responded to that incredibly weak GBP have been importers and producers, as inflationary pressure in the U.K. continues to rise. At first, the BoE seemed unmoved by the prospect of stronger inflation; under the presumption that the risks of Brexit would outweigh the risks of potentially-higher inflation. But Brexit hasn’t turned out to be the business-killer that the BoE expected; at least not yet, and we’ve even heard as much from the chief economist at the Bank of England, Mr. Andy Haldane. In February, U.K. inflation spiked-higher; and at the March BoE meeting we saw the first vote for a rate hike since Brexit, and the meeting minutes indicated that we may be seeing more than one dissenting vote at future rate decisions.

This gives the appearance that we may be seeing a shift within the Bank of England around the prospect of near-term rate policy. For its part, Cable firmed-up as these more-hawkish indicators came into markets; but the longer-term range still very much applies here. 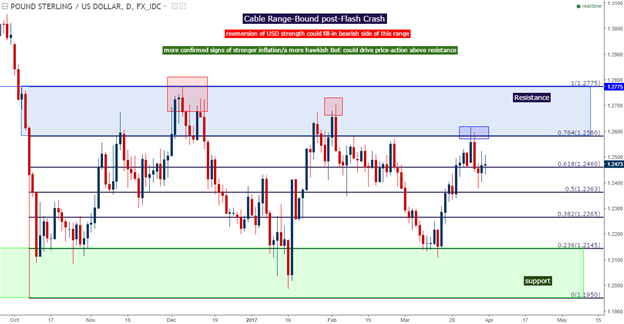 The big question for this theme in Q2 is whether the BoE gets more-hawkish with their inflation expectations in their next QIR, due to be released on May 12th at the bank’s next Super Thursday.

Is This the Quarter that Stocks Begin to Stall?

Stock prices rode a rocketship-higher in the first part of Q1 to set even-higher all-time-highs; and this is likely at least part of the reason that the Fed felt confident enough to hike in March. But after that rate hike, matters appeared to change, at least for a couple of weeks, as stock prices set a series of ‘lower-lows’ and ‘lower-highs’ in the two weeks after.

The S&P gapped-lower to start this week after the failure around the AHCA, but support showed-up shortly after and since, we’ve seen prices running-higher. But we’ve just set a lower near-term low after this week’s gap-down; and we haven’t yet seen the prior swing-high on the daily chart taken-out at 2,381. So there are still bearish qualities on the short-term setup in the S&P 500.

The big question here is if this is finally the quarter that stock prices don’t extend their meteoric run. A more-hawkish Fed could drive this theme, as could further questions around fiscal policy; as investors tighten-up long positions ahead of another potential rate move.

On the chart below, we’re looking at near-term price action in the S&P 500; and the level around 2,316 could be interesting should prices fall-below, as this is the 50% marker of that 2017 major move and if price action does drive below – the door could be opened to near-term bearish strategies in the S&P 500. But until then – this is still a long-term, extended bull market. 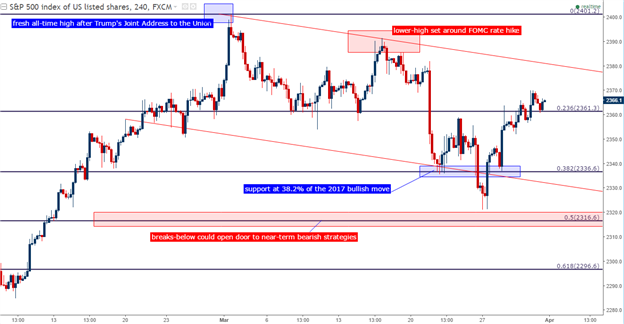