- The Dollar remains relatively weak as DXY sits very near a key support level. There is a considerable amount of Fed-speak today, so volatility can certainly remain. Pay particular attention to the 1:00 PM ET period today, as three Fed speakers will be giving speeches at the same time, including Fed Chair, Janet Yellen.

- Matters haven’t been the same since that last rate hike. The Dollar has been unable to catch a lasting bid, and the S&P 500 has put in a series of lower-lows and lower-highs. Below, we look at current price action in the S&P 500 and key-USD markets such as EUR/USD, GBP/USD, and USD/JPY.

This week opened with worry as both stocks and the U.S. Dollar gapped-lower after the healthcare bill in Congress failed to move forward. This was likely a controlled dose of risk aversion on worries around the potential for fiscal stimulus in the form of tax cuts later in the year. But the fact that so much concern circulated so quickly should be noted, as this may be highlighting a theme that could come to prominence in the future.

Matters haven’t really been the same since that last rate hike from the Fed. The U.S. Dollar has been unable to catch a lasting bid, and the S&P 500 has developed a series of lower-lows and lower-highs. This movement in the Greenback has put many major currency pairs in interesting spots with support or resistance inflections not too-far-off. Below, we’re going to start off by looking at the S&P, and then we’ll move over to FX-land to look at price action setups in major currency pairs.

The longer-term setup is still very much bullish, as we’re just a couple of percentage points off of the all-time-highs. It’s the shorter-term price action that appears to be garnering so much attention, as we’ve seen the initial stages of a bearish move with a sequence of lower-lows and lower-highs. Prices gapped-lower to open this week, but after stocks opened for trade in the U.S. investors pushed prices back-up. We’ve seen sellers come-in during the overnight session, and this could bring on another ‘lower-low’. But – if we can see support develop above yesterday’s gap-low, we could have a higher-low to work with for a bullish continuation setup. The level at 2,336 is particularly interesting for higher-low support, as this is the 38.2% Fibonacci retracement of the 2017 move in the S&P, and this level had provided support after the S&P’s initial dip-lower last week. 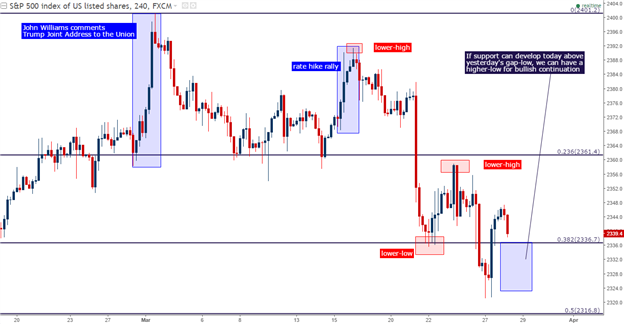 The Greenback has seen less of a recovery than what’s transpired in the S&P 500. Of particular interest is an unfilled-gap from this week’s open. Current support is showing at the 61.8% Fibonacci retracement of the ‘Trump Bump’ in the Dollar, and this could be an attractive area to begin looking for some strength in the Greenback. For those that do want to sell USD, they’d likely want to wait for either a) resistance to show or b) for prices to break below this support at 98.92 to get some evidence that the bearish move might have continuation potential; after which seeking our resistance at old support could open the door for bearish-strategies. 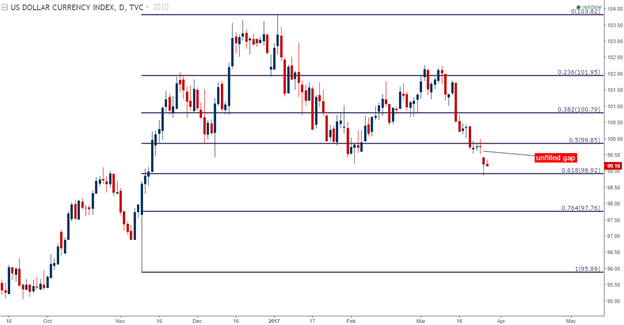 That fresh four-month low in the Greenback syncs well with the fresh four-month high in EUR/USD that was seen yesterday. We have seen some sellers come-in as response to that new high, exposing an elongated wick on the top of yesterday’s daily candle. The area of interest in EUR/USD is from the zone from 1.0750 to 1.0820. The price of 1.0750 is a major psychological level and the prior swing-low; while 1.0820 is the 50% retracement of the most recent major move on the Daily chart; and this price has seen two different iterations of prior resistance. 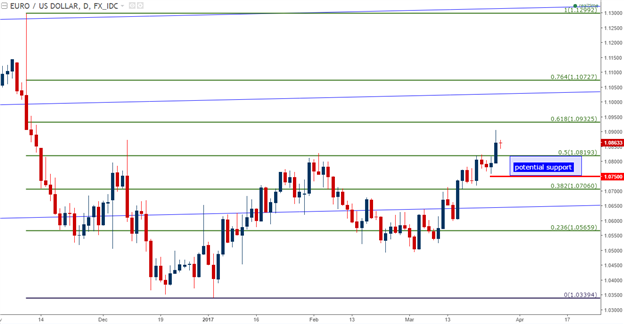 Tomorrow marks the day when Article 50 will finally be enacted. This is when Theresa May will notify the European Union of their intention to leave the EU. It seems as though Sterling strength has become somewhat of a foregone conclusion after Brexit is triggered; but we should be careful there, as Cable has just ran into an interesting zone of resistance that’s held in the pair for more than five months. On the chart below, we’re looking at the range that’s developed in Cable since the ‘flash crash’ in October. 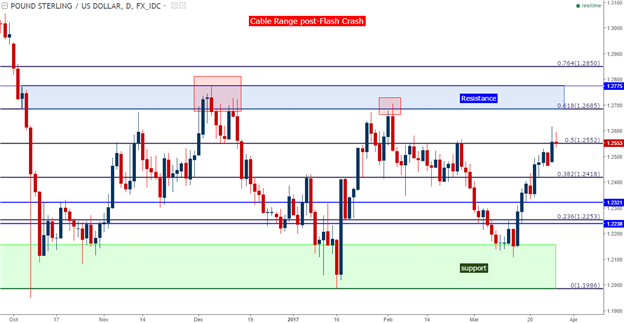 USD/JPY fell through a big support zone last week when it crossed-below ¥111.61. This support zone had held-up price action in the pair throughout February and into March. Of particular interest is that while many USD-trends were retracing in the early part of this year, USD/JPY put in a more-shallow move. And as the U.S. Dollar has retraced approximately 61.8% of the post-Election move, USD/JPY is still above the 50% marker of the same move. That level comes in at ¥109.90, and just ten pips above we have the major psychological level at ¥110.00. 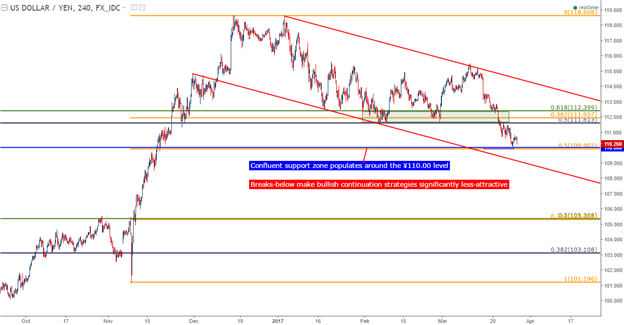 Short-term price action in USD/JPY is still bearish. But we can see where buyers had showed-up ahead of this confluent support zone around ¥110.00-below; and this can be highlighting buyer-anticipation around a key level of support. If buyers show-up again today to produce a higher low above yesterday’s swing at ¥110.077, then we can have another short-term higher-low with which to stage a reversal approach of the short-term momentum into the longer-term, still technically ‘bullish’ trend as we’re above the 50% marker of the post-Election move.

If price action does pose a sustained break-below this level, bullish approaches should be abandoned, at least in the near-term. 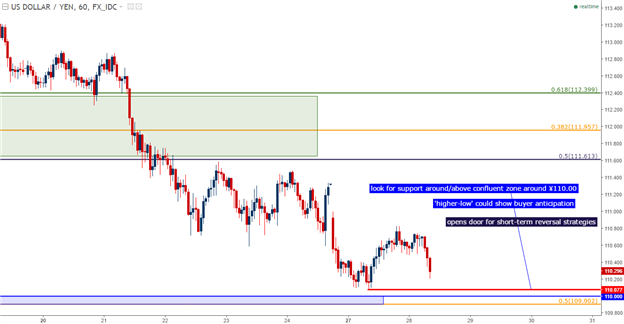