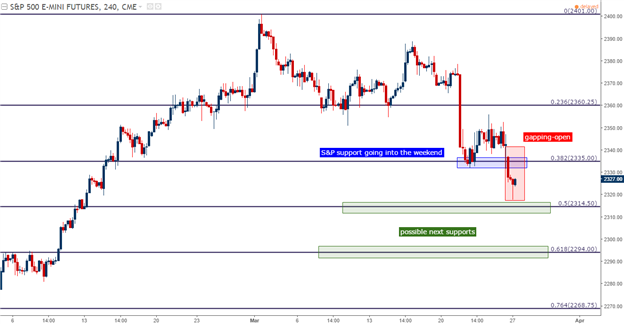 Fed-Speak the Focus for This Week After Stocks, Dollar Descend

- Equity markets have gapped-lower after the weekend announcement that no health-care bill will be passed. This has raised fresh questions around the continuation potential of the ‘Trump Trade’.

- The bigger issue at the moment is the Fed. The Federal Reserve hiked rates two weeks ago, and matters haven’t really been the same since. This week brings 14 different Fed-speeches to markets, and these will likely be the drivers for this week.

In Friday’s piece we warned of price gaps in markets around the healthcare bill; with the logic being that a tally of votes on the bill was unlikely to come-out ahead of market close on Friday – so when markets re-opened for business on Monday we’d have a new piece of information to price-in.

That healthcare bill did not get through the House of Representatives, and with this being the first major piece of legislation from the Trump administration fresh questions have been raised around the rest of the President’s policy outlay; mainly in the realms of tax cuts and infrastructure spending. Markets have gapped-lower to open this week, and as questions continue to circulate around the continuation potential of the ‘Trump Trade,’ we’re likely going to see some pressure remain. On the chart below, we’re looking at price action in the E-Mini S&P Futures contract in order to focus on the move after this week’s open. We also look at two potential levels for ‘next stop’ support.

This isn’t isolated to U.S. issues: We’re also seeing an aggressively-bearish move in the Nikkei. Last week saw a break of an ascending wedge formation but sellers were unable to create significant-drive to break the Nikkei out of its months’ long range. Friday of last week saw an under-side re-test of the prior trend-line; with this morning’s price action driving prices further away to create a ‘trend-line rejection’ on the setup. This gives the appearance of bearish continuation potential. 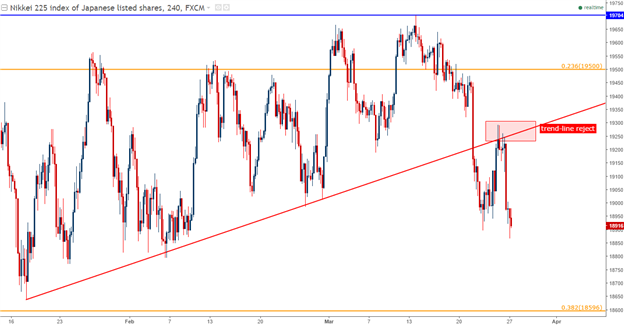 The Nikkei isn’t the only market out of Japan seeing some interesting volatility after the open. The ‘sharp repricing’ of the Trump Trade has created considerable Dollar weakness, and this has created de-facto Yen-strength against many other currencies as risk-aversion flows reverse prior trends. USD/JPY is running down to a very interesting support level around the ¥110.00-handle. This is a confluent level, as we have not only the psychological level of ¥110, but ten pips below we have the 50% Fibonacci retracement of the ‘Trump Bump’ that came-in to markets after the Presidential election.

If support develops around the ¥110.00-handle in USD/JPY, an attractive reversal setup could be sought. But if support doesn’t hold – and if we do see a sustained-break below this zone around ¥110.00 – the prospect of bearish continuation would look considerably more attractive. 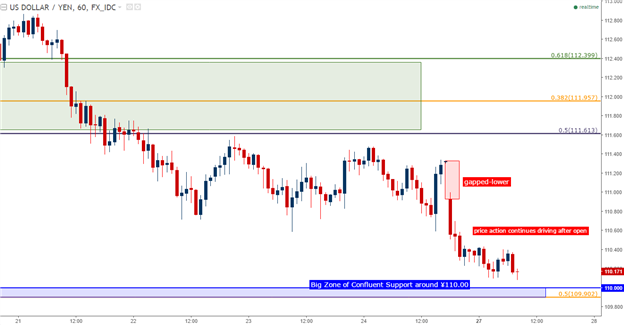 Matters Haven’t Been the Same Since that Last Hike (What to Watch For):

This week sees 14 separate Fed-speeches on the calendar. This will likely be the key driver for markets as we probably won’t be hearing any revelations on the health-care or tax cut front.

Much of the world’s attention appears to be focused directly on Washington. But for much of the ‘Trump Bump’, the key driver of the Federal Reserve has remained. What’s really appeared to complicate current matters was the most recent rate hike in the middle of March. When we came into the month there was little expectation for a move, with odds hovering around 30-40%. But just ahead of Donald Trump’s Joint Address to the Union on February 28th, we heard from San Francisco Fed President, John Williams, who provided some very hawkish commentary, indicating that the Fed may have been ready to move in two weeks at their next rate decision. The following morning, after President Trump’s Joint Address to the Union, the S&P 500 spiked up to set a new all-time-high. And then the rate hike from two weeks ago prodded a quick-extension of that rally; but this failed as sellers came-in to rebuke that bullish advance with a lower-high. 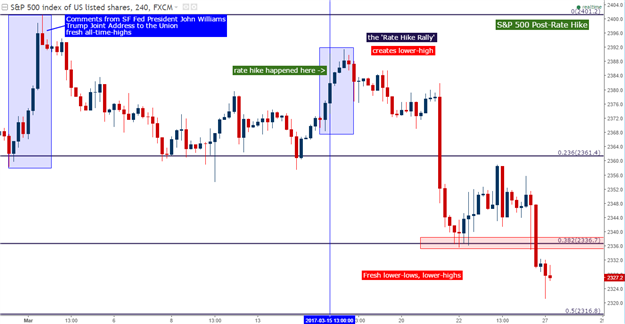 So, both U.S. stocks (and many risk markets) and the U.S. Dollar have put in bearish-moves after a) the rate hike and then b) the failure of Congress to put together a passable health-care bill. This week brings 14 different Fed speeches to the fray, and this will likely denominate that ‘next move’ across capital markets. If the Fed sticks with their persistently-hawkish language, indicating that two more rate hikes are on the horizon, then we could see this bearishness continuing in the near-term But, if the Fed does pump the breaks, urging caution after a recent rate adjustment, we may see some element of strength return to equity markets.

Below, we look at the 14 Fed-speeches that are on the calendar for this week (all times Eastern). Pay special attention to mid-day on Tuesday, as we’ll have Esther George, Janet Yellen and Robert Kaplan all speaking at the same time.

Fed-Speak for this Week: