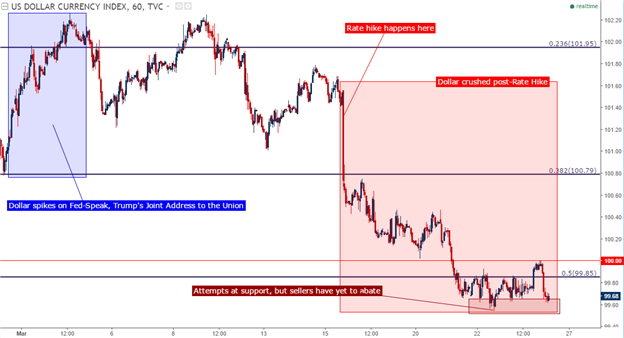 - We go into this weekend with heavy gap risk around the upcoming healthcare vote. The results of the vote will likely not be known until after market close today; and when markets re-open on Sunday, we may have a new driver to work with.

- This week saw some interesting support breaks in the S&P 500, the U.S. Dollar and USD/JPY. Below, we dig a bit deeper behind each move with an eye on what might be ‘around-the-next-corner’.

The past month has seen quite a bit take place in financial markets. As we came in to March, expectations were relatively low for a hike at the Federal Reserve’s meeting in the middle of the month, hovering at around 30-40%. But on the last day of February, just ahead of Donald Trump’s Joint Address to the Union, a series of Fed speakers talked up the prospect of a move at the March meeting and the Dollar began to firm ahead of President Trump’s speech. And when that speech was delivered, S&P futures spiked higher along with the Dollar, very similar to what was seen during the ‘Trump Bump’ when both the Greenback and the S&P were shooting-higher in tandem.

But during the first week of March that move in the S&P did not extend: The dollar remained supported as odds for a hike at the Fed’s March meeting continued to run-higher. But when it came time for this well-telegraphed rate hike to take place, the Federal Reserve left markets wanting when they didn’t upgrade their guidance for future rate moves; the logic being – if the Fed felt that the economy was so strong to support a near-term hike, this would be an opportune time for the bank to warn of additional future hikes given strength in the current backdrop. The fact that the Fed did not take that opportunity to guide rates higher showed one of two things. Either a) the Fed holds little confidence in the prospect of fiscal stimulus actually coming to fruition from the Trump administration or b) the current backdrop isn’t as strong as advertised (on the topic of inflation) and the Fed merely wanted to use this recent market enthusiasm to edge rates-higher by 25 basis points. This is taken from the rather intense sell-off that was seen in the Greenback around that rate decision, which, frankly, hasn’t yet stopped as price action remains near seven-week lows.

But since that rate hike, another series of questions has come-up; and that’s largely revolving around the potential for continued gains in red-hot equity market. The S&P gapped-higher after Trump’s Joint Address to the Union; setting a fresh all-time-high at 2,401. But since then, price action has had a different feel and we’ve seen a series of lower-lows and lower-highs develop; and this includes the first drop by more than 1% since Donald Trump was elected President; which set another lower-low. 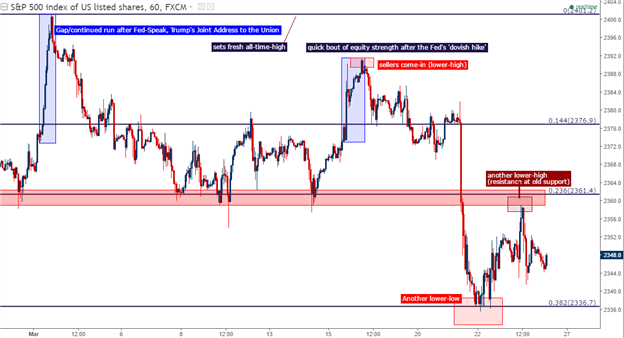 The challenging aspect around the S&P at the moment is one of political implications. It would appear that this most recent inclusion of bearish price action is coming-in around complications of the healthcare bill making its way through the House of Representatives. This is a messy situation, but apparently the vote is going to be held today. We likely won’t have results of that vote until after market close; and we’re likely going to be seeing this topic heavily debated over the weekend; so this can carry some pretty significant gap risk here. If the bill does pass, we’re likely going to see a burst of strength return. But if it doesn’t pass, we can see a continuation of this near-term bearish price action. 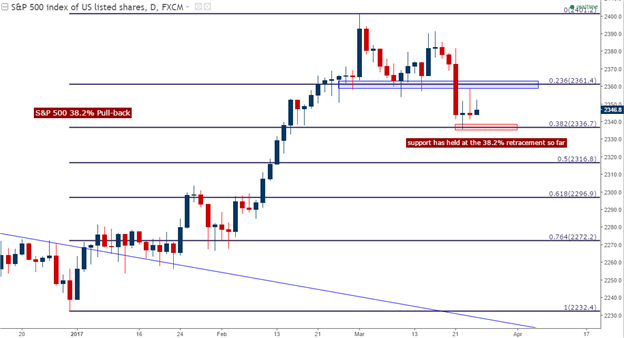 Another market with bigger picture connotations coming to light at the moment appears to be the Japanese Yen. The Yen had remained relatively-weak ever since the night of the Presidential Election; and with the U.S. Dollar was retracing those gains in January, the retracement was quite a bit lighter in USD/JPY highlighting the additional Yen-weakness that was being seen at the time. While DXY retraced almost 60% of its post-Election run during the month of January, USD/JPY went for a more-shallow ~38.2% retracement.

So this support break puts USD/JPY in a relatively cautious position. The longer-term trend is still ‘up’ as we’re trading about the ¥110.00 psychological level which happens to be confluent with the 50% retracement of the ‘Trump Bump’. If we fall below that zone next week, this could open the door to bearish strategies in USD/JPY. But until then, this could be an interesting zone to look for buyers to step-in after a break of a key support zone (which likely had quite a few stops from longer-term bullish positions get triggered). But if we pose a sustained break below the ¥110.00 zone, the prospects for bullish continuation aren’t so attractive any longer; and this can be an ideal area to investigate for stop placement on bullish positions or to use as a ‘trigger’ for bearish strategies on a sustained break-below. 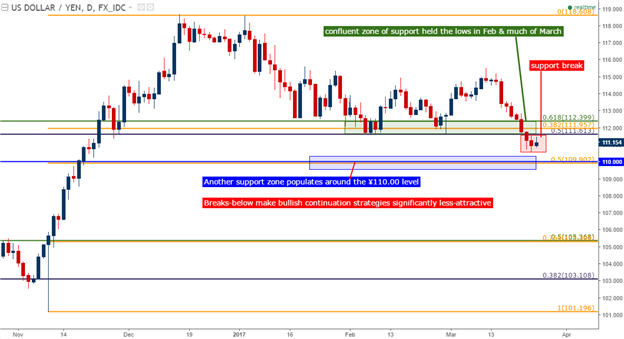