- Both the U.S. Dollar and U.S. Equity futures are driving-higher after last night’s Joint Address to the Union from President Trump; but that initial accelerant in the Greenback actually came-in before President Trump ever took the podium.

- Odds for a rate hike in March have been screaming-higher ever since comments from San Francisco Fed President, John Williams, made their way to markets. As odds for a March hike have continued to run-higher, interest rate sensitive markets such as USD/JPY and Gold have put in out-sized moves.

Last night’s non-State of the Union address from Donald Trump appears to be well-received by markets, at least thus far. As Donald Trump worked further into his Joint Address to the Union, US Equity Futures and the U.S. Dollar were both propelling-higher. But the initial accelerant for the Greenback actually appeared to take place well-ahead of President Trump’s speech, when John Williams of the San Francisco Fed gave comments that alluded to the Fed hiking rates in March. Now odds for a hike at the Fed’s next meeting are greater than 50% with that meeting date just two weeks away (currently 66.4%).

So, while the narrative will almost surely associate this top-side breakout in the Greenback to President Trump’s speech – that wouldn’t quite be accurate as Mr. John William’s commentary appears to have played a key role in the move. From a technical perspective, this gives the Greenback ammunition to move back into its bullish state, as DXY has just flown above the key level at 101.53. Perhaps more pertinent to market participants – this could potentially resolve the almost two months of digestion in the Greenback. If price action today closes above this level, then the move would be confirmed with a daily close and traders can look for continuation of this theme as we walk towards the Federal Reserve’s next meeting on March 14-15. 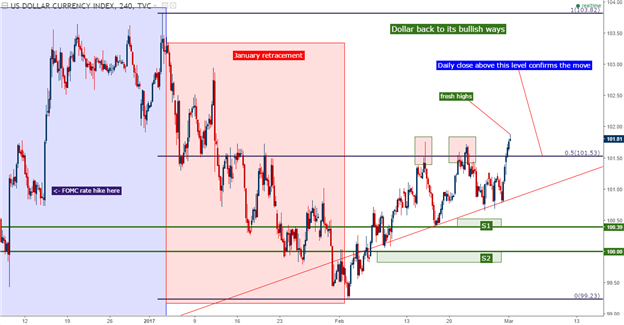 In yesterday’s piece, we’d highlighted USD/JPY as an attractive way to look for USD strength, particularly if the ‘higher rates’ theme began to come-back to markets. Just ahead of President Trump’s speech, a long USD/JPY setup was highlighted as part of a two-trade setup (with the other being short USD/CAD) via an Analyst Pick on DailyFX.com.

Key to the setup was the long-term zone of support that ran from 111.62-112.40. Price action had tested this zone a few different times in February, and as Mr. William’s comments came into markets yesterday, USD/JPY popped-higher and continued to run throughout Trump’s speech. This brings up the possibility of the long-term bullish trend returning to USD/JPY. 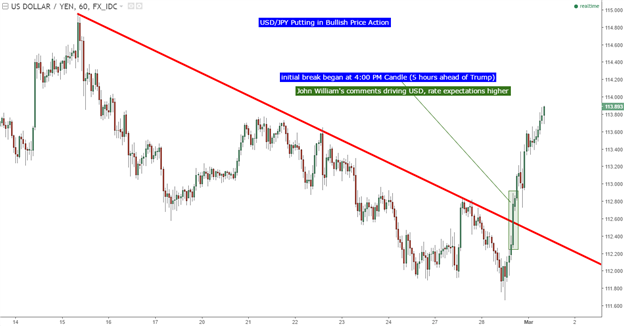 For those looking to fade USD-strength

This looks like a fairly dangerous area at the moment, as Gold prices had gotten quite overbought during the two-month run-higher. But as those higher rate fears have continued to filter into markets, Gold prices have gotten punched-lower. For those that do want to look to fade this recent rash of USD-strength or, perhaps more accurately, this most recent bump-higher in rate expectations, Gold might be an attractive venue. For those investigating such a strategy, there are a couple of key support levels of interest. The level around $1,234 had caught quite a few swings when that trend was on the way-up; and just a bit below at $1,229 we have a key Fibonacci level. The more attractive longer-term zone resides around the $1,215 level, as this is the 38.2% retracement of the 2013-2015 major move in Gold prices. 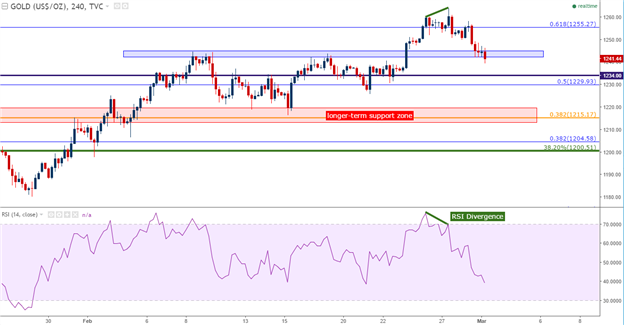