What Might Bring Life Back into USD? FOMC, NFP May Help

- The U.S Dollar retracement continues as the Greenback has run-down to find support at the 50% Fibonacci retracement of the post-Election move.

- The remainder of this week and most of next bring a plethora of U.S. drivers to markets – the highlights being next week’s Federal Reserve meeting and Non-Farm Payrolls on Friday.

As the U.S. Dollar runs deeper into a widely-watched support zone, traders and journalists have begun to question the sustainability of the Greenback’s uptrend. To be sure, the bullish move in the U.S. Dollar started in curious fashion with an aggressive reversal on the night of the U.S. Presidential Election. But as the world did not fall of its axis after Donald Trump was elected President, excitement around the potential for new fiscal policies helped to drive prices higher. And once we came into December, the one-two combo of the European Central Bank and then the Federal Reserve both contributed to additional strength in the Greenback with each of their actions. The ECB adding more stimulus, weakening Euro and thereby strengthening USD; and the Federal Reserve hiked rates for only the second time in the past 10 years while also saying that they were expecting a full three rate hikes in 2017.

But as we came into the New Year with prices hovering near 14-year-highs, traders began to take profits out of what had been a fairly surprising move. And as the Greenback has continued to stair-step down to lower levels of support, buyers have been unable to offset the continued selling. As of this morning, the U.S. Dollar is trading right-around the psychological level of 100 on ‘DXY’, and this is also around the 50% retracement of the post-Election move at 99.85.

Since the turn of the New Year the U.S. Dollar has faced a combination of profit taking from the prior up-trend combined with a lack of bullish drivers to bring more demand into the marketplace. The lack of potential drivers may not be a long-term issue though, as the remainder of this week and then most of next week bring to markets a litany of U.S. drivers. Tomorrow brings U.S. Trade Balance numbers and Friday the release of GDP and Durable Goods. But it’s next week where matters get really interesting: 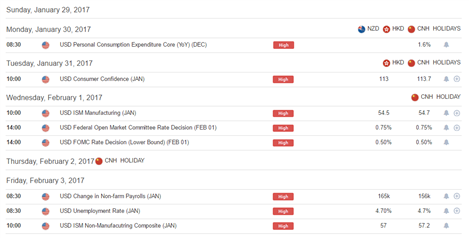 Derived from the DailyFX Economic Calendar; prepared by James Stanley

Next week brings the Fed on Wednesday and then Non-Farm Payrolls on Friday. These are currently two of the biggest and most important push-points on the U.S. Dollar, and we’ll see both in the spotlight next week. This is an opportune time for the U.S. Dollar to ‘fly or die’ to either extend or reverse that previous bullish-move.