- Today brings on the Inauguration of Donald Trump as U.S. President. This will likely dominate global media for the foreseeable future, but anticipating impact to the U.S. Dollar can be a challenge, at least initially, as Presidential Inaugurations don’t usually bring much by way of new information.

- Most U.S. Markets saw a strong move-higher after the Presidential election, but of recent have been solidifying those gains with some form of retracement. We look at three such markets below with the U.S. Dollar (DXY), the Russell 2000 (IWM) and the S&P 500.

This afternoon at Noon Eastern Time, President-Elect Donald Trump will be inaugurated in Washington D.C. This will likely dominate headlines the world-around; but it will be difficult to anticipate any direct market price action as Inaugurations don’t traditionally bring much by the way of new, workable information for analysts and strategists to build projections off of. But if there is one thing that the world should’ve learned from this most recent Presidential Election – very little is ‘normal’ when it comes to Donald Trump.

U.S. Markets have been in a relative pattern of congestion as post-Election gains have been retracing over the past few weeks. On the chart below, we’re looking at the U.S. Dollar Daily chart, with the recent top-side drivers of the Presidential Election and the December ECB/FOMC indicated. 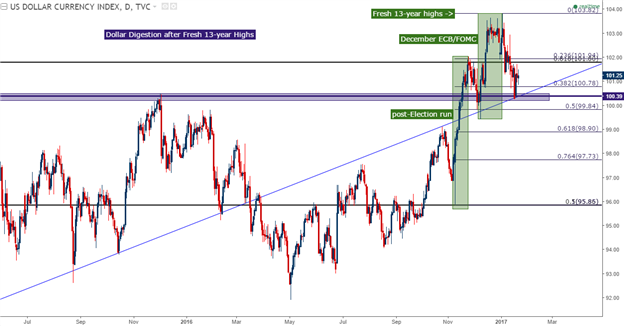 On the hourly chart below, we can focus in on this recent retracement to see price action attempting to form a short-term bottoming pattern as an inverse head and shoulders pattern has shown-up: 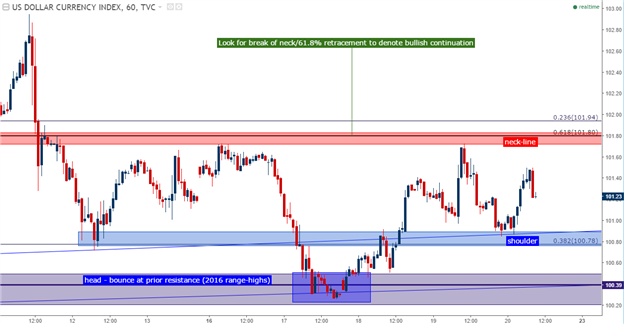 Equities markets in the United States have generally seen less give-back than what’s been taking place in the U.S. Dollar, but nonetheless have seen similar consolidation taking place. Below, we’re taking a look at the Russell 2000, which has developed a fairly clean trend-channel as price action has retraced approximately 23.6% of the post-Election move. 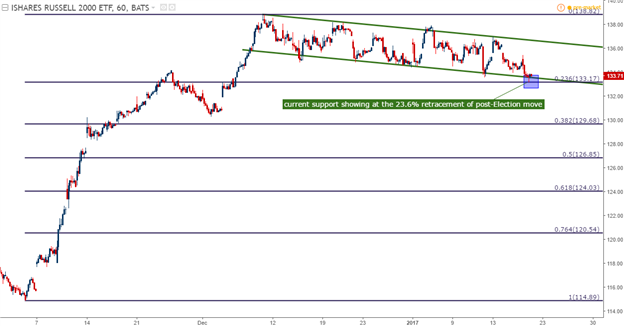 The above chart highlights how mild this retracement has been relative to what’s taken place in the U.S. Dollar. In order to try to seek out short-term support on IWM, we can dial-in a bit further to take a look at the hourly chart, with a Fibonacci retracement applied to the most recent short-term move taking place around the December ECB announcement. 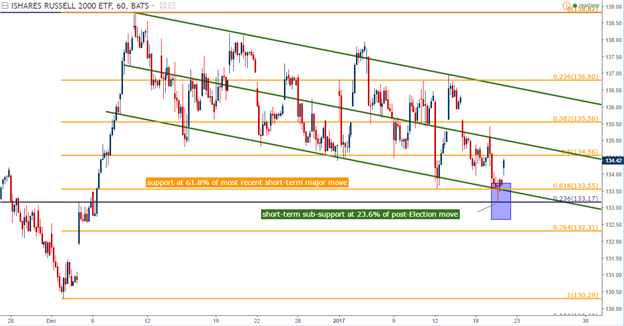 The S&P 500 has been considerably more-resilient than the Russell 2000 of recent. The difference here is that the S&P saw a quick support test in December, ahead of the New Year and before price action established a range with higher-lows; while the Russell 2k has been grinding lower for the past month.

On the chart below, we’re looking at the S&P 500 with a focus on that near-term range that’s developed after the turn of the New Year. Notice how price action in the S&P is remaining very near those all-time highs while the Russell 2k has been retracing. In many cases, small caps can lead large caps, particularly at market turns, as risk aversion will generally show more-quickly with smaller, less stable types of names that are more widely-represented in the Russell 2k index as opposed to the S&P 500. 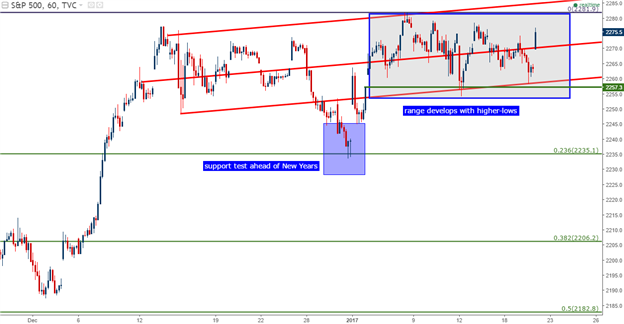