Trump Hits the ’Strong Dollar’ While May Drives Cable Higher

- Theresa May’s Brexit speech has driven Cable higher as the British PM has laid out plans for executing Article 50.

- The U.S. Dollar continues to retrace as part of the ‘bigger picture’ trend. The 38.2% retracement of the post-Election move did not hold as support, but will buyers show up at the 50% Fib?

The big item thus far on the morning is Theresa May’s Brexit speech in which the PM of the U.K. took a softer stance than what many were expecting, indicating that she’s going to include Parliament in the process of triggering Article 50.

In the speech, PM May said that she would not seek membership in the EU and would instead look to cut new trade agreements. This would give Brexiters their demand of controlling access of those entering the country, but would bring on the uncertainty of leaving the single market. Mrs. May also said that she didn’t want the U.K. to be ‘half-in, half-out’ of the EU, and that she wanted to remove as many obstacles as possible in the trade relationship with Europe in order to strike a new ‘customs agreement.’ Another big point of emphasis in this speech is that Mrs. May wants to remove the U.K. from the jurisdiction of the European Court of Justice.

This morning’s speech produced a notable move in the British Pound as GBP/USD ratcheted up to set a higher-high. This is a reversal of the prior bearish price action, as Cable had just tested the psychological support level at 1.2000 after Sunday’s open. But with this new information that an executed Brexit may not be as hard as feared, we may see this relief rally continue for a while longer. 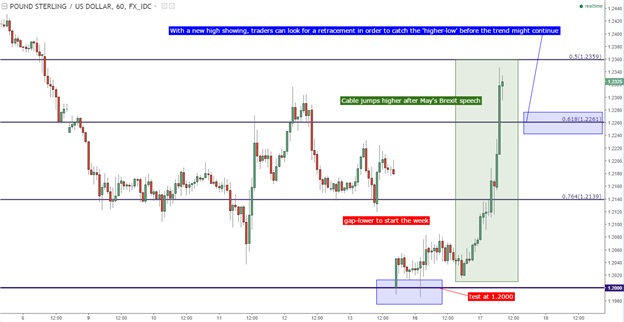 CEO’s the world-around have come to fear the Twitter prowess of President-Elect, Donald Trump. And while this morning’s news comes from a newspaper interview rather than directly from the President-Elect’s Twitter account, the fact that its pertinent to the U.S. currency rather than just a single company is noteworthy. In an interview with the Wall Street Journal, President-Elect Trump said that the U.S. Dollar was ‘too strong’ because other economies like China are holding down the value of their currencies.

And while this recent turn-lower in the U.S. Dollar started well-ahead of the release of this interview, this very much echoes a sentiment that’s becoming more common across markets with fear around the possibility of protectionist-like trade policies out of the United States.

This is likely way too early to prognosticate, as Donald Trump hasn’t even yet taken office; that won’t take place until this Friday. And also given the meteoric rise in the Greenback after the election, it makes sense that we’d see a bit of pullback with a lack of additional top-side drivers. One potential driver is released tomorrow when U.S. inflation numbers for the month of December.

On the chart below, we’re looking at the recent pullback in the U.S. Dollar in scope of the bigger picture move. Notice how support at the 38.2% retracement of the post-Election move hasn’t held – and this opens up the 50% Fibonacci retracement as that next level of lower-level support. The 50% Fibonacci retracement of this move is confluent with the psychological level of 100, so this could be a very novel place for support to develop on the Greenback. 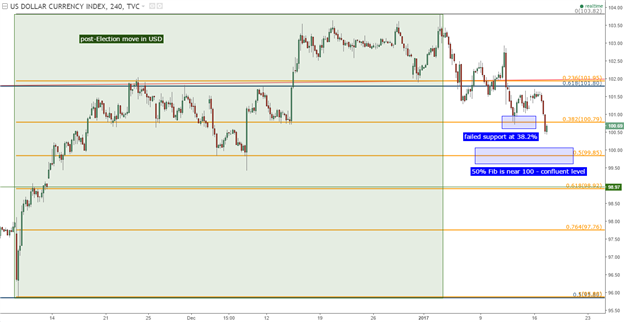