- Two of the strongest currencies in the post-Election environment are seeing various forms of weakness; with the British Pound testing a long-term zone of support while the U.S. Dollar attempts to get back into its prior bullish up-trend.

- This week’s economic docket is relatively light, with the highlights being Chinese data (on Tuesday) and Fed-speak (on Thursday).

This week is relatively light on the data front with the highlights being Chinese data on Tuesday and and then five different Fed members giving speeches on Thursday. But even with the expectation of fewer drivers on the calendar, there are a litany of price action themes that could see further development throughout the week. Below we look at three of the more pivotal themes across global markets.

Is the U.S. Dollar Ready to Go Bullish Again?

After a blistering close to 2016 the U.S. Dollar has faced quite a bit of volatility in the first nine days of 2017. After first running-up to set a new high to start the year the Greenback fell through support only a couple of days later. Given how strong the trend in the U.S. Dollar had been running and this break of support made sense as an indication of congestion or a deeper retracement; but last week’s Non-Farm Payrolls report helped to form a bottom in the Greenback and prices have been running higher ever since.

We aren’t quite out of the woods yet: As we had looked at last Friday, the U.S. Dollar has yet to take out its prior ‘swing-high,’ so price action isn’t yet bullish and won’t be until that takes place. At this point, it looks as though we have a ‘lower-high’ which could precede a deeper retracement. Of specific importance for this theme are those Five Fed speakers on Thursday. 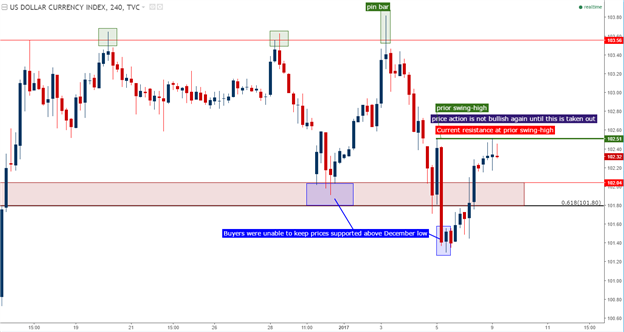 Will Cable (GBP/USD) Find Support in the Long-Term Zone?

One currency that has made a definitive movement thus far on the week is the British Pound as price action is crashing lower. Renewed talks around Brexit with the prospect of a ‘harder Brexit’ has brought renewed selling into the Pound to test a zone of support that’s been rather rigid since first coming to the fray in October of last year. Retail traders are certainly bearish with 79% currently short, but given Sterling’s inability to break below this zone in October, confirmed support could lead to a plethora of interesting setups across GBP-pairs. 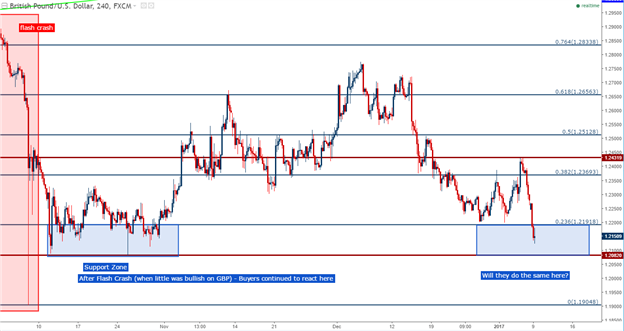 To start last year concerns around the Chinese economy raged across global markets. Much of that concern abated after Chair Yellen’s Humphrey Hawkins testimony last February; but more recently concerns around China have begun to resurface as the economy is seeing FX reserves dwindle further and further. The recent moves in the Yuan are somewhat representative of these concerns as Chinese regulators have guided the Yuan through quite a bit of volatility over the past few trading days.

Tomorrow brings us Chinese Inflation and New Yuan Loans, each of which could help get a glimpse into recent Chinese economic performance in order to gauge how aggressively any form of slowdown may be creeping-in to China’s economy. 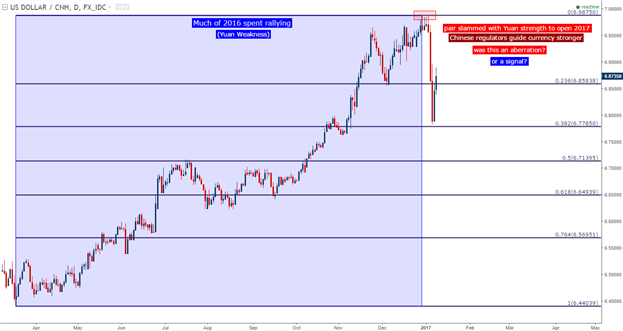