- December Non-Farm Payrolls were released in the United States, and the headline print came in below expectations, but wage growth printed stronger at 2.9% versus an expectation for 2.5%.

- The U.S. Dollar’s blistering up-trend finally took a break this week, with price action breaking below support. But short-term price action hasn’t yet turned bullish, as we’ve just made a lower-low and have yet to see a ‘higher-high’ on the hourly chart.

The December Non-Farm Payrolls report was released in the United States this morning with a slight miss on the headline number, printing at +156,000 jobs added to American payrolls versus the expectation for 180,000. But within the report were some positive data points that help to obviate that miss on the headline print.

The initial reaction in the Greenback was one of strength as the Dollar moved back up to a zone of resistance/prior support around 101.80. This is the 61.8% Fibonacci retracement of the 15-year move in the Dollar, and this is also the same level that had showed up as resistance in November after the initial launch of the ‘Trump Trade.’ 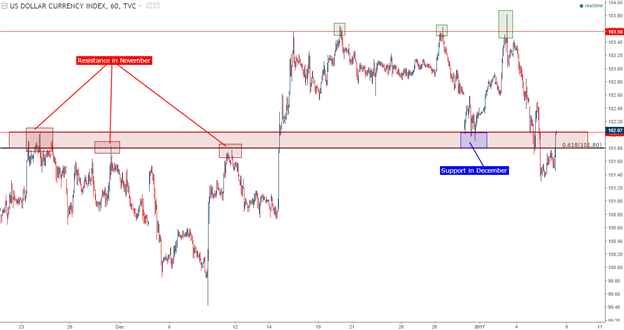 As usual, traders should exercise prudence if chasing a news-driven move on a Friday. This move in the U.S. Dollar, in particular, should be treated with a great deal of caution as short-term price action is coming-off of a very recent ‘lower-low,’ and until we take out the prior ‘lower-high,’ questions around continuation prospects will remain. 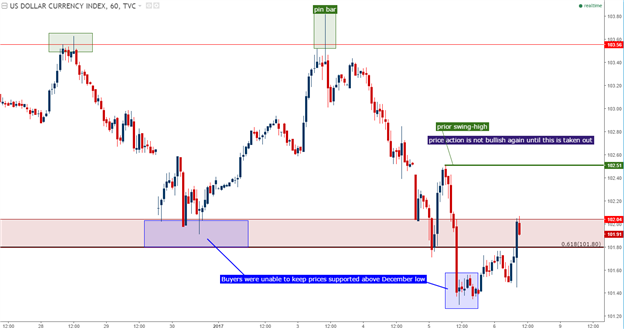 EUR/USD Resistance at Underside of Prior Bear Flag

The recent support break in the Dollar helped to bring strength back into EUR/USD. The pair had finally broke below the year-and-a-half old bear flag formation in December with the one-two combo of the ECB and Federal Reserve. But that bearish price action appeared to slow as prices tested deeper below support. When this recent bout of Dollar weakness began to show to kick off 2017, this brought EUR/USD right back up to that prior bear flag formation, with old support now showing up as new resistance. 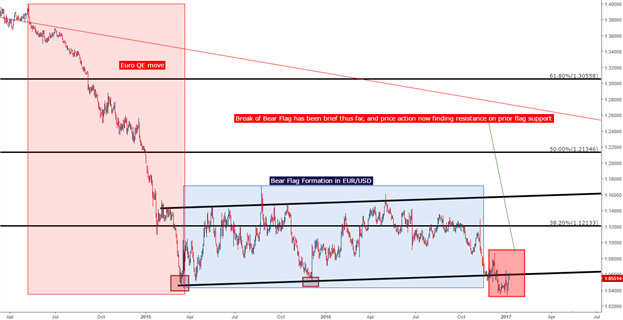 For traders that are looking at long-USD continuation strategies, this iteration of resistance can open the door for bearish positions in EUR/USD. On the chart below, we look at near-term price action with relevant levels. 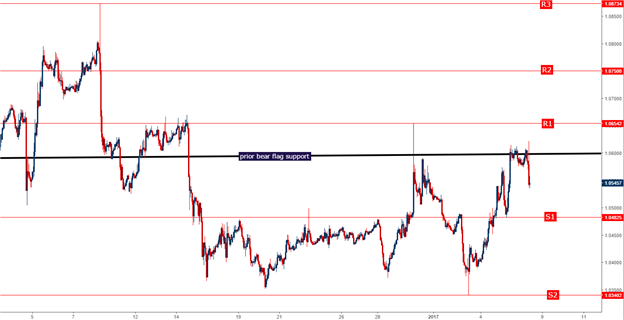