- The post-Election rally in global markets persists, although both the U.S. Dollar and U.S. stocks have been unable to close above new highs after last month’s rate hike.

- At 2pm today, the Federal Reserve delivers minutes from that most recent rate decision; and within those minutes, investors may get a better idea of just how positive (and in-turn, hawkish) the bank may be in the early portion of 2017.

USD: Short-Term Range in Longer-Term Trend Ahead of FOMC Minutes

At 2 PM ET today the minutes from the most recent Federal Reserve meeting will be released to markets. These meeting minutes are from the rate decision last month in which the Fed posed only the second hike in the past 10 years; but perhaps more interesting, and more relevant for price action was the Fed’s increased guidance for rate hikes in 2017 and 2018.

The most recent Federal Reserve meeting seemed to solidify the theme of U.S.-strength that’s become rather prominent since the election of Donald Trump as U.S. President. With many economic data points, particularly those that are sentiment-related hitting fresh new highs, hopes for stronger growth have continued to push both the U.S. Dollar and U.S. equities higher.

But since that rate hike was delivered along with improved guidance for the next two years, the U.S. Dollar has found a zone of resistance that has yet to give way. On the chart below, we’re looking at the post-rate hike price action in the U.S. Dollar. 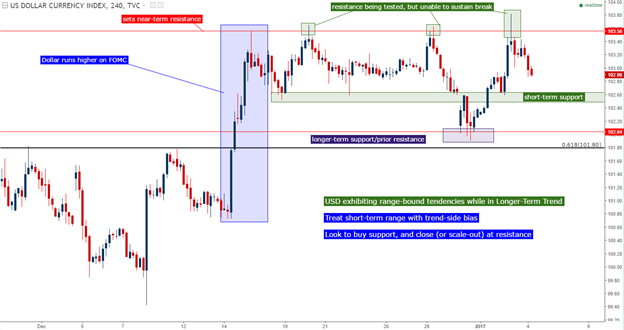 S&P 500: Also Ranging but with a Slightly More-Bearish Bias

To close out last year we wrote about the current level of valuations in U.S. equities, positing that the excitement from the post-Trump rally appears to have driven markets to rather expensive levels. But just because a market is ‘expensive’ or overbought – that doesn’t necessarily mean that stock prices have to move lower to more adequately reflect reality. As John Maynard Keynes himself had said, markets can stay irrational far longer than you or I can remain solvent; and while this most recent move may not quite be at ‘irrational’ levels just yet, the fact of the matter is that prices are governed by supply and demand and not valuations.

So, an ‘expensive’ market may not be enough to completely drive a short-thesis; but it could certainly be a reason to avoid chasing stock prices while at fresh all-time-highs as the Federal Reserve looks to more actively ‘normalize’ policy in 2017.

However – to quality this, much of the selling in the S&P’s most recent move appeared to take place as we wound down 2016 in what could’ve been ‘window dressing’ as traders and fund managers closed-out positions ahead of the year and quarter-end. Since New Years, price action in the S&P has been bullish as we’ve run-higher by ~30 handles. 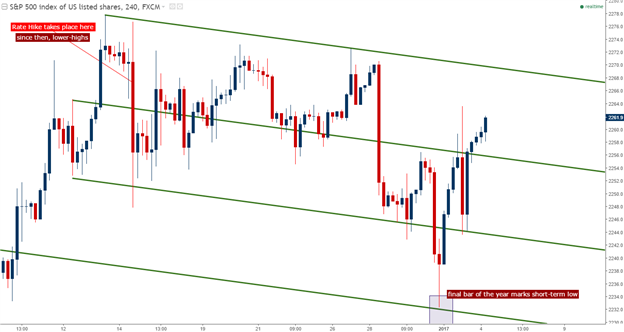 While excitement and exuberance is driving many markets around-the-world, it would appear that sentiment from the open of last year has done a 180° when fear was driving price action.

One matter that is the same, however, is worry around Chinese markets. As we started last year, Chinese stocks hit limit-down on the first few trading days of the year as selling engulfed Chinese capital markets. And just a few weeks after that first rate hike in nine years and we had some very legitimate concerns that were creating risk aversion around the world. Since then, Chinese stocks have recovered as the final 10 months of 2016 saw a consistent up-trend develop (Chinese A-shares shown below). 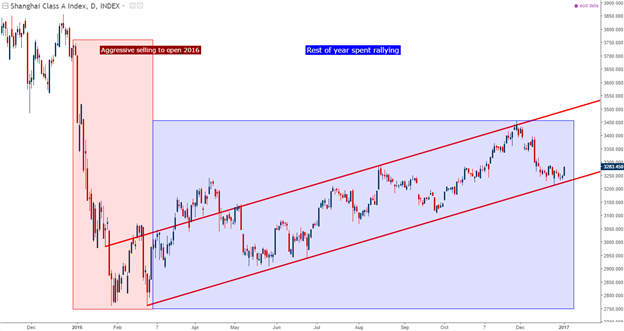 But even with this strength re-developing in Chinese stocks, worries around the Chinese economy continue to persist, and most recently those concerns have been directed towards capital flows coming out of China. With a currency so incredibly weak throughout much of 2016, Chinese investors are likely looking at the concept of diversifying funds into currencies that may not get so weak. Chinese regulators are likely responding by trying to strengthen the Yuan in order to stem some of those capital outflows in the effort of protecting their FX-reserves. And for a Central Bank engaged in a fixed-floating rate regiment, this can present complications; especially if the U.S. economy is truly moving into a rising rate environment.

To open 2017, Chinese regulators have guided the Yuan-higher; going against the trend of Yuan-weakness that has been rather pervasive since March of last year. This iteration of Yuan-strength is unlikely to last for long, but does serve as warning to those looking to just sit in long USD/CNH positions as currencies controlled by regulators can lead to bumpy rides. 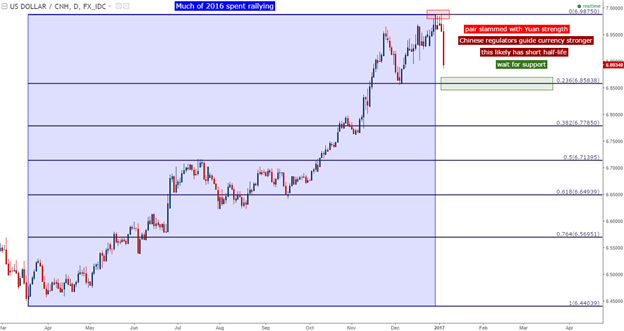