- As the year closes on an extremely-positive note with many equity indices at or near-highs, taking a look at the bigger picture shows that stocks are at historically-expensive levels as we move into a year in which the Fed is expected to continue normalizing policy. It can be dangerous to chase here.

- The Fed has said that they’re expecting three hikes for next year. Last year, they said they were looking for 4 in 2016 and we only saw one. Considerable volatility was in USD throughout much of the year on the implication of how fast or slow the Fed was looking to hike rates; and this will likely remain a pressure point for markets in 2017.

- If you’re looking for trading ideas, check out our Trading Guides. If you want something more short-term, please check out our Speculative Sentiment Index (SSI) indicator.

We closed last year by listing the ‘top three themes for 2016’ as continued weakness in China, deeper drops in Commodity Prices and, of course, the rate hike dilemma at the Fed. Each of these themes played some role in the development of global markets throughout the year, but it was really the surprises on the political spectrum that a) took so many by surprise and b) defined this year’s price action.

Stocks – How Long Can We Sustain the Rally?

We move into 2017 on a significantly more positive note as we now have the promises of continued monetary accommodation from many major economies along with the hopes of fiscal stimulus out of the United States. Stock prices have run-up to even-higher all-time-highs and general market sentiment is getting closer to a state of euphoria than what has been seen for a long, long time.

But now that much of the market is looking in one direction (up) and with prices at fresh highs, it’s time for traders and investors to look at the big picture to evaluate whether current valuations are warranted by the fundamental backdrop; and frankly, they aren’t.

Hope appears to have let investors get ahead of themselves after the Presidential election, as equity valuations on the S&P 500 are nearing dangerous territory; levels that we’ve only been at a few different times over the past 100 years with pretty much each of those situations resolving very badly. (We discussed this in the article, Are U.S. Stocks Expensive? Yes.)

On the chart below, we’re looking at Shiller PE ratios on the S&P 500 since the year 1900. We’ve demarcated the level of ‘25’ as there are only a few historical instances in which stocks were this ‘expensive’ based on 10-year average, inflation-adjusted earnings. None of these have turned out well. So, sure, maybe this time is different… like we saw in 1999, investors were so euphoric around the ‘tech boom’ that valuations drove all the way up towards the level of ’45,’ far beyond where valuations have ever been at before.

So stocks being expensive isn’t a direct short-thesis. But it sure is something that a trader or investor should think about before ‘loading up’ for the next part of the move. And if/when stock prices do begin to move-lower for whatever reason triggers the selling, this is something to keep in mind as the ‘dips’ in equity prices may not be as forgiving as they were went stocks weren’t so expensive. 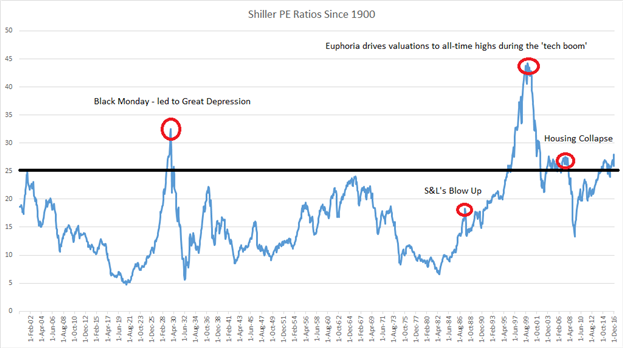 FOMC – Are We Really Going to Get Three Hikes?

Probably not; at least if history is any guide, we might get two given the addition of hope around the premise of fiscal stimulus.

The problem with three rate hikes in 2017 is a currency issue… If the Federal Reserve hikes rates 75 basis points throughout the year while the ECB is still in the middle of a QE-program, the Bank of England is actively buying corporate bonds and the Bank of Japan is fully-engaged in yield curve control, and Dollar-strength can eventually become a problem. This is something we heard Chair Yellen mention in January after the Fed posed the first rate hike in over nine years; that if the U.S. is one of the lone major economies actively looking to raise rates, the U.S. Dollar was probably going to receive considerable capital flows as investors drove into the Greenback to get those new, higher rates.

But a smaller scale of what led to Japan’s lost decades could, eventually, begin to show in the U.S. economy as exporters face pressure from a more expensive currency. A rising dollar, frankly, puts American producers at a disadvantage, even on their own home turf when currencies like the Yen or the Euro are held-down by dovish monetary policy. This is the under-belly of globalization: We’re all in this together, and we can’t avoid it. Fifty years ago, it may have been possible for an economy to recover in isolation; but today – that’s significantly more difficult as economies share pain and, to a lesser degree, gains.

As we move into 2017, the U.S. Dollar is at 14-year highs after the exuberant Trump-fueled rally broke above prior resistance. This is still a ‘young’ move so we likely haven’t seen this filter into actual consumer-level prices yet. But as the Greenback forges ahead, the probability of this becoming an issue continues to increase.

The big question for 2017 is whether or not the Dollar strengthens enough to where it becomes an issue for additional Fed rate hikes; and if it does – how will they look to contend with the issue?

Probably one of the more surprising turn-of-events from this year was the rise of populism. This is a bit more difficult to prognosticate, and that was proven to us by numerous pollsters throughout the year that continued to flail while striking-out with forecasts around Brexit and then the U.S. Presidential election. Politics are dangerous for markets because even if you did know how a given vote was going to turn out, there is probably little chance that you can predict the way that price action will respond. Last month’s election in the United States serves as proof, as much of the free-world was certain that a Donald Trump presidency would spell doom-and-gloom and, here we are at fresh all-time-highs.

Next year brings pivotal election cycles in the European stalwarts of France and Germany. Both countries are key to continued European-integration, and upsets in these elections could wreak significant havoc on the global economy; as there may be more at stake than just each national election.