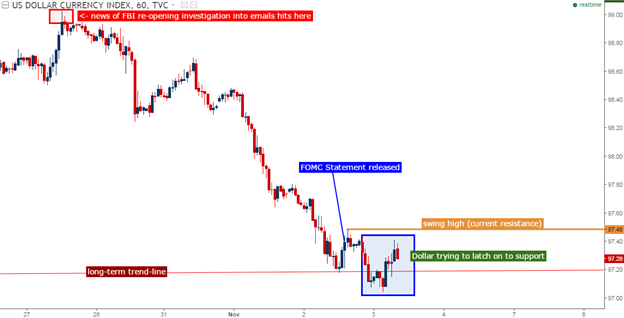 - Yesterday’s FOMC meeting produced little by way of new information; but in the aftermath markets have priced-in a slightly stronger probability of a move in December while the U.S. Dollar has remained relatively weak after this week’s run lower. This could expose USD in the event of a strong NFP read tomorrow.

- Tomorrow’s NFP announcement is coming with an expectation for +175k jobs to have been added to American Non-Farm Payrolls in the month of October. Should this number come out strong, especially above +210k, we could see an aggressive rally in the Greenback.

It’s been a busy week already across global markets and we still have one of the bigger reports of this week remaining in tomorrow’s Non-Farm Payrolls report.

At yesterday’s Federal Reserve meeting, the bank released a statement with very little change, and this was to be expected as U.S. Presidential elections are now just a short four business days away. The net result of the meeting’s statement was a slight firming of expectations for a rate hike in December, and the U.S. Dollar sell-off that had really heated up in the early portion of this week finally began to find some semblance of support. With Non-Farm Payrolls on the docket for tomorrow, this market will likely see some additional volatility to close out the week.

On the chart below, we’re looking at the deluge in the U.S. Dollar that’s been rather pronounced throughout this week. However, after yesterday’s FOMC statement, we can see the Greenback attempting to string together some element of support. Last Friday, we had looked at the 97.50 level on DXY as ‘big picture’ support for the Dollar. Price action is testing around that level right now, and this is right around the ‘swing high’ denoted on the below chart in orange. For traders looking to re-load on the long Dollar trade, this could be a pivotal level to watch as a gauge to evaluate when strength may be returning to the Greenback.

This sets the stage for what could be a fairly vigorous Non-Farm Payrolls report tomorrow. Rate expectations for a move in December are high, but the U.S. Dollar is weak. If tomorrow’s NFP report comes out well-above the expectation for 175k jobs to have been added to American payrolls in the month of October, we can see an aggressive return of the prior rally in the Greenback. The range of economist estimates for tomorrow’s NFP release is 105k-208k, so a strong beat of tomorrow’s expectation of 175k could catch many by surprise, and this could only further contribute to a top-side move should NFP beat.

And if we combine all of that with the potential for lower liquidity on the basis/fear around developments in U.S. Presidential elections of recent, and this can create a very pensive environment in which extremely sharp price moves could be seen if tomorrow’s number prints outside of the expected range.

On the chart below, we’re taking a longer-term view of the U.S. Dollar along with a fairly significant support zone that traders can watch for going into and around the release. 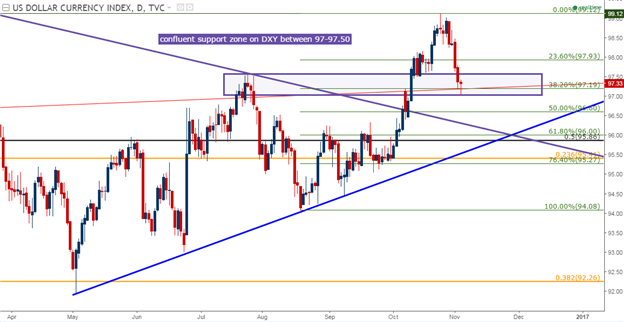 At the Bank of England’s Super Thursday batch of announcements this morning, the BoE raised inflation expectations for 2017 and 2018. This was pretty widely-expected and we’ve been discussing this for a while; as the ‘sharp repricing’ in the British Pound after the Brexit referendum was likely going to lead-in to inflation on imported products.

With the BoE moderating their dovish outlook for future monetary policy moves on the basis of rising inflationary pressures, traders finally had a reason to bid GBP above resistance levels. On the Cable, price action burst above prior swing-highs around 1.2325 and, as of this writing, is making a strong move towards the 1.2500 psychological level. 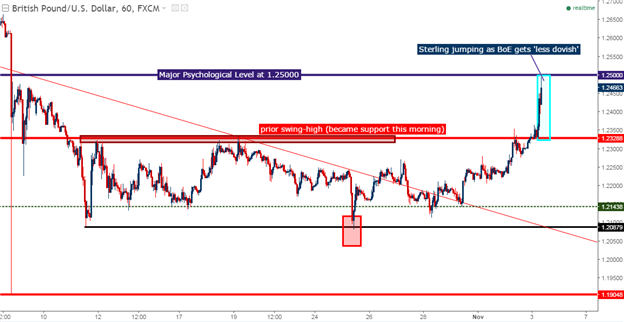 With the BoE making what could end up being a fairly significant shift in monetary policy expectations, this could end up being a theme that could stick around for a bit in GBP. But traders would likely want to take caution if looking to chase the move higher here, as NFP sitting on the calendar for less than 24 hours away can quickly change trends in anything USD-related.