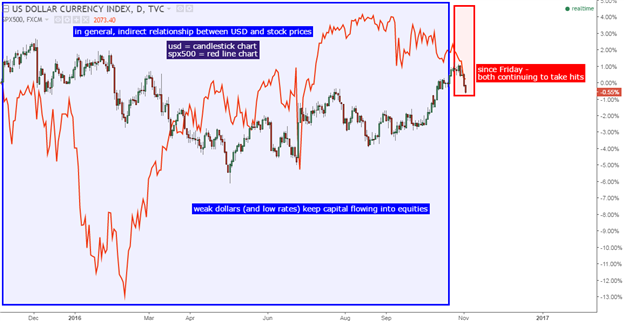 USD, Stocks Both Selling Off - Is This the World Adjusting for Trump?

- U.S. Assets are getting hit in tandem as the U.S. Dollar and U.S. stocks are both selling-off; raising the question whether or not this is a global market response to recent changes in the backdrop of the U.S. Presidential election race.

- Today’s Fed meeting is widely considered to be a no-move event; with the details of the Fed’s statement likely to be the center of the market’s attention. Is the Fed close to hiking in December? And if so, what factors might prevent that or make that more likely?

While much of October saw a screaming up-trend in the U.S. Dollar, November has already brought on an aggressive change of pace. In October, the Greenback remained bid for much of the month as numerous members of the Federal Reserve talked up the prospect of a rate hike at one of the two remaining meetings on the bank’s Calendar. And given that one of those meetings (taking place later today) was being held less than one week ahead of U.S. Presidential elections; logically there was really only one meeting that the Fed was talking about for a near-term rate hike, and that was/is December.

So today’s Federal Reserve meeting will probably be all about the details. Today’s meeting is ‘live’ but has no scheduled press conference. We’ll be receiving a statement from the bank at 2PM ET, and at that point, it’s off to the races as markets attempt to decipher what the Fed might be really trying to say. If you want some help reading the tea leaves, my colleague David Song wrote up a preview for today’s meeting with a specific eye on EUR/USD. On the chart below, we’re looking at this recent emergence of a direct relationship between the Greenback and U.S. stock prices, in which both are getting hit and moving lower.

With the Incursion of this new direct correlation – are we looking at a paradigm shift?

More recently numerous questions have arisen around the U.S. political landscape. While drama around Presidential nominees continues to dominate the headlines, many investors are beginning to ascribe this newfound bout of U.S. Dollar weakness to the recent revelation that the FBI has re-opened the investigation into Hillary Clinton’s emails. And if we combine USD weakness with the new 3.5 month low set in the S&P yesterday, we can certainly see some element of uniformity in negative price action on U.S. assets.

But is the S&P’s recent dip, and the U.S. Dollar’s slalom lower directly resultant of the FBI re-opening the investigation into Hillary Clinton’s emails, as some blanket statement from global markets against her opponent Donald Trump, as somewhat of a ‘sign of what is to come’ should the Republican front-runner become elected? Maybe: There simply isn’t enough information to definitively say that this is not yet the case; but more likely is that this recent reversal in U.S. stocks and the Greenback are coming from from some element of risk aversion and position squaring as a new, rather unquantifiable risk has risen in the environment. Perhaps this is a theme that can continue in which both the Dollar and the S&P sell-off, but more likely we’ll be looking at further declines in one or the other.

In the Post-Financial Collapse environment, the Federal Reserve has been able to use monetary policy to offset equity sell-offs; partially explaining why we’ve had but one single rate hike in the past nine years. This has helped to keep the U.S. Dollar incredibly weak (on a historical basis), and this also helped to drive additional capital into equity markets since rates were so incredibly low and opportunity costs for investment were abysmal. This encouraged investors to take on more risk than they would have otherwise: That was part of the design. This is also one of the major reasons why stocks have ran to significant new all-time highs in the past few years despite the questionable economic backdrop being seen in many of the world’s most major economies. We even saw such a scenario in June with the U.K. voted to leave the European Union in their Brexit referendum. For two days after the referendum, stocks got hit; but the Bank of England quickly started to prop the market with dovish commentary that brought life back to stocks until, eventually, we had even higher all-time-highs. 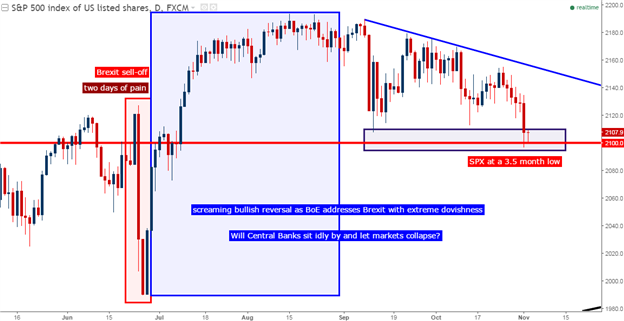 But with this newfound risk in U.S. Presidential elections – are we seeing a legitimate paradigm shift in which the Federal Reserve is, all of the sudden, expected to jerk rates higher even with calamitous price action in global and U.S. equities? Probably not. If markets sell-off on the back of a Donald Trump election, the Federal Reserve has the option of more monetary stimulus, much as Ms. Yellen indicated back in February of this year when she said the Fed would not take any stimulus options off of the table, including the possibility of negative rates.

Or, on the other hand, if markets do not collapse on the back of a Donald Trump election, the Fed can continue to slowly saunter their way higher on interest rates, much as they’ve attempted to do over the past couple of years.

So, while there might be a lot of emotion in many of the headlines that appear to be driving price action at the moment, traders will likely want to take a step back in order to simplify the context of the current environment. U.S. economic data remains middling, at best. The Federal Reserve has been extremely passive over the past nine years, and they’ve continued to personify that throughout 2016 as they’ve continually backed-away from hiking rates at each FOMC meeting.

So, in the big picture we’re likely looking at one of two scenarios should this current political theme continue to develop: Either the U.S. Dollar sells off as the Federal Reserve moves to dovish accommodation in response to perceived risks from a Donald Trump election (similar to how the BoE responded to the Brexit referendum, albeit in a much more tame manner without corporate bond purchases); or everything will end up being ‘ok’ and the Fed will go into December (or perhaps early next year) looking to hike rates.