- Next week’s economic calendar is loaded with Central Bank meetings and Non-Farm Payrolls on Friday. Below, we preview four of the more interesting CB-events.

- The week after brings U.S. Presidential elections, and this could further ramp volatility across-the-world.

-If you’re looking for trading ideas, check out our Trading Guides. They’re free-for-all and updated for Q4.

The next couple of weeks are going to be huge for global markets. Presidential elections sit on the calendar for the Tuesday after next, but before we get to that we have a plethora of economic data prints and rate decisions to get through; including a widely-watched meeting from the Federal Reserve in which markets will hope to get a better idea of just how hawkish the bank might be for their December rate decision.

The highlight of next week will likely be the bevy of Central Bank meetings and rate decisions, taking place each day Monday through Thursday. And once we get to Friday, we get Non-Farm Payrolls and Canadian employment numbers; and then the week after brings us the widely-awaited (and probably feared) U.S. Presidential elections. So buckle up – the next couple of weeks will see markets in a highly vulnerable state as the world wades through a series of pressure points.

Below, we take a look at the Central Bank meetings next week that are likely to garner the most attention.

The RBA probably isn’t going to be doing much anytime soon, likely not until at least early/mid 2017. Dr. Phillip Lowe has just taken over at the head of the Central Bank after his predecessor, Glenn Stevens, sat atop the bank for more than ten years. Last month was Mr. Lowe’s first rate decision with the RBA, and he struck a very balanced tone with an eye on the big picture. While many Central Banks are continuing to fret over lagging inflation, Dr. Lowe took a big picture view in explaining that the bank’s goal is the long-term average and keeping inflation anchored close to the bank’s 2-3% target; rather than working to get each and every inflationary print perfectly within the 2-3% range.

On a technical basis, AUD/USD has been fighting with a zone of resistance around the .7700-handle for the past 2.5-3 months while putting in lower-highs, and even the recent ramp of U.S. Dollar strength has been unable to break the pair below significant support. If price action next week can break below near-term support at .7450, then the big, confluent batch of support around the .7200-handle could become a very opportune target. 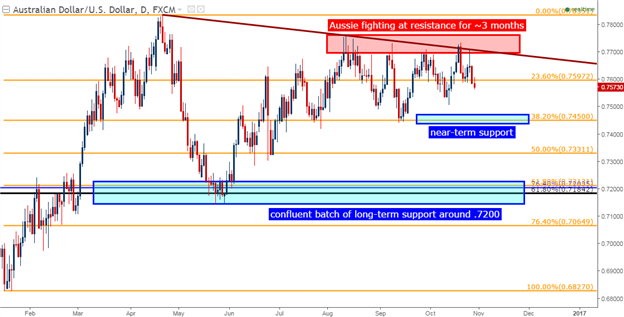 Bank of Japan on Monday Night (Tuesday morning in Japan)

Sometime after the RBA, but with no specifically scheduled time we have the Bank of Japan’s next rate decision. We discussed this one at-length in yesterday’s article, Yen, Sterling Price Action and Central Bank Inference.

The big question around the BoJ is what the bank might be looking to do with stimulus in the future, and at this point there are likely very few outside of the BoJ that have any legitimate idea of what options are on the table. At the bank’s most recent meeting in September, they announced that they were going to change the way that they’re conducting monetary stimulus in the future – targeting the yield of the 10-year Japanese Government Bond as opposed to a rigid outlay of bond purchases each month.

And while the initial reaction was one of disappointment, bringing on Yen strength, we’ve since seen the Yen weaken as markets have built-in the hope for more accommodation down-the-road. We likely won’t hear of any surprises from the BoJ next week as the whole ‘shock factor’ hasn’t worked out well for the bank since their surprising move to negative interest rates in January of this year. However, if we do hear BoJ Governor Kuroda discuss the possibility of more monetary stimulus or even a reduction in inflation expectations, and we can see a furthering of Yen weakness as markets anticipate another dovish move from the bank in the coming months.

On the chart below, we’re looking at USD/JPY as price action has moved up to fresh three-month highs. The 105.00-handle is an incredibly important psychological level in the pair, and could show up as short-term support. A bit below, we could see potential support around the 104.00-level, or perhaps a bit deeper at the Fibonacci retracement at 103.11. 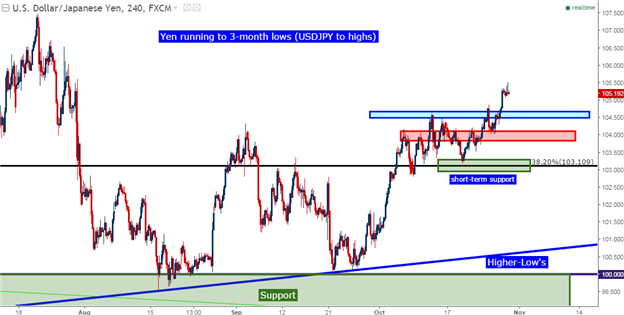 How hawkish will the Fed go? Again, expectations are minimal for any actual moves from the bank, but given that the Fed is one of the few global Central Banks that have even been talking about the prospect of tighter policy options ; this can expose the Dollar to a stronger top-side move should the Fed further cement expectations for a hike in December.

Also of pertinent interest for the U.S. Dollar is the fact that Non-Farm Payrolls are released two days later, on Friday. This could set up a potential ‘dip and rip’ type of situation should the Fed be more passive; at which point the Dollar could re-strengthen on a better-than-expected NFP print. On the chart below, we’re looking at four potential support zones in the U.S. Dollar for traders to watch next week. 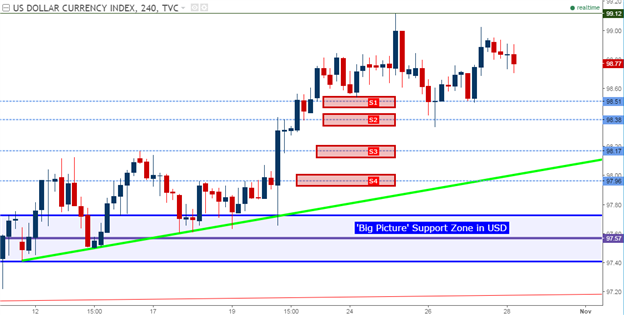 The Bank of England has been incredibly dovish in the post-Brexit environment. This has helped to further obliterate the British Pound and, frankly, there are few reasons for traders to want to buy here as the BoE has essentially implied that they’re going to be persistently dovish for the foreseeable future.

But this can all change very quickly should inflation begin creeping in more aggressively than what the BoE wants. And this Thursday, the Bank of England will release updated inflation projections at their ‘Super Thursday’ batch of announcements. The last ‘Super Thursday’ in August saw the bank launch a ‘bazooka’ of stimulus in the wake of the Brexit referendum. But since then, the ‘sharp repricing’ in the British Pound began to show side-effects with inflation in imports. And this is, basically, a mathematical issue. With a weaker British Pound, prices on imported products are likely to move higher as firms exporting to the U.K are likely not going to want to take a hit to their margins just because of a currency move.

The big question is whether the Bank of England is beginning to firm their inflation projections for the future, which could, eventually, move the BoE’s hand away from any future dovish moves. If we see the bank pivot, and this is a huge ‘if’ at this point, we might finally see the British Pound break the pain-chain that has been post-Brexit price action. 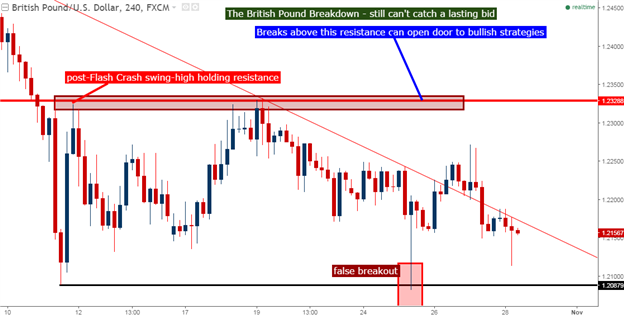