- Many major FX-pairs are primed for big moves in the coming months, as Central Banks in the U.K., Japan and the United States will all face mounting pressure around some very pertinent themes.

- In today’s article, we look at the Yen and the British Pound; but if you’d like more information around the U.S. Dollar, we had discussed the ‘big picture’ backdrop in the article, Dollar Softens to Support, is the Bullish Move Ready to Run?

-If you’re looking for trading ideas, check out our Trading Guides. They’re free-for-all and updated for Q4.

BoJ/Yen: Next week brings another Bank of Japan meeting and over the past few days, BoJ Governor Haruhiko Kuroda has been in the news with quite a few pieces of commentary. While none of these comments have been directly telling of any future stimulus plans, the market response has been fairly pervasive, albeit moderated Yen weakness.

Earlier in the year, The Prime Minister of Japan, Shinzo Abe, had said that a ‘comprehensive, bold economic stimulus package’ was coming this fall. Going into each BoJ meeting after that comment, markets sold the Yen in anticipation (or hope) of getting another increase in Japanese stimulus. But, throughout the summer the BoJ held the line with no additional announcements; and as we went into the September BoJ rate decision, the bank had said that they were going to perform a ‘comprehensive review’ of their stimulus efforts thus far. This gave the appearance that something was going to change; and this is when the BoJ announced that, rather than targeting the amount of bonds to be purchased every month with Quantitative Easing, they were going to target the interest rate of the 10-year Japanese Government Bond. This is a rather unique way of adding stimulus, and could potentially be opening the door for another increase to Japanese stimulus in the coming months as it affords the BoJ significant flexibility in instituting monetary policy.

The next BoJ meeting takes place on Halloween. The last BoJ meeting on Halloween (2014) saw the bank announce that they were going to buy stocks with QE, and this gave another major push of Yen-weakness and Nikkei strength as few were expecting such an aggressive move . And while the BoJ has built-in a penchant for surprises, like with their stealth move to negative rates earlier in the year; this may not be the time for the BoJ to go for ‘shock factor’ in markets, as the only ‘shocks’ that they’ve been able to produce of recent have been severely negative (like the move to negative rates). Also given that the BoJ is looking to institute a new form of monetary stimulus by targeting the 10-year JBG, which gives them considerable flexibility, and it makes more sense to caution towards ‘calm’ rather than ‘shock.’ 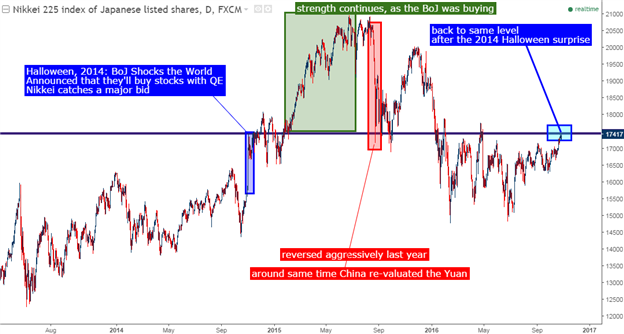 So, this upcoming BoJ meeting is unlikely to produce much as far as solid change as it comes fresh on the heels of an already big announcement. Expect rates to stay the same, expect policy to stay roughly the same, and the one modification that we might be looking for would be a reduction in inflation expectations. More interesting will be Mr. Kuroda’s comments on Yen strength/weakness, and how the bank might be looking to integrate stimulus or even ramp-up efforts in the coming months should the economic backdrop worsen. If, by chance, Mr. Kuroda discusses the possibility of fiscal and monetary policy integration, we could see significant Yen weakness thereafter. This would be a lower-probability expectation, but given that the bank is likely looking to avoid surprises, the range of possible options of what can be discussed is considerably more open.

For all of their efforts, it appears that the BoJ has finally arrested the runs that have dominated Yen price action for this year. USD/JPY spent three years rallying only to wipe away 50% of the move in approximately 6 months as it appeared that the BoJ might be running out of ammunition. Once the pair fell below the vaulted 100-psychological level on the heels of the Brexit vote, support began to build as expectations started to grow that the BoJ would inevitably do more. This led-in to 3 months of higher-lows until, eventually Dollar strength began to show prominently in October. 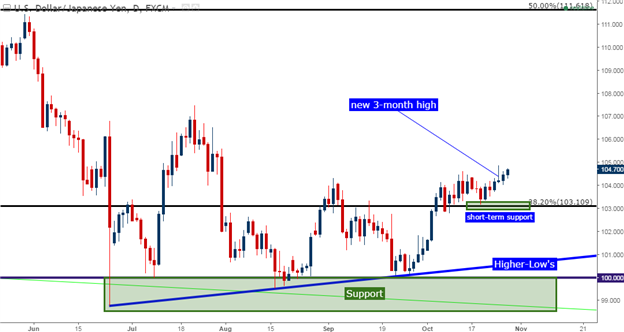 UK GDP Beats: British inflation came-in above expectations last week and this morning, U.K. data put in another strong read with Q3 GDP. While expectations have been driven-lower with fear around the Brexit referendum, British data continues to come in ‘ok,’ or at the very least not as glaringly bad as many have come to expect.

This highlights an awkward scenario in the British Pound. The Brexit referendum is a gigantic question mark, and there is no template for how this entire situation is going to resolve itself. Markets, however, have responded to this uncertainty with a brutal movement in Sterling, driving the currency to 30-year lows. But even those 30-year lows are rather questionable. The one historical instance that we have with the British Pound trading this weakly against the US Dollar was in 1985, and it only lasted for 3 months as GBP drove down to the low at 1.0520. But that was all resolved in March of 1985 with the Plaza Accord, and by the end of the month the British Pound was back up above 1.23. 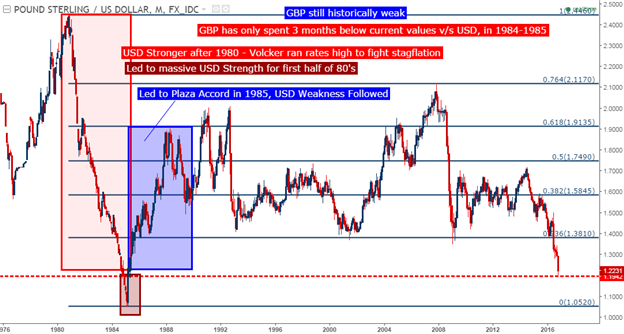 Does this mean that a reversal is imminent in the British Pound: Absolutely not, because nothing can ‘predict’ reversals. However, the recipe for an extended top-side move is there, particularly if British Politicians orchestrate a cautious approach around the Brexit discussions and the triggering of Article 50 (which is utterly unpredictable).

But, as we discussed yesterday, traders can use price action to see when/how/if markets are pricing in such a theme by waiting for fresh highs to print in order to indicate that bulls may be able to run. While the British Pound is extremely weak on the implied dovishness of the Bank of England, there isn’t much more room for them to add additional accommodation. They might be able to take rates down to 10 basis points, but what then? The bank is already heavily engaged with a bond buying program, and Mark Carney has previously talked-down the prospect of negative rates. And perhaps more enticing, the major hit that the British Pound has taken over the past few months is likely going to lead to even stronger inflation (at least on imported products, initially) and this can further force the BoE’s hand away from additional accommodation.

But, this is still a headline-driven market; which means logic can go right out of the window when a news report hits that suggests a higher probability of a ‘hard Brexit’ scenario. So, this is why we watch and utilize price action rather than trying to predict what tomorrow’s newspaper might say. 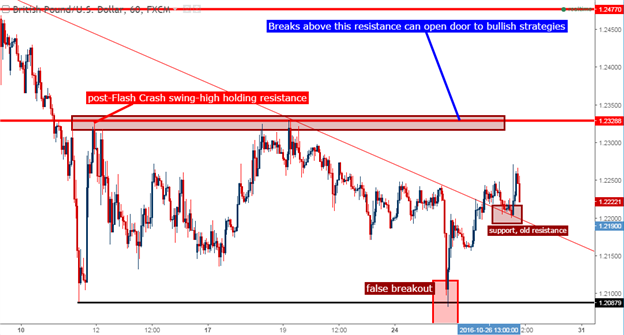