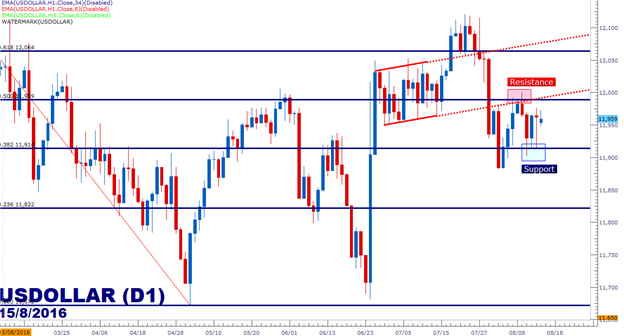 Will CPI, FOMC Minutes Provide Direction to a Meandering US Dollar?

- The U.S. Dollar is consolidating with a slightly-bearish near-term bias; but the release of inflation numbers tomorrow and FOMC Meeting Minutes on Wednesday may provide some element of direction.

- Gold prices have been tracking rate hike expectations fairly well of recent, with Gold moving into its own consolidation pattern in the month of July. If the US Dollar can find some form of strength this week, this could open the door to longer-term support in Gold prices (shown below).

Last week was noticeably quiet across markets, with ‘summer-trading’ lulls being seen through much of the week. This week picks up a bit on the data-front with the release of U.K. and U.S. CPI tomorrow morning, followed by Fed Minutes on Wednesday, Australian Employment on Thursday Morning (Wednesday night in New York) and Canadian CPI on Friday. Each of these prints could stoke expectations around future Central Bank moves, but traders are likely circling the calendar for the end of the month for that next ‘big’ batch of potential volatility with the Jackson Hole Summit on August 25th-27th.

One market that might find some semblance of direction this week with the data that we do get is the U.S. Dollar. Last week was particularly chaotic in the Greenback as price action bounced around previously-defined Fibonacci support and resistance, albeit with a slightly-bearish tint. The big miss on Retail Sales Numbers and Producer Prices on Friday had driven the Dollar lower to support in the 11,914 area; but a lack of follow-thru saw much of the move retrace by the close of last week’s trading, producing a fairly aggressive Doji on Friday.

The interesting aspect of this week’s data in pertinence to USD trends will likely be the delivery of the FOMC minutes from the bank’s July meeting; which somewhat furthers a bigger picture theme that’s been playing out over the past year around Fed rate hike expectations. April’s FOMC announcement saw the bank pose a slightly-less dovish statement than the month earlier, removing a key phrase alluding to the Fed monitoring ‘global risks.’ And this failed to inspire much Dollar strength as markets were passively expecting the Fed to stay relatively dovish. But the release of the Minutes from that meeting showed that the bank felt that markets were far underpricing the probability of a hike at their next meeting in June (this period is shown on the below chart with the blue box highlighting price action). This was noticeably more hawkish than what markets were expecting from the Fed, and this sent the U.S. Dollar higher until we got the abysmal NFP report on June 3rd that all but extinguished those fears/hopes/expectations around a near-term rate hike from the Fed. 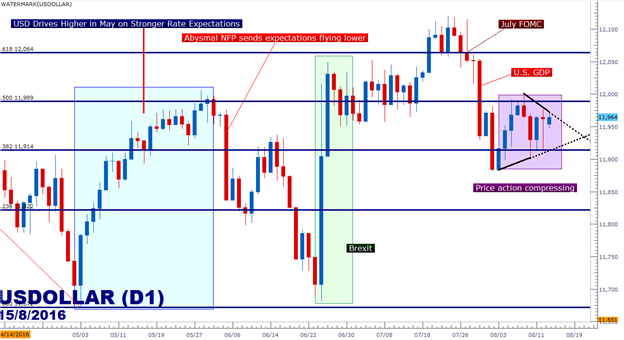 One market that’s been tracking USD fairly well and likely primed to move should the Greenback break-in to a new trend is Gold. Gold prices drove lower throughout that month of May as markets were pricing a stronger probability of near-term Fed moves; seeing Gold prices shed more than $100 throughout the month. But as that terrible NFP report in early June brought reversals into Dollar-trends, Gold set support and began flying higher again, catching a major bid around the Brexit referendum to send price action to ‘higher-highs.’ But throughout much of July that bullishness has moderated as price action has built-in to its own consolidation pattern in Gold prices.

If the FOMC minutes from the July meeting follow the pattern of those from the April meeting, seeing the bank’s slightly less-dovish statement echoed by the meeting minute’s slightly more-hawkish tone, this could send Gold prices down to longer-term, more well-tested support at $1,315, $1,300 or $1,285. This continued consolidation near resistance can be very attractive for longer-term strategies of traders looking to buy support of the ‘bigger picture’ up-trend.