- After two weeks of heavy data, markets get somewhat of a breather with a light schedule in the week ahead. But there are some very big macro questions to be answered in the U.S. Dollar, the Japanese Yen and Gold prices.

- While the next BoJ and FOMC meeting are more than a month away, given the importance of each and the fact that Central Banks remain as the ‘primary driver’ across global markets, fully expect markets to begin attempting to ‘price-in’ expected moves from both banks well ahead of the meetings.

After two rather pensive weeks of economic data, the week ahead presents a relatively light calendar in which there are only a couple of batches of ‘high impact’ data ahead of Friday’s European GDP and CPI numbers. The highlights of the early portion of the week are Chinese CPI set to be released later this evening, and then an RBNZ rate decision scheduled for Wednesday afternoon (Thursday morning in Asia). 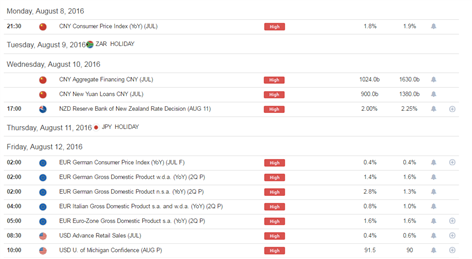 But given this lighter slate of data, there could be ample opportunity to evaluate price action in order to discern which trends or themes may have room to run and which may be deserving of a ‘fade’ in the not-too-distant future.

After Friday’s blowout NFP report, this has become one of the more pertinent themes across global financial markets. Many global Central Banks are in the process of embarking on policy that will weaken their currencies, such as the negative rate regimes (with the prospect of even more negative rates or even more stimulus) from Japan and Europe, or the recent increase in easing out of the Bank of England, or the near-constant efforts of adding liquidity in China. One of the few Central Banks not actively guiding policy to be even looser is the Federal Reserve. And while the Fed may not exactly be hawkish, and while we may not be getting a rate hike anytime soon, the simple fact that they aren’t as dovish as much of the rest of the world could continue to expose the US Dollar to capital flows as investors sell-out of other currencies while seeking safer harbors.

The US Dollar has seen considerable volatility of recent, with aggressive breaks lower last week on the back of an abysmal GDP report and then again after the Japanese Government Budget indicated far less fiscal stimulus than originally hoped last Tuesday. But after the release of NFP on Friday, the Dollar firmed up to resistance and has continued to show strength on the early portion of the week. As we open the week, USD is at an interesting level. The level of 11,989 is the 50% Fibonacci retracement of the January 2016 high to the May 2016 low, and just above current price action is a projected trend-line (shown in red) of prior support, now showing as near-term resistance.

Another market with considerable macro interest at the moment is the Japanese Yen. Earlier in July, hopes were high for a (another) bazooka of stimulus to be launched out Japan. This time, however, hopes were high for both a monetary bazooka and a fiscal bazooka of stimulus, with some even going so far as to expect the initiation of ‘helicopter money,’ which is a still very theoretical, untested concept. As a matter of fact, ‘helicopter money’ probably wouldn’t even be legal in Japan at this point, as the direct underwriting of government debt is currently prohibited by Japanese law.

When the Bank of Japan underwhelmed at their previous meeting, and then when the Japanese government budget released last Tuesday indicated far less fiscal stimulus than what many had hoped; we saw strong reversals in Yen-trends as investors sold out of stimulus bets.

But the bigger question here in regards to longer-term Yen trends would be: Is the Bank of Japan done trying to tackle deflationary forces with experimental monetary policy? Probably not; at this point most could probably consider that the Bank of Japan is ‘pot committed’ to the QE-efforts of the past (almost) four years.

And with another meeting in September, with the BoJ announcing their decision just 12-14 hours ahead of the next FOMC rate decision, and there is ample opportunity for a revival of Yen-weakness themes on the back of the anticipation for more stimulus; particularly if the US Dollar moves into a bullish pattern in the coming weeks.

Last week we had pointed out the confluent area of support in the ¥100.75-range of USD/JPY, with eyes on the parity level of ¥100.00 for longer-term, psychological support in the pair. Since then, that support has shown as a ‘higher-low,’ and on the early portion of the week we can see the Yen continuing to sell-off. Given a light calendar on the early portion of this week, traders can continue to watch the Yen to see if weakness continues to show on the back of investors attempting to anticipate ‘more easing’ at some point down-the-road.

Just a bit above current price action is a confluent level of potential resistance in the 103.10-103-15 area, with two different Fibonacci retracements as well as a projected trend-line. How prices react once this zone is reached could be telling for near-term trends. If buyers are able to punch price action above this resistance, then traders could re-assign this zone as support in the effort of catching a ‘higher-low’ in the continuation-move higher.

The burst of USD-strength to end last week helped to bring Gold prices lower. And as we had written in the weekly fundamental forecast for Gold prices, with no Fed speakers on the docket and with a light patch of economic data, we could see that theme of softness in Gold prices continuing into this week.

Longer-term, the top-side of Gold continues to be attractive. The one big theme that’s brought retracements in the Gold up-trend this year has been a hawkish Fed, or at the very least clues or hints that the Fed may move forward in a hawkish manner, similar to what happened in May of this year. But Central Banks are somewhat between a rock and a hard place, and as we alluded to in the above in regards to Japan, most are somewhat ‘pot committed’ to the strategy of trying to use monetary stimulus to fix fiscal problems. The Federal Reserve is no different.

Of the approximate 26% rip-higher in Gold prices this year, much of the gains have come-in around Central Bank meetings or announcements. This, of course, is when those monetary bazookas get aimed in new and fresh directions, and should this theme continue, Gold prices will likely continue moving-higher.

The big question is how hawkish the Fed might be after the two most recent months of blowout NFP numbers; or perhaps more to the point, how hawkish market participants might expect the Fed to move in response to this data. We’re speaking of the Fed Feedback Loop, and with recent employment data running stronger and with U.S. equity prices sitting near highs, we may not be too far away from the next iteration of the Fed talking up the prospect of higher rates out of the U.S. Gold prices will likely remain in the spotlight around this theme as we near the next FOMC meeting on September 20-21st.