Dollar Rips on Blowout NFP, but is this a Lasting Move?

- This morning’s NFP report came out well-above expectations, driving strength in the U.S. Dollar. But is this a lasting move? We look at two markets below for playing a) USD continuation (against Yen) or b) a USD reversal (in Gold).

- While the Federal Reserve may not be nearing a rate-hike anytime soon, the simple fact that they’re not as dovish as much of the rest of the world could expose USD to continued capital flows.

U.S Non-Farm Payroll Numbers for the month of July were released this morning, and just as we saw last month the print came-in far above expectations. The expectation for July NFP was for +175k jobs to have been added to American payrolls, and the print came in at +255k; similar to last month’s print of +287k versus the expectation of +180k. And speaking of last month, the June NFP print was revised higher this morning to +292k, so job growth in the United States over the past two months has been incredibly robust.

This has created USD strength in many FX-pairs, and fresh on the heels of the Bank of England’s massive increase to stimulus rolled out at yesterday’s meeting, this raises the prospect of continued divergence in currency trends as we approach the Federal Reserve’s next rate decision in September. With much of world seeing dovish policy, increased stimulus and assurances of more Central Bank support, the fact that some U.S. data remains strong could continue to provide strength into the U.S. Dollar. Even if no rate hike is actually coming in September or even December, the fact that the Fed has this on the table and is not actively looking to loosen policy could expose the U.S. Dollar as one of the few currencies with the prospect of continued strength, driven by expectations around monetary policy by the representative Central Bank. On the chart below, we’re looking at the top-side burst in the Greenback on the heels of this morning’s announcement: 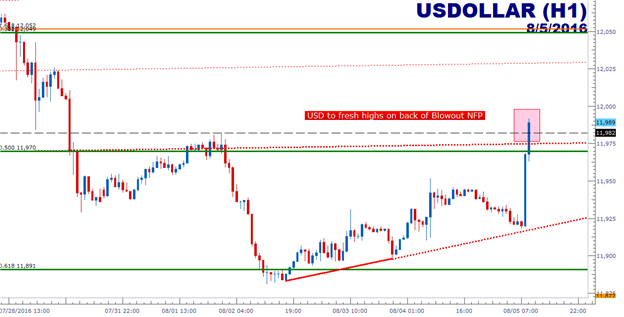 On the topic of monetary policy divergence, one of the more interesting macro markets at the moment is in USD/JPY. The Yen strengthened massively after the Bank of Japan underwhelmed at their most recent rate decision, and then furthered the move as the Japanese Government Budget indicated far less fiscal stimulus than was originally hoped. But the BoJ also has another meeting in September (with announcement of their decision just ahead of the Fed’s next rate decision), and they likely aren’t done with their attempts to tweak monetary policy to try to attain their goal of 2% inflation. We discussed USD/JPY earlier in the week, and we drew attention to the confluent support level in the ¥100.75 area on the chart. That support has held, at least for now, and this morning’s USD-strength drive has created a new short-term high in the pair. For those looking to play policy divergence, this could remain an attractive market to keep an eye on.

Should USD strength remain, this could be one of the more attractive themes to work with on the prospect of continued monetary divergence (U.S. doing nothing, Japan going more dovish). 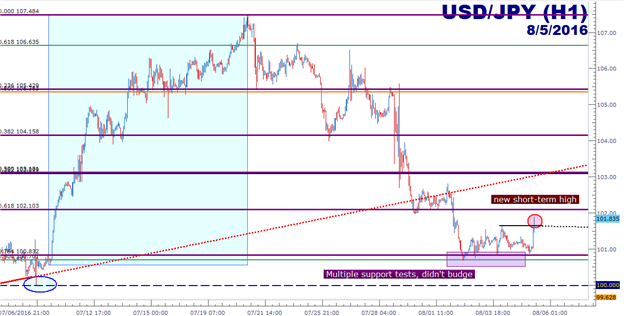 Another market of considerable volatility on the back of this morning’s NFP print has been Gold. Gold prices have remained extremely strong as the Fed has continued to shuffle-back rate expectations deeper and deeper into the year. Each dovish move from the Fed has brought another top-side burst to Gold prices. Last Friday’s GDP disappointment helped to further firm Gold prices and that move continued into the early portion of this week.

As the Dollar strengthened this morning, the up-trend in Gold has taken-in a strong retracement. And as we see USD strength around Fed expectations (which, deductively is hawkish considering the dovish stances in Japan, Europe, the U.K., and China), this could further dent Gold prices until, eventually, the Fed brings more dovish commentary to markets. This is referring to the Fed Feedback Loop, and this is why trading in Gold has been so tenuous this year. The trend-side moves higher have been quick and violent, so timing of entry is of extreme importance, as buying near a high could entail weeks of grind against the position before the trend-side move may continue.

The current dent in Gold prices could become a buying opportunity for those looking to fade this USD-strength. This would be based under the presumption that the Fed likely isn’t going to hike unless absolutely necessary, despite any clues or commentary or Fed-speak that indicates otherwise.

On the chart below, we’re looking at some potential levels of interest on Gold in the effort of such an approach. 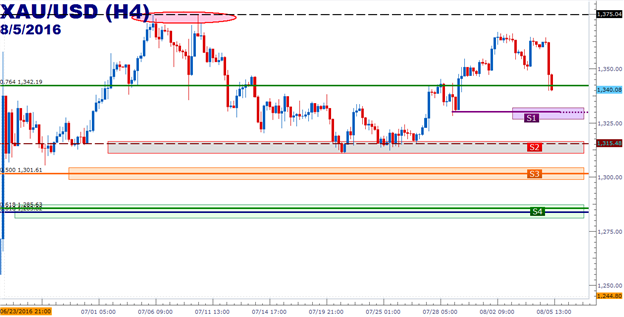