- Equities are still holding on to longer-term bullish formations, and given the prospect for continued Central Bank support, traders may want to look at these recent dips as the prospect of ‘higher-lows’ rather than a ‘major turn.’

The past couple of days have seen pressures growing in global equity markets, as the Central Bank stimulus that was previously-hoped would buoy equity prices has, at least thus far, been weaker than what many investors were looking for. Japan’s had two disappointments over the past week after last week’s BoJ announcement didn’t bring the monetary ‘bazooka’ that many were hoping for; and then again this week when the Japanese budget indicated a far smaller fiscal stimulus package than what was expected. And then this morning in China, a key phrase was removed from a statement coming from China’s top economic planner, the National Reform and Development Commission (NDRC). Initially, the NDRC’s statement called for interest rate and reserve requirement cuts from China in order to stimulate the economy. But those phrases were later removed after the statement’s release, and this has stoked fears that perhaps the Chinese government won’t be bringing that additional run of monetary stimulus that many had come to expect.

The lack of follow-thru on these hopes for looser monetary policy has seen stimulus bets getting priced-out of the market, and this has contributed to the rise of bearish price action. Below, we look at some of the larger global bourses to see when, how and where a turn might take place, if at all in our current context.

This is one of the areas that’s been hit the hardest, and this is shortly after the Nikkei had become one of the more bullish global equity markets as hopes for that enhanced stimulus package out of Japan ran high. After Shinzo Abe’s coalition won a super-majority in the upper-house of parliament, investors loaded into global equities on the prospect of Japanese stimulus being ramped up, with some expectations even going so far as to expect an appearance of the heavily-debated, never-tested concept of ‘helicopter money.’ When this didn’t happen at the July meeting, investors sold out of the Nikkei and then when the Japanese budget was released, showing less fiscal stimulus than what was originally hoped, the declines deepened.

But does this rule out the prospect of more monetary stimulus out of Japan? Probably not. The next BoJ meeting is on September 20-21st, and given the fact that the BoJ’s decision set appears to be binary between the options of ‘more stimulus’ or ‘do nothing,’ with the consequences of ‘do nothing’ fairly burned into the minds of Japanese rate-setters, it would be surprising to see the bank not make any additional moves.

On the chart below we’re looking at price action in the Nikkei, and notice the higher-low that developed around Non-Farm Payrolls in early July, above the previous low set during the Brexit referendum. This could have the makings of a longer-term bullish structure, with potential support levels sitting around 15,800 and again around 15,616. 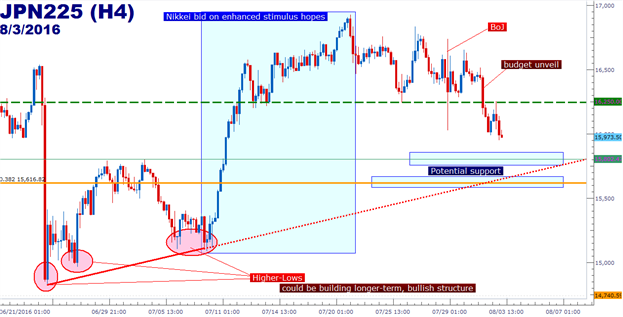 Another market that staged a brisk post-Brexit recovery was the German DAX. After failing to break the April swing-high earlier this week, the DAX has seen bearish price action move down to support at a fairly interesting level. At the level of 10,109.55 we have the 38.2% Fibonacci retracement of the all-time high set in April of 2015 down to the lows of this February. This is also prior price action resistance, and is now showing as support. So, this is bullish price action until that changes and until lower near-term lows begin to print below support. The psychological level at 10,000 could be used to help determine stance, with traders taking a bullish perspective until that level is breeched again. 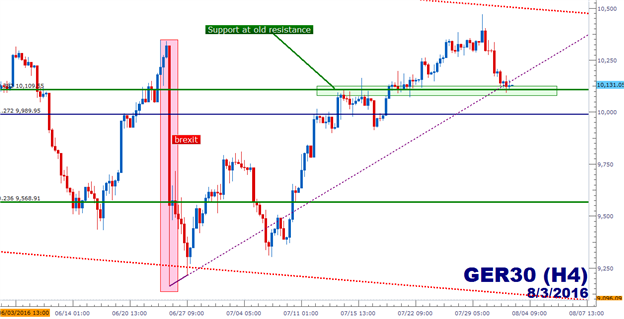 Longer-term, the DAX is still trading within a bearish channel over the last 17 months. Should price action bounce off of support, traders would likely want to take this projected channel into consideration for near-term profit targets. 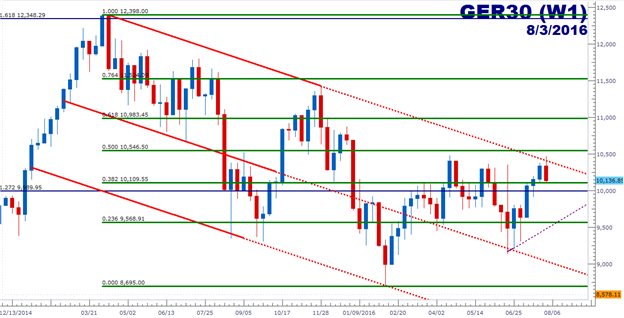 Many have been watching sell-offs in the U.S. for clues of potential risk aversion, but equities out of the U.S. are still holding on to longer-term bullish formations, with the SPX near all-time highs, the Nasdaq just a little more than 100 points from setting a new all-time high (with the potential to finally overtake the previous all-time-high set during the tech boom).

On the 4-hour chart below, we’re looking at near-term price action in the SPX500. And after setting another new all-time high earlier in July, price action had begun to build-in a range leading-in to FOMC. And after a quick false breakout, price action has turned lower, breaking below near-term support. But just a little lower are two longer-term levels that could be interesting for bigger-picture support inflections. At 2,137.10 we have the prior all-time high that had held for over a year, and just a bit above that at 2,138.54 we have the 61.8% extension of the Financial Collapse move. Should the short-term wedge break lower (shown in black on the below chart), traders can look for support to develop in this region. 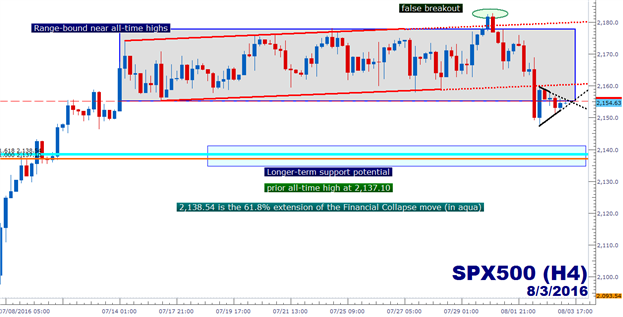