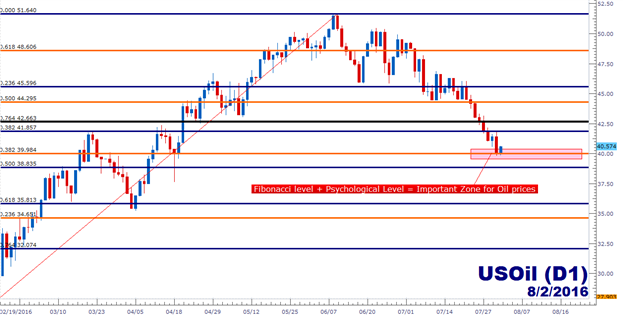 Oil Becomes a Bear as the Yen Stages Another Surge

- Oil prices have taken a drubbing over the past couple of months, with an aggressive hastening of the declines over the past week. Oil prices below $41.31/brl denote a technical bear market with a > 20% fall from the high of $51.64.

- The Yen is continuing to surge as hopes of a ‘bazooka’ of fiscal and monetary stimulus have seemingly fallen flat so far. But Japan is not likely done on the stimulus front, and we’ll likely hear more about that at the BoJ’s next meeting in September.

Oil falls below $40/brl for first time since April: Oil prices are in the midst of some aggressive declines over the past couple of months, as the high set in early June just above $51.50 has led into near-constant lower-lows and lower-highs. As Oil moves below the psychological $40-level, traders can classify Oil prices as being in a ‘technical bear market’ as prices had dropped by more than 20% from their highs. And over the past week those declines have hastened, with Oil prices have broken through some previously strong support levels, beginning to raise concerns around whether we’re headed for another redux of the beginning of the year when massive drops in Oil prices triggered a litany of related-concerns.

One such concern was European Banks that are exposed to falling Oil prices. We had discussed this theme back in March in the article, The Looming Boom of Energy Debt, and we warned that this likely wasn’t the last that we’d be hearing of that risk. For a beleaguered European banking sector that’s already been hit by years of low rates compressing profit margins on lending activities, taking a hit on energy investments can create considerable pressure at a very inopportune time. Despite the European Central Bank’s recent modification to their stimulus package to assist banks by rebating negative rate loans, little has been done to spurn actual demand for loans; and this remains a significant problem for the entire European economy. So while the various issues are behind the lackluster growth in the European economy, the threat of falling oil prices could exacerbate those concerns while exposing some of the weaker, less-capitalized constituents of the sector.

On the chart below we’re looking at the recent deluge in Oil prices along with a couple of interesting Fibonacci studies that have appeared to offer near-term support and resistance levels. Yesterday saw resistance come-in at $41.85, which is the 38.2% retracement of the recovery move, taking the February low up to the June high (shown in blue on the below chart). And after that resistance showed-up, Oil prices put in an aggressive drop, finding support over the past two days at the 38.2% retracement of the longer-term down-trend, taking the June 2015 high of $62.56 down to the February low of $26.03 (shown in orange on the chart below).

The Yen is surging after a disappointing sign on the Fiscal Front: Hopes have been high for another ‘bazooka’ of stimulus for the Japanese economy, and after Shinzo Abe’s coalition win of a super-majority in the upper-house of parliament, this seemed to be a fairly strong probability. And this led-in to about 10 days of Yen weakness on the hope for more stimulus coming later in the year, buttressed by assurances from Mr. Abe himself that a ‘comprehensive, bold economic stimulus program’ would be coming this fall. Mr. Abe even mentioned a number last week for this potential fiscal stimulus plan, mentioning a ¥28 Trillion number in a speech last week. But in the details of the Japanese government budget last night, only an additional ¥4.6 Trillion Yen showed up for this year, and the near-immediate response was fear that Japan may be nearing the end of their stimulus fire-power. 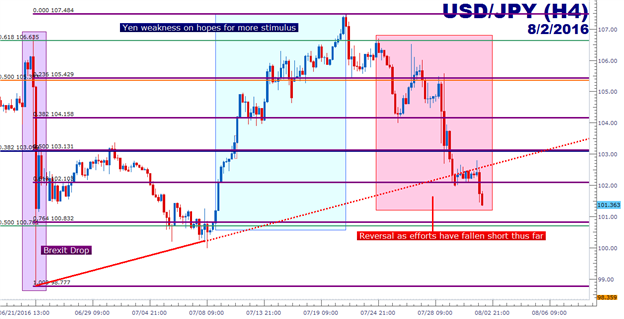 After the Bank of Japan made little change to their stimulus program last week (increasing ETF purchases, but falling short of the monetary stimulus many were looking for), investors began to fade the recent move of Yen weakness. And last night this hastened this drive as investors sold-out of short bets on the Yen. But this does not mean that we’ve heard the last of Japan’s attempt to turn-around the decades-long deflation that’s ravaged the Japanese economy. More likely, we’ll be looking towards the BoJ’s next meeting in September for that next announcement of a ‘big’ monetary action.

As for chasing the move lower, traders would likely want to exercise caution here, as we’re approaching some support levels that have displayed considerable strength in the recent past. The psychological level of ¥100 in USD/JPY is especially interesting, as this is something that, if crossed, will likely get the attention of the Bank of Japan and the Ministry of Finance. And in the ¥100.75-neighborhood are two Fibonacci support levels that could help to show a higher-low above that prior swing around 100.