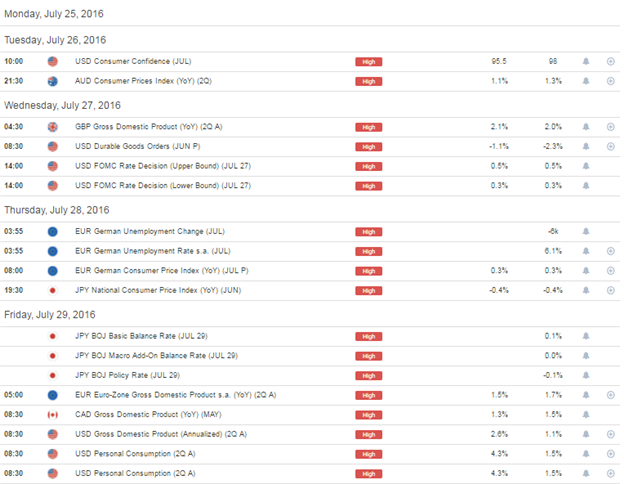 Price Action Preview: Another Week for the Central Banks

- This week is brisk on the data front, with high-impact announcements for each day of the week after Monday. The highlights will likely be Central Banks, with FOMC on Wednesday, BOJ on Friday and ECB Stress-Tests later on Friday.

- The U.S. Dollar continues in its bullish pattern and Oil prices have continued to show softness. This may cause the Fed to temper hawkishness this week, but with stock prices nearing all-time highs, the bank will likely avoid inserting any additional dovishness. Attention will probably be quickly averted to the next Fed meeting in September.

This week is chocked full of economic data reports, but the highlights will likely be derived from the news taking place around three major Central Bank announcements. On Wednesday, we hear from the Federal Reserve and on Friday morning, we hear from the BOJ with over 75% of analysts-polled expecting an expansion of the bank’s bond buying program. And later on Friday morning we get the results of the ECB’s most recent stress-tests on European banks, and with the huge amount of focus going into the health of European banks of recent, particularly in Italy, these stress-tests could be market moving.

In this article, we’re going to look at three of the more interesting themes in global markets as we approach this bevy of data points, focusing on areas that are primed for volatility around this week’s economic calendar.

High-Importance Announcements on the DailyFX Economic Calendar for the Week of July 25th, 2016

USD Strength And Will the Fed Go Hawkish?

We discussed this theme at length last week just after the U.S. Dollar posed another bullish breakout. In the article entitled, Will the Fed Feedback Loop See the Bank Take Another Hawkish Tilt, we encountered the premise of the Federal Reserve modifying outlook for rate moves based on stock prices. As stock prices surge, the Fed has shown a tendency to get hawkish and talk up rate hikes; while stock prices sagging have brought on dovishness and passivity towards rate hikes. We’ve already seen a few iterations of this theme over the past year, and with the S&P 500 back up to fresh all-time highs, the opportunity is there for the Fed to talk up rate hikes, again.

To be sure, there is little expectation for any actual rate moves on Wednesday. The likely drivers will be in the details; whether the Fed mentions strength in the labor markets (hawkish) or whether they’re in a ‘wait-and-see approach’ (dovish).

If the Fed does go hawkish, we’ll likely see a continuation of the recent top-side breakout. The Fed is likely well-aware of this recent bullish move in the greenback and in the past have mentioned the risk of a strong-USD becoming a headwind to growth. And given the fact that many other Central Banks have been rather open with their dovishness, with the BOE mentioning the probability of upcoming rate cuts while Japan is expected to increase their bond buying program, the Fed is likely looking at a future in which capital flows are streaming into the US Dollar; so even if the Fed does want to take a hawkish stance, they may not be very implicit about it, instead drawing attention towards their next meeting in September.

Will the BOJ Increase Stimulus Now or Later?

The past couple of weeks have seen quite the change-of-pace for Japanese markets, as a win by Shinzo Abe’s coalition in the upper-house of Japanese Parliament has offered a super-majority that should enable the passing of constitutional reforms for the country, while also lessening political resistance that Abe may face when embarking on new and larger stimulus programs. After those elections, we’ve seen global markets continuing to sell the Yen while bidding Japanese stocks higher, giving the apparent expectation that markets are attempting to front-run the next announcement of Japanese stimulus.

The big question, at this point, is whether we hear of that announcement now or later in the year. After past BOJ actions of buying stocks with QE and then moving to negative rates have seemingly blown-up on the bank, it might make sense to wait to make that next announcement of monetary stimulus. Also, one must take into account the BOJ’s penchant for surprises, and with over 75% of analysts being polled expecting an increase at this meeting, we may see Kuroda take a back seat, temporarily, to see what Abe’s coalition might have to offer on the fiscal stimulus front.

So while more BOJ accommodation is likely on the way, it may not be until their next meeting in September, just ahead of the next Federal Reserve meeting on September 21st. 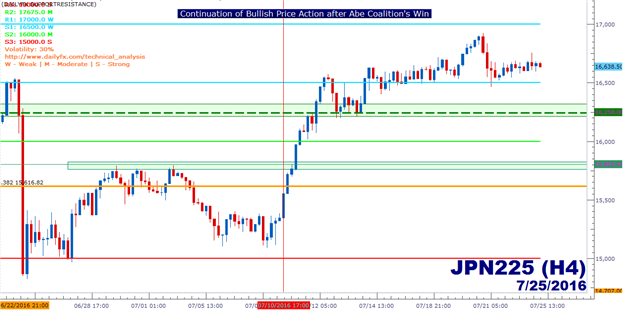 Is Oil Going to Become a Concern Again?

One of the most threatening aspects of the price action in the early portion of the year was the declines being seen in Oil prices. And with the increased exposure to Oil prices in the American economy on the back of the ‘shale revolution,’ sagging energy prices brought upon fresh risks for U.S. and European banks. And while many questioned the correlation between stock prices and oil prices at the time, the likely pain factor could be drawn back to banks. As rates stayed at record-lows, investors had to search far-and-wide to get yield. As oil prices had stayed in a relatively stable up-trend, driving investment towards Oil and energy extraction seemed to be a sound strategy. But eventually, the world was awash in Oil and prices declined massively. And as those declines came-in and as extractors felt the pinch to their margins, the exposure that banks had taken on to lend money to such outfits became a threatening concern. We discussed this in the article, US Oil and the Velocity of Contraction: The Looming Boom of Energy Debt.

Disaster was averted in Q1 as Oil prices staged a dramatic resurgence after Chair Yellen’s Congressional testimony on February 11th; and that strength has continued all the way into mid-June. But more recently, Oil prices have been dropping again. The monthly chart, as of right now, is showing an evening star bearish reversal pattern (not yet confirmed until the end of the month). Also of note, we’re less than $1 away from a critical support level at $42.66. This is the 76.4% retracement (23.6% remaining) of the ‘big picture move’ in Oil prices, taking the low from the year 1999 to the highs in 2008. This level had provided the price action swing-low during the Financial Collapse. 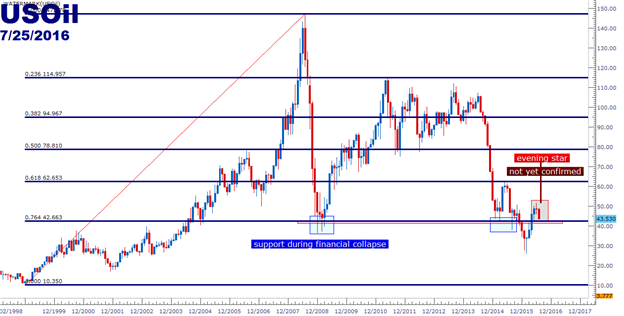