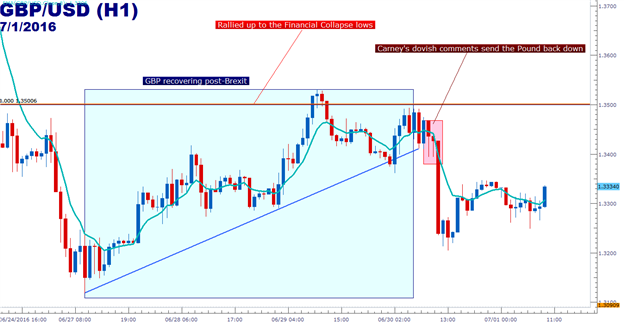 Three of the Most Pressing Themes for Global Markets in Q3

- Today marks the beginning of the third quarter of 2016, and it’s already been an eventful year. Today, we look at three of the more pressing themes for global markets as we move into the fresh quarter.

- While Brexit discussions may continue to dominate the headlines, it’s not likely that we’ll see Article 50 triggered anytime soon. But the threat of Brexit/populism/political volatility could still dominate major market themes, and we touch on those below.

Global markets have had a very interesting first half of the year. After shuttering lower through the first six weeks, price action staged a brisk turn-around in February and throughout March as Global Central Banks, once again, came-in to support markets at the first sign of distress in stock prices.

The second quarter saw many equity markets beginning to stabilize as selling pressure was offset by the threat of being on the wrong side of a trade against a major Central Bank. But we’ve also seen bonds continuing to rally, with many government issues setting even lower all-time lows in yields. This is a sign of risk aversion as investors accept abysmal yields simply for the security of storing their money in a government issue; and the fact that both stocks and bonds are continuing to show strength highlights the fact that we’re likely not at the end of the Central-Bank driven equity trade.

Below, we go over three of the biggest and most pressing themes facing capital markets as we wade into Q3.

1) Are we on the verge of another Central Bank liquidity drive?

With yesterday’s news this has already begun to show more prominently: The European Central Bank announced that they were going to loosen the standards of their bond buying program in order to buy even more bonds, and just one week after the Brexit referendum, Bank of England Governor Mark Carney held a press conference to announce that the BoE was considering an interest rate cut at some point this summer. At the Bank of England’s Super Thursday two months ago, Mr. Carney said that a vote to leave the European Union would likely entail higher unemployment, higher inflation, slower growth and a ‘sharp repricing’ in the value of the British Pound.

On the heels of the Brexit referendum the British Pound took a drubbing, but recovered leading into yesterday. After Mr. Carney’s comments, GBP went right back down and British Government Bonds rallied to fresh highs with even lower yields, while U.K. stocks set a fresh 10-month high.

The fact that we saw these comments coming from major Central Banks so quickly after Brexit highlights the fact that we’re not likely going to see Central Banks changing their tune of looking to offset capital market weakness with even more loose and dovish monetary policy. The big question is how much deeper this might extend into Q3; and then averting the focus for a moment, how the Federal Reserve might move their forecasts and expectations in response to this additional weakness? We discussed how the Federal Reserve may play into this theme in Q3 in yesterday’s Market Talk entitled, As We Enter Q3, the Spotlight is Back on the Fed.

2) Are global banks going to continue diving lower, and what might actually quell the down-trends?

Low rates can be really helpful for an economy: It allows businesses to borrow more cheaply; it makes the prospect of investments more attractive (since the cost of capital is lower), and it encourages investors to take on more risk given this more accommodating operating environment. This is why for such a long time, the prospect of a rate cut brought such a stimulatory effect into equity markets: lower rates are like a gift for businesses.

However, there is one very important business line that doesn’t appreciate low rates: Banks. The business of a bank is fairly simple, as their primary operation is to simply play the spread. They borrow funds cheaply (by paying lower rates of interest), and loan those same funds out at a higher rate, pocketing the differential for taking on the risk of lending.

In a normal environment, this is great; because the bank simply needs to manage their risk (who they are lending to) in order to continue pocketing the spread. Sure, there are always going to be *some* people that don’t pay (non-performing loans), but as long as the economy continues growing, investors continue to take out loans, and businesses continue investing, these non-performing loans can be offset by the spread being made from other borrowers.

But sometimes this isn’t the case, such as 2008. During the Financial Collapse so many people stopped paying their mortgages that not only could non-performing loans not be offset, but the veracity of the losses ate into many banks’ capital; in some cases eclipsing the amount that they had in the bank (Lehman).

In response to the Financial Collapse, global Central Banks jerked rates lower to make the economic environment as accommodating as possible; and this helped to avoid a full-scale economic depression as cheap capital enabled investors to continue investing despite the significantly more bearish back-drop. And banks were helped by QE as they were essentially given fresh capital in place of bad investments so that they could continue loaning out funds despite the hit that they were taking on the deteriorating value of their mortgage-backed securities.

But QE is not a panacea: This simply addresses supply of loans in an economy, and makes no positive impact to actual demand; and this is likely one of the big reasons that the global economy continues to hobble along despite the seven-plus years of record-low rates that have been seen around the world. This has taken its toll on many banks, especially those out of Europe, and the only real response from Central Banks has seemed to be even more stimulus and even lower rates. This has brought an out-sized hit to many banks' stock prices because even with this more accommodating operating environment, there simply isn’t the economic activity to allow them to continue pocketing an attractive spread.

The past seven years of low rates with a hastening of Central Bank activity out of Europe over the last year has put many European Banks in a very rough position; exposing some very large risks to the Global Financial system. We had previously looked at these themes when we discussed Italian banks back in January, and European banks later in March as additional pressure was being seen from the dramatic drop in Oil prices.

On the chart below, we’re comparing some of the world’s largest banks with significant European exposure to the S&P 500 (in red). (To see each individual ticker symbol in the legend, please click on the below chart to view a larger image) 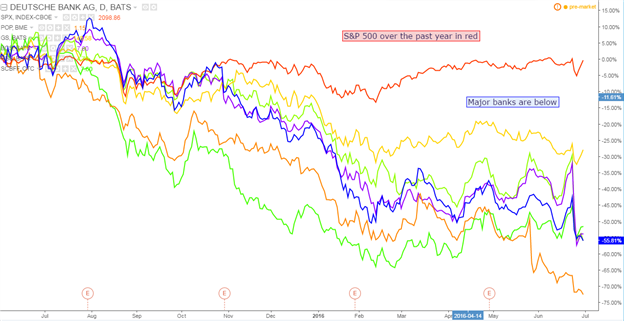 This was a very pressing theme in Q1, but seems to have sunk below the headlines as much of the world’s attention has been focused on politics and economic issues out of Europe in Q2.

On August 11th of last year China posed a stark re-valuation of the Yuan. This freaked global markets out because while the slowdown in China was already well-known at this point, the corresponding response was still very much a question. But when Chinese regulators slammed the Yuan lower, the fear was that China would attempt to devalue their way out of this bout of weakness, and that meant the prospect of significant capital flows gushing into currencies represented by Central Banks that did not want that additional strength.

Key of which was Japan, which even went as far as invoking negative rates at their January BOJ meeting in an apparent pre-emptive move towards stemming capital flows and Yen strength. This didn’t work. As a matter of fact, the Bank of Japan probably got the exact opposite of what they were hoping for as the Yen has only continued to strengthen since that move to negative rates, and this has brought even more pain to Japanese equities as the Nikkei has continued to dive lower.

But while much of the world was focused squarely on Europe during Q2 with a huge emphasis being placed on the U.K., a much larger economy to the East was weakening the Yuan in a significant way. During the quarter the Yuan put in a fairly consistent drop against the US Dollar. This helps China as it makes exports cheaper; but adds pressure on their global trading partners. The big question here is whether this Yuan weakness can continue, and if not, can China continue to avoid the flurry of risks facing their economy while seeing Yuan strength? 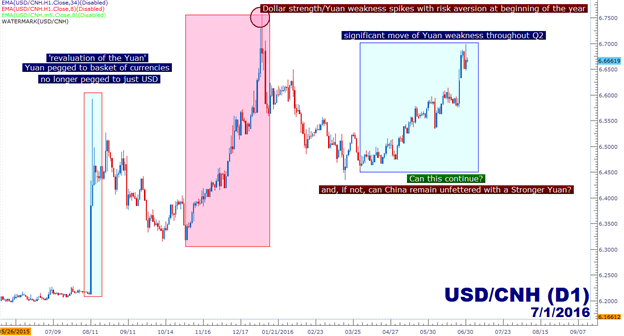