As We Enter Q3, the Spotlight is Back on the Fed

- Today marks the end of Q2 and the end of the first half of 2016. It’s been an interesting six months, and today we focus-in on one of the biggest motivators across global markets: U.S. Rate Hike Policy.

- U.S. Markets are closed on Monday in observance of Independence Day, and this may spell a low-liquidity environment tomorrow and around the weekend. Traders should continue to exercise caution.

Also of note, this weekend is a holiday in the United States with the 4th of July being observed on Monday. We’re likely going to see some skeleton crews on Wall Street as many usually take long holiday weekends to enjoy the summer around holidays. Even this morning public transportation in New York City was slightly less-crowded than usual, and this will probably be even more pronounced tomorrow. This is relevant for traders because this could mean lower levels of liquidity tomorrow and on Monday, and given the potential for increases in volatility around the end of Q2, this could make for a messy environment.

So, despite the fact that many risk trends have appeared to return, with the FTSE100 moving back above its Pre-Brexit levels; traders need to continue to exercise caution. As we enter the third quarter of this year, there are some very big questions to be answered in Financial Markets, and below we look at one of the most pertinent.

The US Dollar and Where is the Fed on Rate Hike Expectations? 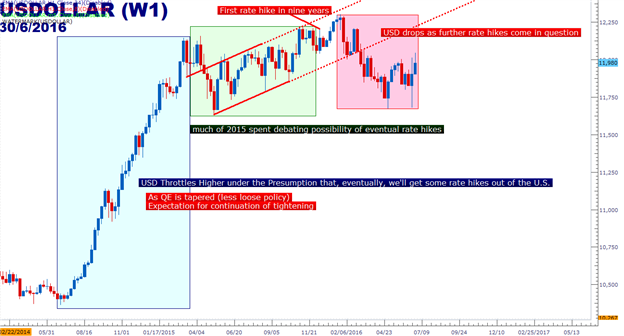 I’ve listed this as the first theme because over the past two quarters, this is what appears to have been one of the main drivers for risk trends. As we came into the Q1 just two weeks after the first rate hike in over nine years, the Federal Reserve was expecting to hike rates a full four times in 2016. Markets didn’t like that at all; and within hours of the first trading day of 2016, the world expressed some very grave concerns by selling pretty much anything that wasn’t nailed down (or that wasn’t a government bond being back-stopped by a Central Bank).

The risk aversion was so severe in January that we even saw the Bank of Japan make a quick and surprising move to a negative rate policy. This only seemed to make matters worse as this surprise move took global markets by surprise: If the Bank of Japan is so worried about continued Yen strength on the back of risk aversion, what else is it that they see that global markets may not have at the time to make such an extreme move?

The selling continued all the way to February 11th, or the second day of Chair Yellen’s Humphrey Hawkins testimony. On the first day of that report, Chair Yellen questioned the legality of negative rates. This raised the fear that the Fed might be running out of tools to respond to a Financial Crisis; and markets continued their brisk sell-off. But on the second day of this testimony, Chair Yellen said that the Fed wasn’t taking any options ‘off-the-table,’ including negative rates. This was the support that markets were apparently looking for as a significant low was set in many markets, including Oil and across many equity indices. 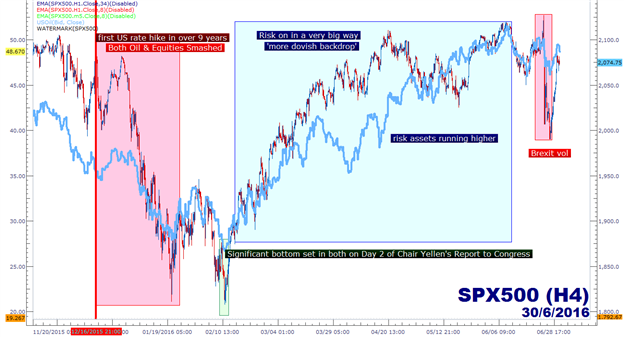 The March FOMC meeting saw a continuation of this dovish stance as the Federal Reserve dropped their expectation to two hikes in 2016 from the previous four; and this only served to extend those ‘risk-on’ rallies as it became even more apparent that the Fed would likely not be hiking so aggressively in the face of this flurry of global risks.

This move of USD-weakness and equity strength played through the end of Q1 and throughout April; but during May the Fed spent much of the month attempting to anchor rate expectations back up. The minutes from the April FOMC meeting even went so far as to say that the bank felt that markets were underpricing the probability of a hike in June. This created a considerable reversal in the US Dollar as traders reversed a portion of their earlier expectation for a more-dovish Fed. And that was again reversed as we came into June after an abysmal Non-Farm Payrolls report furthered a trend of recent softness being seen in the US Labor Market.

And, again, just as we had seen around the February reversal, as those U.S. rate expectations moved lower on the back of worsening data, risk trends got another shot-higher: Stocks rallied and Gold popped-higher as it became clear that we’re probably still going to be seeing an accommodative Federal Reserve. 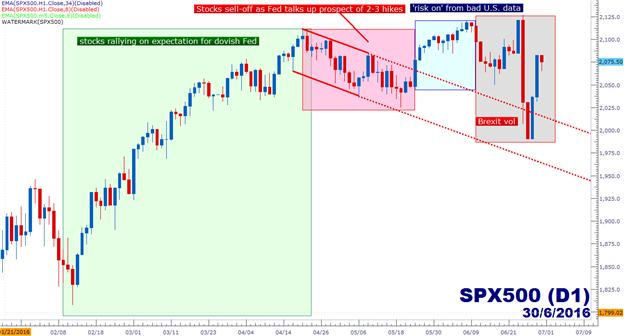 And it might be easy to rest on the assumption that the Fed will stay accommodative if it weren’t for the fact that the bank has shown a persistent type of hawkishness over the past nine months that should be difficult for traders to ignore.

There are Fed meetings in Q3 on July 26-27 and September 20-21; and while no actual moves are expected at either, each presents an opportunity for the Fed to transmit dovishness or hawkishness to markets; and this will likely continue driving risk trends in either direction. Also of note, keep in mind that the Fed can move markets even outside of meeting-windows. Random commentary from Federal Reserve members through media engagements could provoke big movements in markets, and this is something traders need to remain cautious of as we move into Q3.