European Equities Continue to Lag Behind U.K. in Post-Brexit Bounce

- A continued bounce in GBP and Equities is bringing the world back from the ledge after last week’s Brexit referendum.

- While recoveries are being seen in many markets, deviations and indications through price action may be highlighting a pertinent theme, as European equity has been and continued to be weaker than those from the U.K.

On the fourth day after Brexit, many global equity markets continued to their post-Brexit bounce higher with notable gains being seen in Asia. However, one of the more interesting observations is the fact that European bourses have continued to lag behind those from the U.K., and much the rest of the world for that matter. On the chart below, we’re looking at the UK100 (FTSE100) against the Euro Stoxx 50 index. 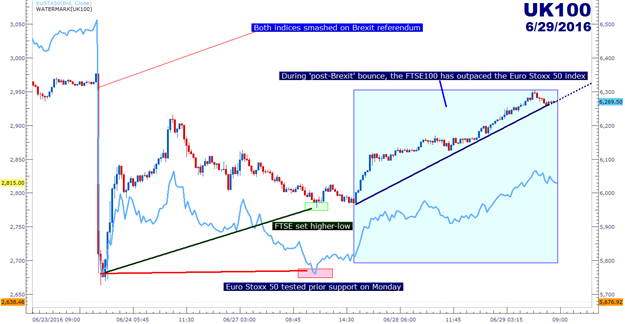 This raises the very legitimate question as to whether a Brexit scenario may bear more risk moving forward for the U.K., or the European Union that they’re choosing to leave behind. I say a ‘Brexit scenario’ because there isn’t much certainty around the negotiations to actually execute Brexit, as most signs are currently pointing to the prospect of having to wait for Article 50 to be formally triggered until after a new Prime Minister is chosen. Mr. Cameron had previously mentioned stepping down in October, and with the Conservative Party leadership election expected to take place in September, it seems this is a likely period to begin expecting that leadership transition. After a new leader is chosen to head the Conservative party, they’ll assume role of Prime Minister at which point it’s widely expected that Article 50 will be triggered and discussions around disintegration may continue. But even this is uncertain, as British Politics have seen a noticeable uptick in volatility after the Brexit referendum.

Since the Brexit referendum, we’ve seen the FTSE100 make back 85% of the losses since last Thursday’s European Close: 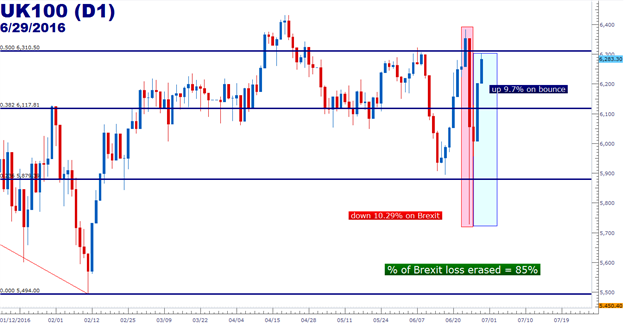 Meanwhile, the DAX sold off more than the FTSE around Brexit, moving lower by -11.5%; and the recovery has been far shallower as German equities have only moved higher by 4.8% off of the Friday lows; which amounts to approximately 37.3% of that Brexit move being retraced. 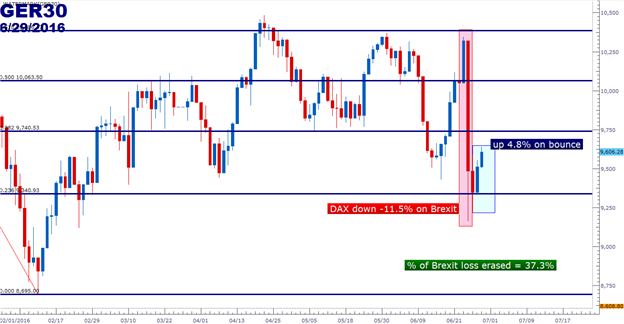 While Spanish equities have staged a healthy recovery from the Post-Brexit lows, the raw movement around the referendum was quite a bit deeper than what was seen in UK stocks, as the IBEX (ESP35) sold off by approximately -17.3% from the Thursday high to the Friday low: 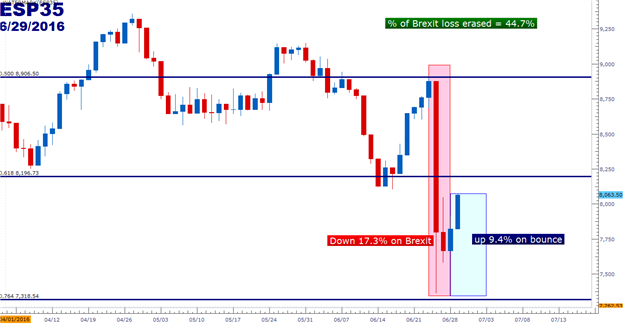 French stocks also staged a deeper dive lower than the FTSE100 and has staged a shallower recovery, seeing approximately 45.6% of the ‘Brexit loss’ erased since last Friday’s low. 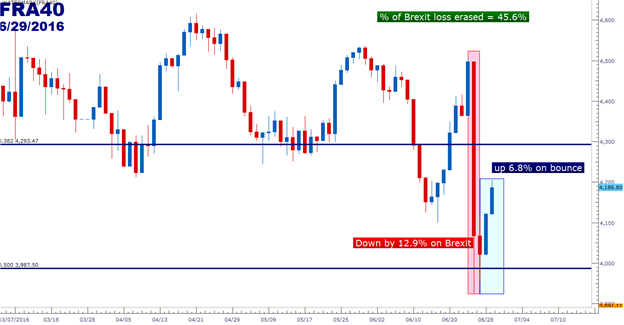 Markets are rarely completely random. While chaotic in the short-term, markets are relatively well-efficient with proper scope in the fact that information is going to be priced-in fairly quickly, and the ‘big’ players in the market that push considerable volume are rarely, if ever, going to pass up an opportunity to take advantage of inefficiency. This is why arbitrage does not exist for most of us. The fact that U.K. equities as seen through the FTSE100 moved down by less, and have recovered more sharply highlights the fact that Brexit may, in fact, be far more bearish for the European economy than the U.K.. And while we’re still in the very early stages of the ‘Post-Brexit bounce,’ this indication may be telling us something important.

One area for traders to continue watching the further development of this theme is in the EUR/GBP. The pair put in a meteoric jump around the results of the Brexit referendum, running into the 50% Fibonacci retracement of the 2009 high to the 2015 low. Should investors continue pricing-in a greater degree of risk for the European economy as opposed to the U.K., we could see the EUR/GBP down-trend coming back into markets. The level of .8100 could be especially attractive, as this is near the Friday close before this weekend’s gap, which remains unfilled at this point. 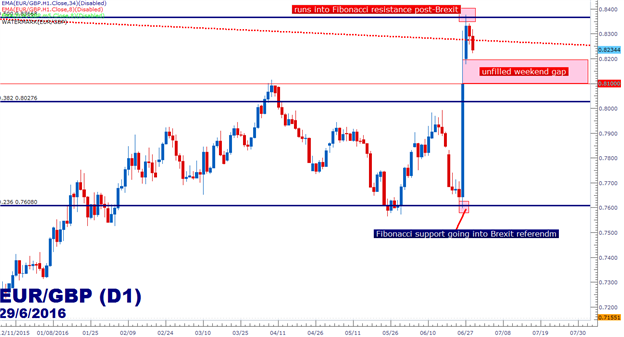