- FOMC and BOJ both held rates; but FOMC may not have been as dovish as what markets were looking for given the fact that equities have continued to sell-off in the wake of FOMC. The bank did not adjust 2016 forecasts while reducing expectations slightly for 2017 and 2018.

- We’re hosting a webinar today at 2:00 PM to discuss how traders can incorporate price action with positioning using the Historical SSI indicator. If you’d like to attend this webinar, it’s free and can be registered for with the following link: Historical SSI Webinar Registration.

Yesterday’s FOMC decision brought no change to rates, as expected; while also seeing a slightly dovish read given the reduction in expectations for rates in 2017 and 2018. However, the expectation for two hikes in the remainder of 2016 remained in the dot plot matrix, so markets may not have gotten the full-dove move that they were looking for by seeing that expectation reduced to one hike in the remainder of the year. Markets aren’t pricing in a greater than 50% probability of a rate hike all the way until January 2017, so the divergence between market and Fed rate expectations will continue to persist until something changes.

The US Dollar put in rather chaotic price action around the release, first catching support throughout the statement and press conference, and then beginning to sell-off towards the end of the US session. And this ran all the way until the Euro open, at which point the Dollar set lower-low support and began rallying. That rally hasn’t yet stopped as of this writing, and can be seen on the chart below: 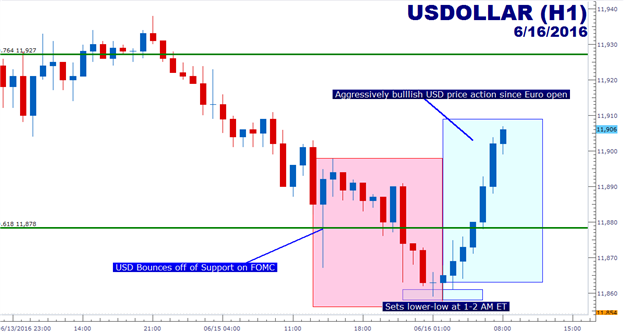 Another Central Bank meeting for which expectations were extremely low was in Japan. Shinzo Abe had previously stated that a ‘comprehensive, bold economic stimulus package’ was coming this fall, so it didn’t appear likely that the Bank of Japan would be making any moves here. And that lack of a threat of additional stimulus in the near-term removed resistance from the Yen (support on USD/JPY). However, traders should keep in mind that the Japanese Finance Ministry and Mr. Taro Aso have previously said that one-sided moves in the Yen will not be tolerated, inferring the threat of BoJ intervention in the spot market when the Yen gets especially strong. So attempt to be nimble as the Yen makes new highs and USD/JPY makes new lows: 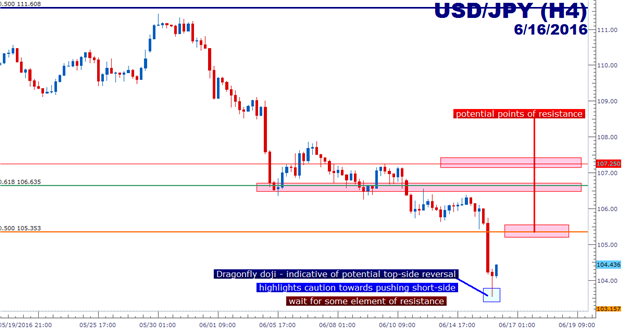 One of the biggest beneficiaries of yesterday and last night’s batch of announcements was Gold. Gold prices continued the top-side move that began in the early portion of the month after the most recent Non-Farm Payrolls report made it clear that we probably wouldn’t be seeing a hike at yesterday’s meeting. We had looked at the technical setup in Gold earlier in the week, and the chart below illustrates the updated setup with this morning’s fresh 22-month high posted on the chart. 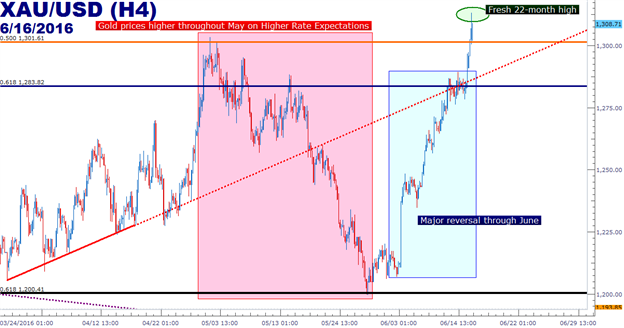 US Stocks Sold Off Throughout the Release/Aftermath

One highlight that shows that the Fed’s meeting yesterday may not have been as dovish as what markets were hoping for can be seen in US equities. On the chart below, we look at the S&P 500 around yesterday’s FOMC announcement. Notice the long-legged Doji that printed around the statement, followed by the aggressively bearish candle leading into a bearish price action formation of lower-lows and lower-highs through prior support. 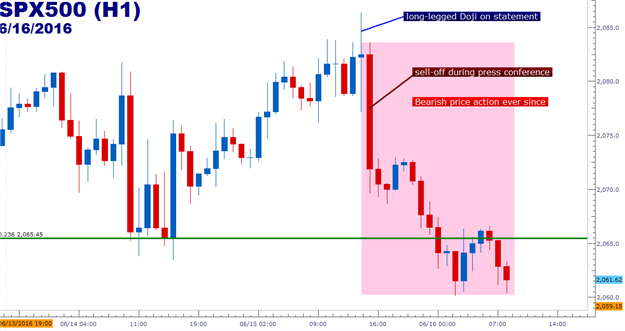 For traders looking for short equity themes, this may be more attractive

While the S&P is turning lower, there may be a more attractive venue for those looking to voice a bearish stance against US stocks. As we’ve been discussing of late, the S&P and Nasdaq 100 have been showing divergent themes on an intermediate-term basis. While the S&P was driving higher with higher-high and higher-low support, the Nasdaq 100 is working on a longer-term series of ‘lower-highs.’

On the chart below, we’re looking at the updated chart of Nas100, after the trend-line and Fibonacci resistance inflection two weeks ago. The Fibonacci retracement of last November’s high to February’s low has produced a series of levels that continue to show support and resistance; most recently with the 38.2% retracement providing support going into yesterday’s FOMC announcement. 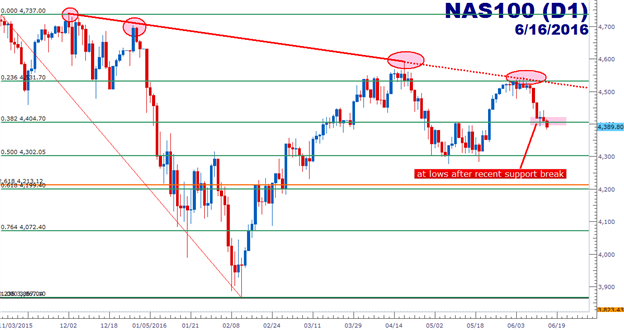