Stocks, Gold and USD Ready to Make or Break on FOMC

- This afternoon brings the June FOMC meeting at 2pm ET, followed by the press conference with Chair Yellen at 2:30 ET. The potential for volatility is extremely elevated.

- Coming into May, market rate expectations for the remainder of the year were extremely low; but the Fed kicked those higher throughout the month by talking up the prospect of 2 hikes in the remainder of the year, deductively making June a likely ‘sweet spot.’ But May’s Non-Farm Payrolls were abysmally bad, and now there is the question as to how strong the American recovery may actually be. This afternoon, Chair Yellen will share the Fed’s opinion on the matter.

At 2PM ET today, the Federal Reserve will release their most recent rate decision, and while no changes are expected to rate policy the accompanying details and press conference 30 minutes later could produce significant volatility; particularly in USD-pairs that have been on a veritable rollercoaster-ride over the past two months.

Just two weeks after the last rate hike in December, global markets put in collapse-like moves as the combination of a hawkish Fed combined with a slowing Asiaand utter carnage in commodity prices were too much risk for markets to bear. And given that the idea to hike rates a full four times in 2016, as the Fed had communicated coming into the year, seemed aggressive even when global equities weren’t putting in out-sized moves to the down-side, it became rather obvious that we’d eventually see the Fed relent. This happened in February and then again in March at the previous FOMC rate decision with an accompanying press conference and economic projections; and at this meeting the Federal Reserve revised their expectation down to two rate hikes in 2016 from the previous expectation of four. And this simple act of adjusting their expectation lower functioned as a form of dovish motivation for equity markets to move higher under the premise that loose monetary policy might be around in the US longer than initially hoped. This propelled the S&P 500 to fresh highs as we came into the month of May.

But as we entered the month of May with many equity markets having rallied for the previous three months, the Fed began talking up the prospect of rate hikes again with an eye on this June meeting. The Fed even went so far as to say that they felt that markets were underpricing the probability of a move in June, and this theme brought considerable strength into the US Dollar throughout the month as traders factored in the higher-probability of a rate hike in June or July.

The Non-Farm Payrolls report released at the beginning of June was abysmally bad, and this re-fired questions around the recovery being seen in the American economy. Those expectations for a rate hike that had driven higher throughout the month of May dwindled lower as it became obvious, again, that the Fed probably wasn’t going to hike rates in the face of slowing data.

So, while no actual rate hike is expected today, what the Fed says regarding the state of the American economy will be key as this will likely guide their rate hike expectations for the remainder of the year. As we saw in March, the Fed could potentially offer dovish motivation to markets by decreasing their expectation to one hike this year. But the Fed may be in a position of wanting to be long flexibility; as in, they may want to keep that expectation at two hikes for the remainder of the year so that they have the flexibility to decrease that expectation later should signs of slowdown begin to increase (essentially using forward guidance as a policy tool).

As we move into FOMC, the US Dollar is finding resistance at a lower-high of 76.4% of the May rally. The chart below illustrates the recent rollercoaster ride in the Greenback as driven by expectations around the Federal Reserve’s rate policy. 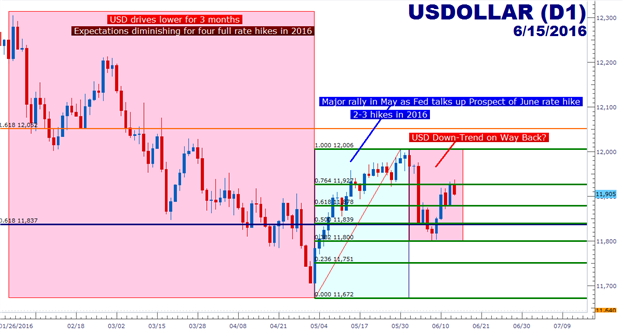 But this volatility hasn’t been relegated to the US Dollar or just the Forex market. On the chart below, we’re looking at the S&P 500 as driven by these expectations around the Fed and USD. Notice the quick vacillation on the right side of the chart as May saw the S&P trend lower as the Fed talked up the prospect of a June hike, only for the S&P to break out higher as we came into June and saw those rate hike expectations diminish. 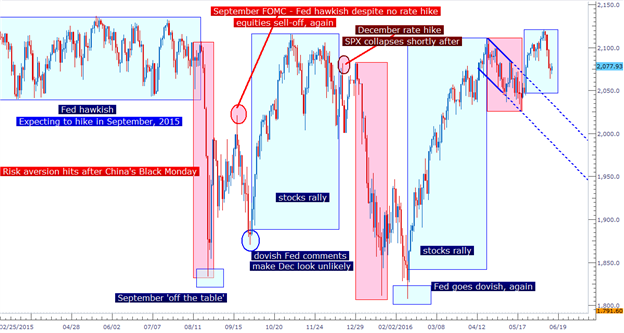 Another market that’s seen heightened volatility of recent around this vacillation around rate hike expectations has been Gold. Gold popped higher in an aggressive manner earlier in the year as rate hike expectations were getting priced-out of markets. But in May, as the Fed talked up the prospect of higher rates in June and the remainder of the year, that up-trend in Gold got smashed as the yellow metal traded lower by more than $100 during the month, moving from a high above $1,300 to find support on a long-term Fibonacci level at $1,200.41.

But as that support came-in, and as rate hike expectations dwindled lower as we moved deeper into June, Gold began to pop higher again as markets further priced-out the prospect of a Fed rate hike. Gold prices are now nearing those prior highs, and current price action is at a very interesting area of resistance. The level of $1,283.82 is the 61.8% Fibonacci retracement of the 1999 low to the 2011 high in Gold. There is also a projected trend-line connecting the March 28th low to the April 19th low that was previously support that current price action appears to be battling with; so we can’t quite say that this is a form of resistance yet.

For traders that do want to look for a dovish move from the Fed, long Gold could be one of the more attractive venues for trading that theme; and on the converse, traders that want to look for the Fed to remain relatively hawkish (which could be simply keeping expectations at 2 hikes for the remainder of the year), looking to get short of this potential resistance could be an amenable way of looking for that theme. 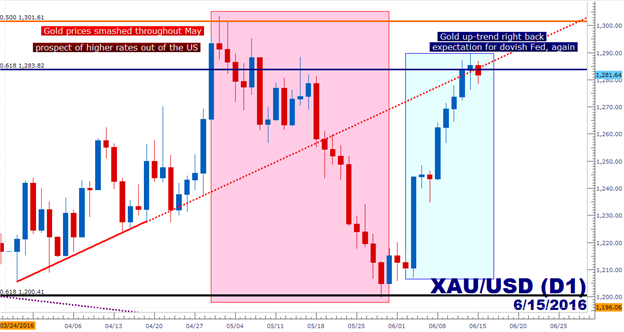